Duncan Robinson estimates he’s lost 200 pounds since 2012. He didn’t own a scale or visit the doctor regularly, so he isn’t certain what his highest weight was, but he knows he isn’t going back.

A mysterious knee injury led him to the doctor’s office, where he heard the same lifestyle-change advice he had heard for years, but this time it was different.

This time, he said, he was ready to hear it.

His doctor estimated he was eating 5,000 to 6,000 calories a day – twice the recommended intake for an adult male – to maintain his weight. The doctor pushed Robinson to get gastric bypass surgery, but Robinson refused to accept surgery was his only option.

“I needed to prove to myself,” he said, “that I could do this without surgery.” 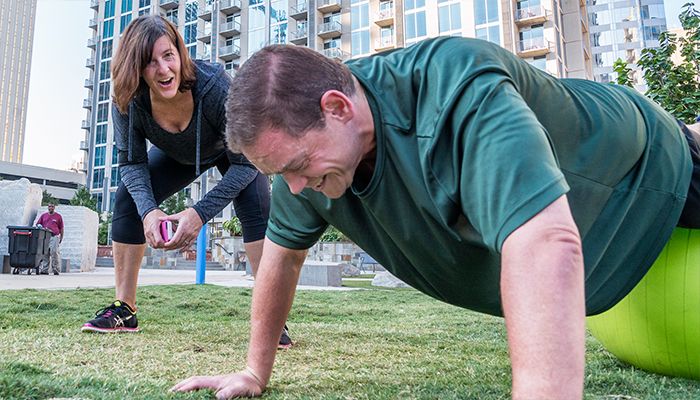 Today, he weighs roughly 215 pounds. The first 70 pounds fell off quickly when he began physical therapy for his knee pain (the cause of which is still unknown) and started eating less. He was able to eat less than 3,000 calories a day by eliminating the meals and snacking he called over the top – for example, eating two pizzas in a sitting. Robinson did something many people talk about doing but are unable to accomplish – reach their weight-loss goals. Here’s how he did it.

Robinson, 39, said he wrestled in the 140-pound weight class in high school, but he started gaining weight in college. He lived an active lifestyle and ate balanced meals when he lived with his parents. At University of Michigan, he found himself tied to his books and eating carelessly from all-you-can-eat campus cafeterias.

He's since adopted healthier eating habits. He was working for Constellation Energy in Baltimore, in 2012 when he started attending Weight Watchers at his office. The group meetings gave him accountability and new ideas. He started eating more fiber and vegetables to stay full and feel good throughout the day.

After moving to Charlotte to work as a nuclear engineer for Duke Energy in 2014, he continued attending Weight Watchers meetings.

“I’m regularly surprised by going to the meeting and talking to people,” Robinson said. “I almost always leave with some kind of nugget whether it’s a recipe or mindset trick.”

Robinson tracks everything he eats in the MyFitnessPal app. He prepares his weekly meals on the weekend and always has snacks stashed in the office. A few of his staples include turkey jerky, tuna, Muscle Milk and Quest bars.

Every Tuesday he walks a few blocks to the 7th Street Market in Charlotte to pick up a box of fresh, seasonal produce. The box and whatever lean meat is on sale determines what dinner will be for the week. He said he and his girlfriend, Katie Hamm, enjoy coming up with new recipes and cooking together.

Duncan and his girlfriend, Katie, enjoy testing new recipes and making up their own. Two of their recent favorites are a sweet tea brined pork tenderloin and a sweet potato hash. Click here to try out the recipe yourself!

“I lean on whatever healthy stuff manifests itself,” he said. “I end up getting new ideas, and I can be creative and have variety.”

Robinson said he’s become quite the gym rat, too. He wakes up every day at 5 a.m. to go to the gym before work and sometimes goes back after work. He has a variety of options at the gym between group fitness classes, cardio, workouts in the park with his personal trainer, Monica Young, and his current favorites, yoga and sand volleyball.

He said he wasn’t always a morning person, but he’s come to enjoy his routine and stays motivated by his goals. Not only would he like to lose an additional 40 pounds, Robinson wants to have the freedom to travel comfortably and have children.

A 20-mile hike to Mount Ngauruhoe in New Zealand, the fictional Mount Doom in the “Lord of the Rings” movies, inspired him to see more of the world. His next travel goal is a multi-day hike more than 13,000 feet in elevation through Peru’s forests and fog to ancient Machu Picchu.

“That’s my new mindset with fitness goals,” Robinson said. “Take advantage of the world and do things I didn’t think were possible otherwise.