It was 3 a.m. and Justin Jaques lay awake staring at the ceiling and thinking about his commute to work. The day before it took 30 minutes more than the usual 45 minute drive from his house in Tega Cay, S.C., to Catawba Nuclear Station in York.

“There has got to be a better way,” he thought.

Then it hit him: By highway, his commute is 19 miles, but as a crow flies over Lake Wylie, the trip is only 3 miles. So, he bought a yellow kayak and put his plan into action.

He decided to make his own triathlon of sorts. From his front door, he walks about 10 houses down where neighbors who live on the lake allow him to store his kayak in their backyard. He paddles about a mile to a marina where the owner lets him store a bicycle and his kayak. From the marina, he pedals his bicycle another 2 miles to the plant.

Jaques, who is a former Navy diver, repays the favor to the marina owner by fetching lost items – cell phones, keys, jewelry, etc. – from the bottom of the lake.

“George, the gentleman who owns the marina, laughed at me at first,” Jaques said. “He said, ‘If you’re crazy enough to paddle across the lake, you’re welcome to leave your bike here when you do.'"

His route is roughly 10 minutes faster than his rush-hour commute. When traffic is light, the triathlon takes him about 5 minutes longer than driving, but Jaques said it’s better than sitting in traffic. 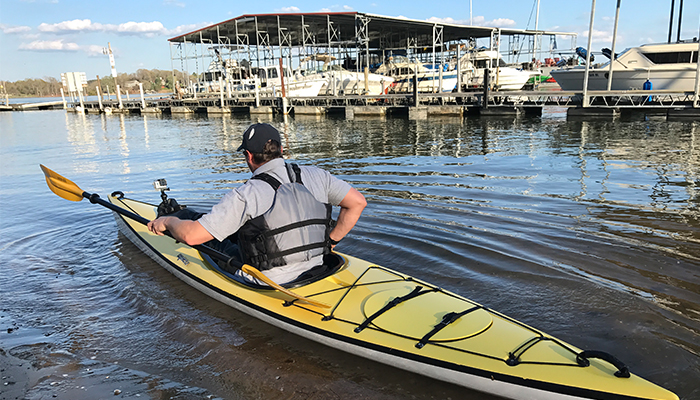 Justin Jaques paddles and bikes from his home in Tega Cay, S.C., to Catawba Nuclear Station to avoid traffic.

Jaques alternates between 12-hour day and night shifts as an operator at Catawba Nuclear Station, so he’s often commuting during strange hours. He said he occasionally sees fishermen in the morning, but at night, it’s more likely that he’ll only see fish and a family of muskrats.

After two years, he has worked out most of his commuting kinks. When it’s dark, Jaques wears a headlamp. If it’s foggy, he uses the compass on his cell phone. If it’s cold, he bundles up. Once, a brown water snake curled up in his sit-in kayak, but now Jaques uses a cover.

He won’t, however, make the trek in the rain, and if his kids have soccer practice after school, he’ll drive to work so he’s at their practice on time.

“It’s a lot better than sitting in traffic,” Jaques said, “and I don’t feel guilty about not going to the gym.”