On Cicely Hart’s first day as an engineer at Duke Energy, she thought past the technical and wondered, “How can I be a leader?”

Twenty years later, Hart is vice president of region support for Duke Energy’s Midwestern service areas, including parts of Ohio, Indiana and Kentucky, and she’s committed to sharing what she’s learned about leadership with others. She’s responsible for health and safety protocols, several engineering functions, workforce development for lineworkers and other crews, and project management for grid improvement. 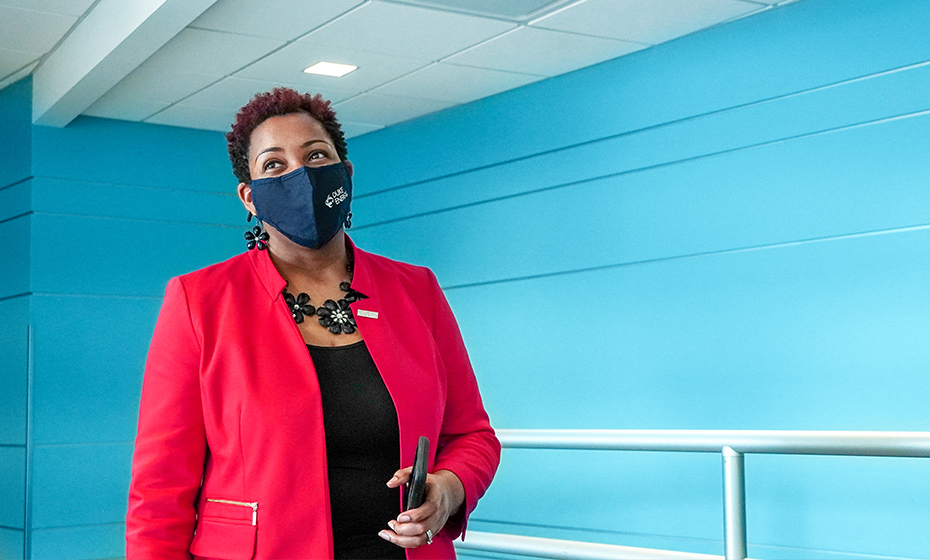 During storms that cause widespread power outages, Hart is responsible for operations, which includes determining the estimated time customers can expect power to be restored and ensuring the company has enough crews ready to respond once the storm passes.

She began her role in January 2020 –two months before the pandemic began and three months before a spring storm knocked out power to more than 300,000 customers in the Midwest. She has led her team through the pandemic as they implemented health and safety guidelines to keep crews safe.

“We made sure teams had access to everything they needed,” Hart said, “and that they knew we would keep them safe.”

Because storms are unpredictable, her team is continuously planning so they have the equipment and trained crews ready. When the storm does hit, it’s an around-the-clock operation to restore power as quickly and safely as possible.

“I consider myself a customer,” she said, “who would want someone to work feverishly for me.” 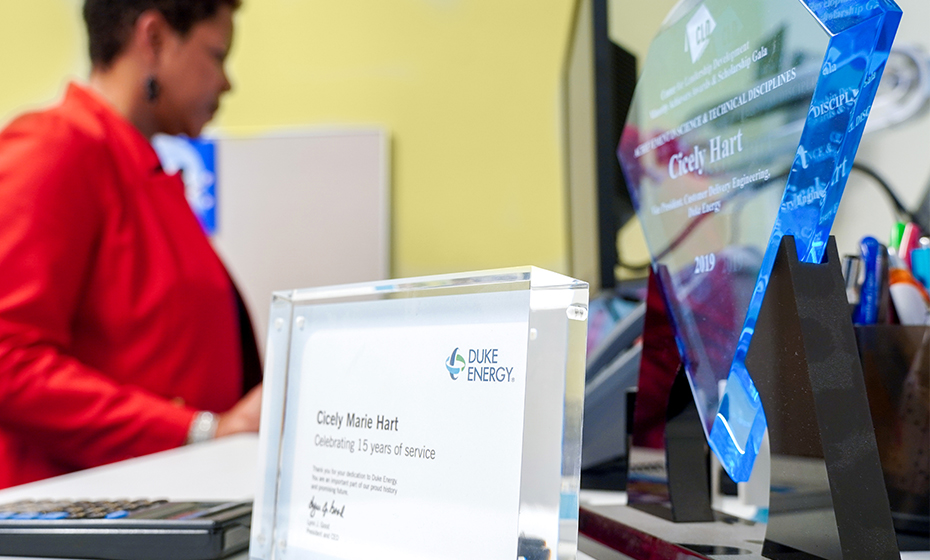 Hart has committed her career to helping others succeed in their roles. She also founded the company's regional employee resource group for African Americans in Plainfield, Ind.

Hart’s office in Plainfield, Indiana, is decorated with photos of her family and her MBA graduation along with several plaques that show her commitment to community service and Duke Energy’s employee resource groups. These groups foster an inclusive workplace by giving employees a way to connect with others. Hart founded the company’s group for African Americans in Plainfield and has been a member of the groups for women, Latinos and LGBTQ support.

As she reflected on her ambition to lead as a young engineer, she now knows each role – whether part of her job or as a volunteer – has prepared her.

Hart, a Purdue University graduate from Indianapolis, learns from her teams and lets them know she’s there to help them achieve their goals. 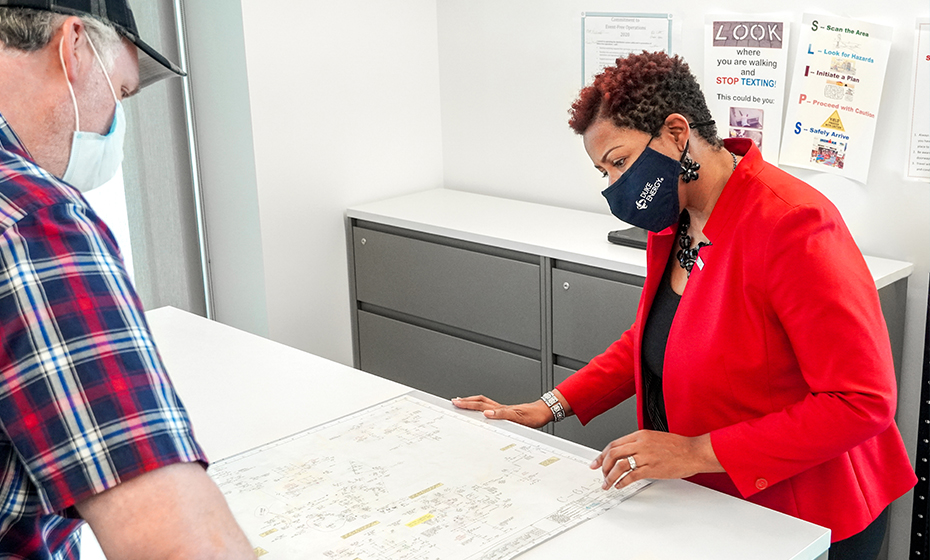 Hart has held several roles in engineering and operations helping to build a resilient, smarter grid.

Part of her mission as a leader is to help others – especially women – advance.

Hart has been a role model for Ash Norton, who’s in one of Hart’s previous roles: director of asset management. Norton, also an engineer, worked for Duke Energy for 12 years before leaving to raise her children. After a year and a half working as a part-time consultant and stay-at-home mom, Norton applied for a job on Hart’s team.

Norton said Hart has helped her learn how to manage her responsibilities as a working mother and leader. Hart has showed her that while there might be times you need to prioritize your family, you can do that in a way that allows your team to be successful.

For example, Norton watched Hart cover the highest priority items on her to-do list and allow her team to help with the rest if she needed to step away to care for a sick child. In doing that, she realized the work would still get done and others had an opportunity to grow.

That example, Norton said, relieved some pressure to be perfect. She learned through Hart that sometimes the way to accomplish everything is not by doing it all yourself but by creating a team you can rely on. 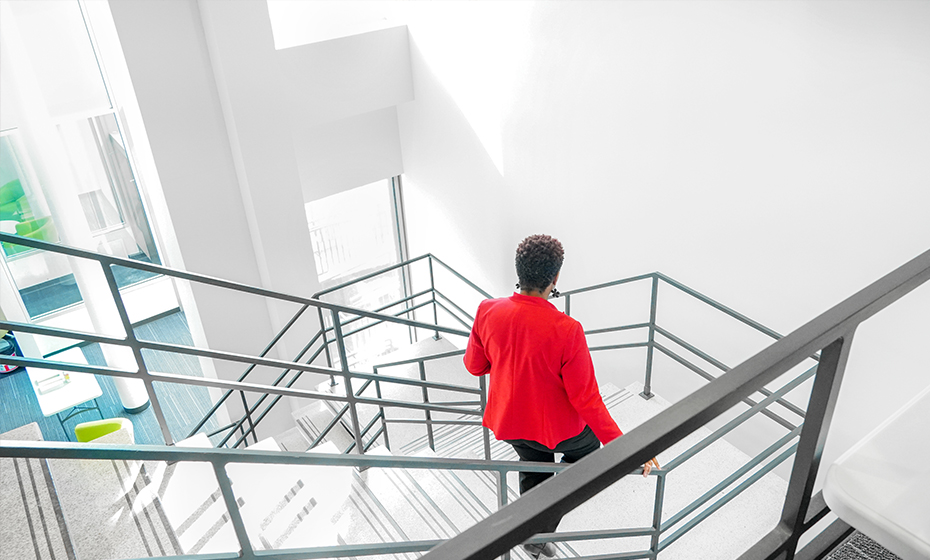 As a leader, Hart asks herself how she can be the type of manager she would have wanted as a young engineer.

“What makes her such a great role model for me, is that her leadership is aspirational but real at the same time,” Norton said. “It helps you see how well she does so many things, but she’s so authentic when she needs someone to help that it makes it attainable for you to strive for that excellence.”

For those looking to lead, Hart suggests taking the time to learn your field and look for opportunities to try new roles that will expand your skills. For those in leadership? Her advice is to reach as you climb.

“Make sure you reach back to a young lady, an engineer or African American,” she said, “to make sure they know they’re supported, and we’ll do everything we can to help them develop as well.”