As an avid yachtsman for more than 40 years, John Lehman has sailed in Puget Sound, Key West and the Bahamas and even crossed the Gulf of Mexico. Most of the excursions are for exhilarating recreation.

An exception is the Harvest Moon Regatta off the coast of Texas, where the 150-mile voyage raises money to fight ovarian cancer. Lehman, a quantitative analytics manager in the fuels procurement division at Duke Energy, was one of hundreds of skippers to set sail for the cause. He plans to compete in this year’s sail-a-thon Oct. 5.

Located near Galveston, Texas, the Lakewood Yacht Club has sponsored the Harvest Moon Regatta since 1987. The sail in the Gulf of Mexico has grown from 17 boats the first year to more than 260 boats in recent years. In 2010, the regatta began the sail-a-thon to benefit Judy's Mission to end ovarian cancer, in memory of one of the club’s most devoted sailors, Judy Robinson. In 2009, Robinson was diagnosed with advanced stage ovarian cancer and died in 2010. Judy’s Mission emphasizes early detection. Otherwise, the cancer is difficult to treat.

“Judy loved to sail and loved to compete,” said Lehman. “She fought hard to beat the cancer, but sadly, it was detected in the latter stage.” 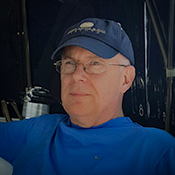 Lehman experienced the loss of another significant person in his life, the minister who married him and his wife, Betsy, in 2015. Rev. Suzanne Reedstrom was diagnosed with ovarian cancer in 2008. Lehman said she fought many years, but the cancer finally took her life in January. Both times he competed in the regatta were on her behalf.

“Susie’s cancer was identified fairly early as a result of her persistence with doctors. She kept telling them, ‘I don’t think you have the right diagnosis.’ She lived longer than the average,” Lehman said. “In the midst of her battle, the cancer was in remission. It’s difficult to see a person who loved life and gave so much to others die way too early.”

In 2016, Lehman’s 47-foot sailboat, Force Majeure, completed the regatta trek in near record time – less than two days. Lehman’s six-person crew finished second in a group of six boats and third overall in the cruising spinnaker class, having sailed from the Galveston Pleasure Pier to Port Aransas near Corpus Christi. 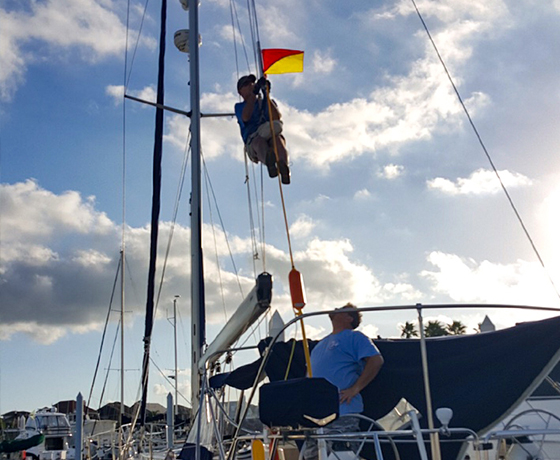 “It was amazing that we completed the race in a very fast time of 20 hours; it can take up to 36 hours,” Lehman said. “The weather was ideal.”

Lehman received a more meaningful trophy than the second-place finish. His team finished first in fundraising at more than $3,400. Part of the amount was matched by Duke Energy.

“That’s the trophy I’m most proud of,” Lehman said. “It means a lot to know others want to partner with us in helping fight this terrible disease.”

In college at Sacramento State, Lehman sailed dinghies in nearby lakes, which began his love of sailing. In graduate school at the University of Washington, he sailed larger vessels. He’s been the captain of his ship since that time. 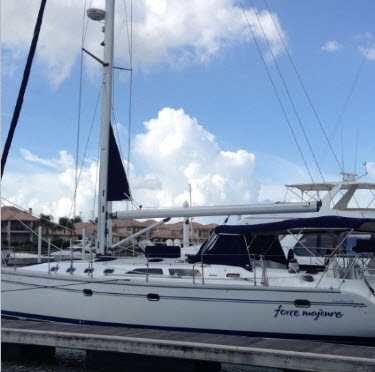 “I’ve worked in the gas and power production field for many years. Weather and natural disasters often meant uncontrollable events for which no party was responsible,” Lehman said. “Therefore, I named my boat Force Majeure, which means ‘irresistible force of nature.’ So far, I haven’t encountered another with the same name.”

Lehman intends to continue racing in the sail-a-thon and raising money to prevent ovarian cancer as long as the weather cooperates. As for the long term, he plans to work at Duke Energy for a number of years. And when it comes time to retire, living on his sailboat is his dream. He and his wife may sail off into the sunset; or perhaps it will be a sunrise.

There is no adequate screening test for ovarian cancer, which is one of the reasons that this cancer is often discovered in later stages. Symptoms may include bloating, pelvic or abdominal pain, difficulty eating or feeling full quickly, and urinary urgency or frequency.

A woman should talk to her doctor if symptoms last more than two to three weeks. She is her best advocate.