Heidi Schmidt grew up in New Orleans in a family who loved water sports. But the violence of sea water upended her family’s life in 2005 and set her adrift. It took Schmidt years to find joy again, on the calm waters of Lake Wylie, North Carolina.

What’s more, she shares her healing with a stand-up paddle boarding business that has helped others face hardship. She calls it Anchored Soul. 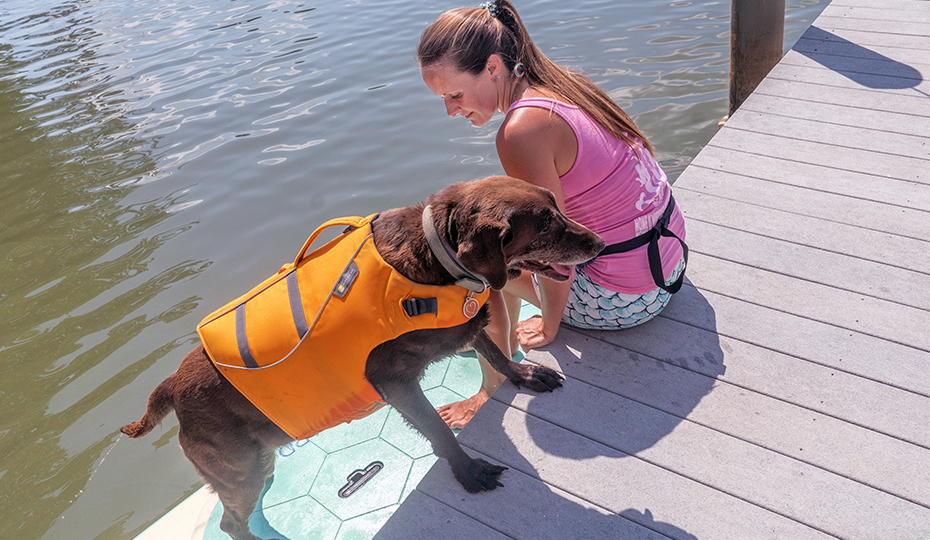 Heidi Schmidt with her dog, Rolo.

Schmidt, a human performance specialist at Duke Energy, was a University of New Orleans civil engineering major when Hurricane Katrina hit on Aug. 29, 2005. The storm killed more than 1,800 people and left 80% of her hometown submerged.

Fortunately, the Schmidts had evacuated to Shreveport. With their family of five, plus grandparents, a friend, a Labrador and a cockatoo all squeezed into 600 square feet, they watched TV as Katrina made landfall.

“It was excruciating to watch that storm devastate the only home that I ever knew,” Schmidt said. Their house sustained some damage and later a break-in, but with no jobs or schools to return to, her family relocated to Kingsport, Tenn. A sister stayed behind in Shreveport to finish school, and Heidi Schmidt enrolled at Tennessee Tech in Cookeville, three hours away. Katrina had separated her family for the first time. 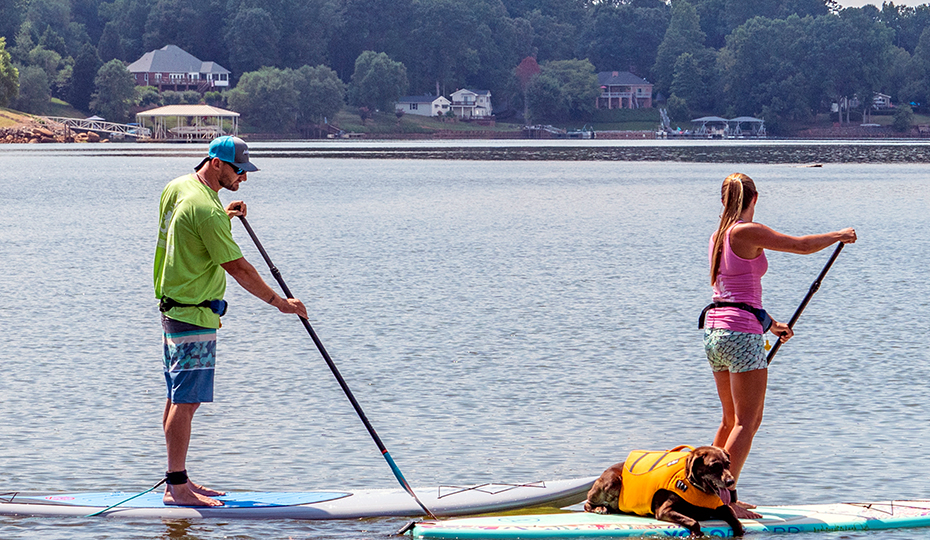 Heidi Schmidt and Duke Energy colleague Sean Christopher Cole, who learned stand-up paddle boarding with Schmidt 2-1/2 years ago and helps her with events.

Upon graduation, Schmidt found a job at a nuclear plant in Spring City, Tenn., but four years after Katrina, she still felt lost, unconnected. She had to find “something that made me happy.”

Then, her aunt in Florida emailed an article about stand-up paddleboarding – an offshoot of surfing in which the person stands on a board and paddles through flat ocean water or on lakes and rivers.

Schmidt ordered an 11-foot board without even trying it. The day it was delivered, she took it out on Watts Bar Lake, her Labrador barking on shore. She slowly stood.  “For the first time in a very long time,” she said, “I felt at peace.”

About the same time, Schmidt took a job at Duke Energy and moved to Belmont, N.C., where she opened Anchored Soul. 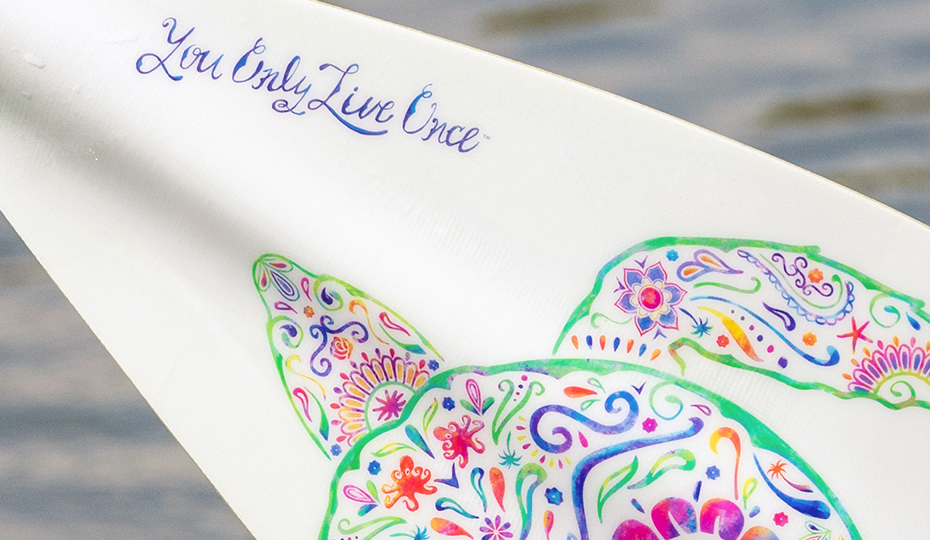 One by one, she saw clients change as they worked together. One left an abusive relationship, another navigated a divorce, and one lost weight. Then there was Donna Hovis, who was grieving the death of her 20-year-old son.

Andy Hovis was an avid skateboarder and Bob Marley fan. While driving to school on Dallas-Cherryville Highway in 2014, he was hit head-on.

Schmidt let her cry and hugged her. Hovis also was standing on a board; that reminded her of Andy’s skateboarding. And, Schmidt was playing a Bob Marley tune the day Hovis arrived.

“I felt like I was back in Andy’s bedroom with his music playing,” Hovis said. 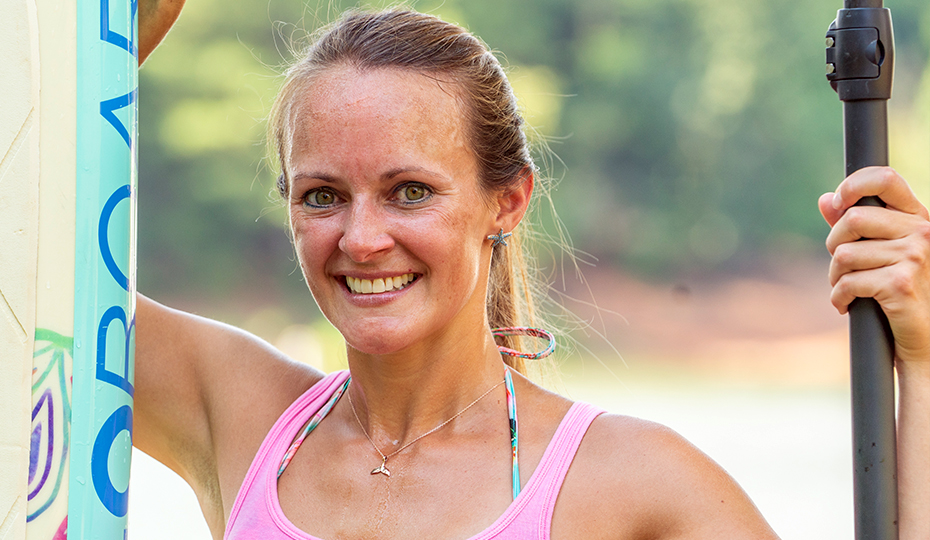 With paddle board, Heidi Schmidt said, “I felt at peace.”

This summer Schmidt reached further. She’s teaching young people from the Boys & Girls Clubs of Greater Gaston, an organization that builds character, confidence and other life skills. “I needed to find those kids who feel completely alone and need a place to go,” Schmidt said.

The confidence builds quickly, club volunteer Jennifer Beatty said. One boy who couldn’t swim was afraid to stand on the board. But after lessons in water safety, paddling and a few falls supported by a flotation device, she said, “He emerged with the biggest smile on his face. “

“We all have struggles,” Schmidt said. “You just have to find out what works for you. For me that’s paddleboarding, and I’ve found that works for a lot of people.”

But there’s a bigger life lesson, Schmidt said. “You can’t stop the waves, but you can learn to surf.”

Heidi Schmidt is holding the Bon Temps Paddle Battle on Wylie on Aug. 24, 2019 in Belmont, N.C. The race is open to all paddleboarders for a fee. Schmidt will sponsor any Boys and Girls club members. Proceeds benefit nonprofits including Boys & Girls Club of Greater Gaston, Catawba Riverkeeper and Tri-County Animal Rescue. Click for details.