Workers at Goodwill Industries are dismantling and recycling Duke Energy meters that have been replaced with smart meters.

Goodwill Industries of the Southern Piedmont's new facility in Charlotte.

Residential meters that are being replaced are recycled.

Steven Greene enters meters into a computer with a barcode reader.

Guillermo Sanchez sorts parts of meters into boxes for recycling.

Jermaine Wright moves a box of electric meters that will be recycled.

Work on meters for recycling.

Behold the power of a meter.

Those clear round cases attached to nearly every house are at the end of their well-lived lives, wrapping up decades of nonstop electricity tracking as energy companies replace them with digital smart meters.

And yet, they do not die in vain, but are instead fueling an employment boom at Goodwill Industries of the Southern Piedmont. Nearly every day for the last several months, a team of new employees at the Goodwill Opportunity Campus in Charlotte, N.C., is dismantling those old Duke Energy meters and parsing their pieces into recycling bins. Eventually, the work could grow to 1 million meters a year.

The work is clean, environmentally sound and treasured by the men who for so long have had trouble securing a job.

“When I came here, I was desperate – I didn’t come here looking for a job, I came here begging for a job,” said line operator Guillermo Sanchez. “I’ve been doing meters for a month. It has provided me the opportunity to experience the possibilities of teamwork.”

Duke Energy crews have been removing meters from homes and businesses in North Carolina and South Carolina, and replacing them with smart meters. The new meter can collect the same usage data as the old meter, but unlike the old meter which was read once a month, smart meters relay data hourly, giving customers more insight into their energy usage than ever before.

About the time the meter replacement began this summer, the Goodwill Opportunity Campus in west Charlotte opened. This 160,000-square-foot center has a credit union, health clinic, micro-loans agency, cafe and two resale stores. Taking up 50,000 square feet in the back is a warehouse, with 19 trucking bays and all the equipment needed to run a robust electronic waste recycling business, also known as e-cycling.

Goodwill already had e-cycle contracts with the city of Charlotte and Dell computers. Moreland and his AMI colleague David West were intrigued.

“I thought, 'Wait a minute, there might be an opportunity here,' ” Moreland said. “I thought, ‘I’d love to use an employer that hires local.’ All of this is intended to get low-income people jobs. This gives them the experience they need. … It’s been great for the community. It’s a win, win, win.”

The contract between Duke and Goodwill began in June with the hiring of about six employees, who now dismantle about 2,500 meters a day. As Duke’s upgrade spreads beyond the Carolinas, the workforce could grow to nine employees moving 4,500 meters a day, with a payroll that could eventually total in the hundreds of thousands of dollars.

“When the Duke Energy project came to us, we were very excited,” said Bill Hall, Goodwill’s director of Supply Chain & Donation Acquisition. “We knew we could do it, we had the space to do it and it would employ some individuals in the community and allow them to have some self-worth and feel good about themselves also.”

The workers have nearly perfected their assembly line process: Unload the meters off the truck and spread 50 on a table. Log each one into a computer for inventory accuracy. Pop off the plastic or glass cover and put into shipping box. Take battery (if there is one) out and place into a steel barrel. Separate screws. Toss the rest of the meter into another box. All components are loaded on a trailer and head to a recycler. 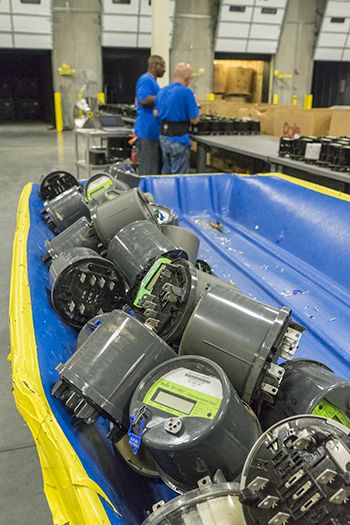 What’s striking about this job for so many of the line operators is the learning opportunity.

“From the first day,” Sanchez said, “we just clicked and we try to help each other and figure out a way to do the job better and faster and safer.”

The skills learned on the floor go beyond simple meter deconstructing. The employees must report on time, be productive and learn teamwork. In essence, they become employees others will want to hire one day.

“There’s a difference with Goodwill,” said Line Operator Jermaine Wright, who’s been on the Duke Energy project for four months after holding various factory, trucking and production jobs. “Goodwill is willing to train you hands-on, more than other companies that might just throw you in there and expect you to learn from other workers.”

At the same time, the line operators are getting exposed to the fairly new world of e-cycling, which Wright says “gives him a sense of peace.”

For Sanchez, he said he’s so hooked on the work, he hopes Goodwill becomes his long-term employer.

“I’m ambitious; I want to do more,” Sanchez said. “I hope I can do for other people what is being done for me right now.”