Melody Birmingham-Byrd was 22 when she vaulted into management, taking a job as a front-line supervisor at a General Motors plant in Rochester, N.Y. She oversaw members of the United Automobile Workers whose backgrounds were about as different from hers as they could possibly be – most were male, white, older and experienced.

But Birmingham-Byrd was determined to do right by her team, to provide the type of supportive, positive leadership she felt her parents never got in their assembly line jobs.

Despite her young age, she excelled. 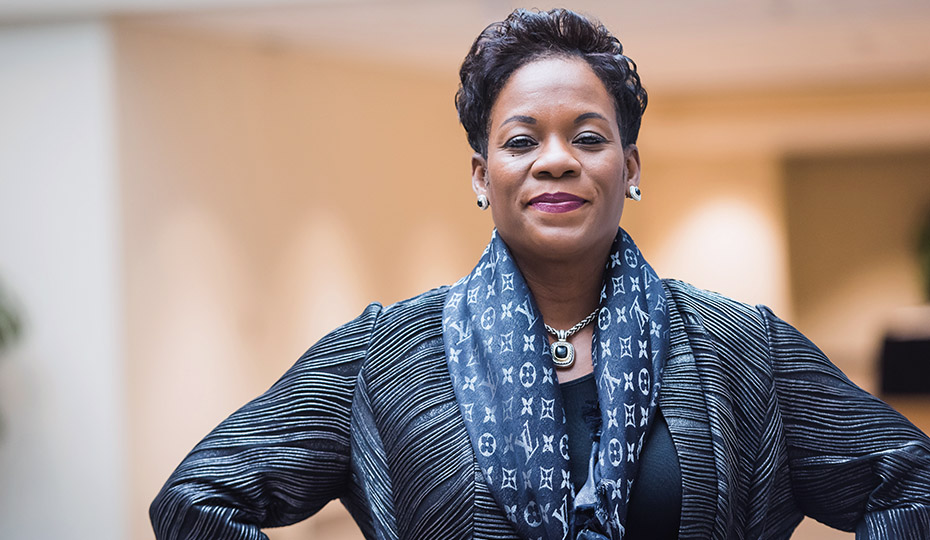 Now 25 years later, Black Enterprise has named Birmingham-Byrd one of the Most Powerful Women in Corporate America.

People who have worked with Birmingham-Byrd at Duke Energy, where she is senior vice president of supply chain and chief procurement officer, are not surprised.

“She has a national following,” said Stan Pinegar, who became Duke Energy’s state president in Indiana in November when Birmingham-Byrd took the position in Charlotte. “People sought her out. She really spent the time and made the effort to have an impact on a variety of people despite a very busy professional and personal life.”

Birmingham-Byrd credits her mother’s example for her journey, which began in 1994 when she was a new manufacturing logistics supervisor who didn’t know any better than to park her foreign-made Toyota Celica in the parking lot of an American car factory.

“People ask me, ‘Why do you work so hard?’ I do it for my Mom,” Birmingham-Byrd said. “I do it because she worked as hard as she did.”

During her childhood, her mother and father were assembly line workers at a bicycle manufacturer in Chicago. Birmingham-Byrd remembers her mother returning home after work, exhausted by the long hours and frustrated by what she considered unfair treatment in the workplace.

“Hearing about the many challenges that my parents had with work conditions and what they considered to be unfair treatment in the workplace, I wanted to be a part of something to make it better,” Birmingham-Byrd said.

“I knew, or at least believed, I had parents who were hard-working people. They were good people. They were fair and reasonable people. They worked hard for their family. And how they were treated provided me greater sensitivity and understanding for how others should be treated – with respect, dignity and fairness.” 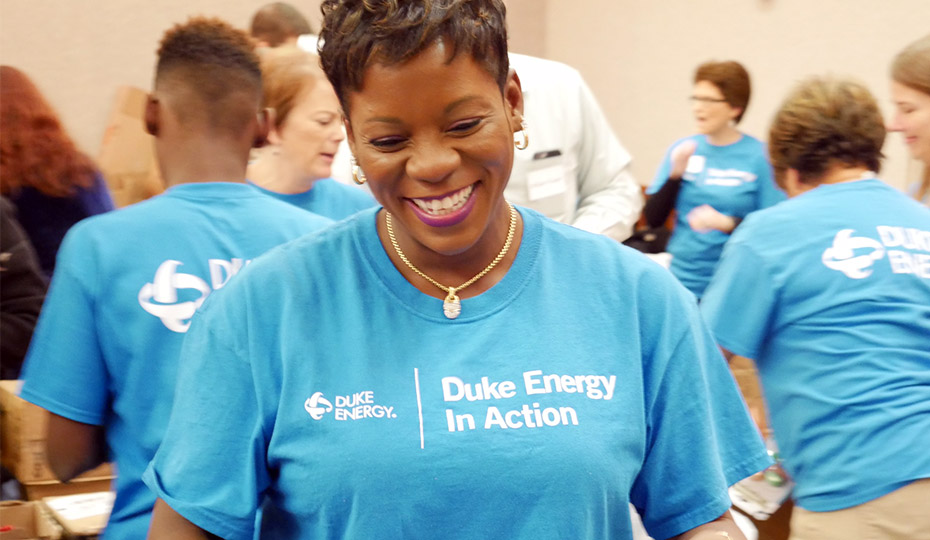 Birmingham-Byrd volunteering at a Martin Luther King Day of Service event in Indiana.

She wanted to be the kind of supervisor she felt her parents deserved.

Her mother and father had both moved to Chicago in the 1950s, during the second Great Migration north to escape segregation in the South. Birmingham-Byrd was the youngest of seven children.

“Although I’m the youngest, I will never be considered the baby,” she said. “I don’t think I’m what many would consider your stereotypical baby of the family. I’ve always been more reserved and, I think, more mature. My siblings would say that I’ve always been bossy, even as a child. My mother would probably say I was very responsible as a child.”

After graduating from high school, she worked summers and juggled jobs each semester to pay her way through Purdue University. She earned a degree in organizational leadership, after changing her major from accounting.

Two years ago, while she was president of Indiana operations, Duke Energy gave the Food-Finders Food Bank a grant to buy and distribute food to needy families in Lafayette, Ind. Birmingham-Byrd volunteered for the project and revealed that during college, she had turned to the nonprofit for help. 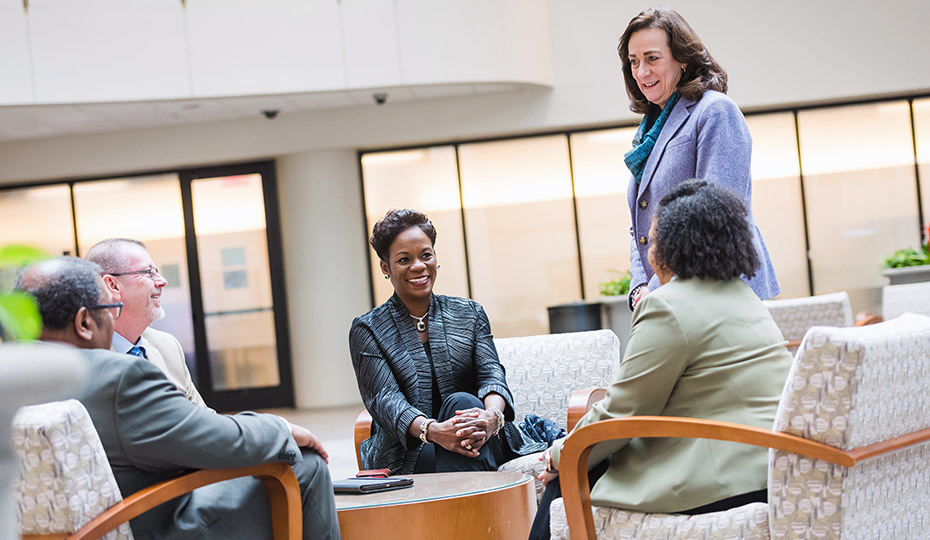 Tears welled in her eyes as she talked recently about how she had come full circle.

“You never know who you’re helping,” she said. “You don’t know people’s situation. I had student loans to help me pay for tuition, and I was working to pay for housing and utilities. Food Finders was a resource to help me provide food when having to pay for tuition and other expenses. … I have never been ashamed to admit that I needed assistance. I know that at some point in our lives, we’ll need help or we’ve been helped. I’ve never been too proud to acknowledge that.”

Because of her background, Birmingham-Byrd likes to root for the underdog. She also values diversity, and appreciates having worked with many different types of people over the years. She recalled an older, Irish, union employee at General Motors who consoled her after her father’s death. She was his boss, yet he told her: “You have us. We’ll be your dads.”

“There have really, really been great people I’ve worked with over the years,” she said. “That’s why I embrace diversity. I’ve worked many different places. Whether it’s New York, North Carolina, South Carolina, Indiana, Illinois, UAW, IBEW, automotive, energy, field or office, people have been great. Although people are different, what I have found is that most, if not all, people want to be treated fairly. They want to be treated with respect, to know that you value them, will keep them safe and will hold them and others accountable.”

Valerie Patterson, a regional communications manager for Duke, said Birmingham-Byrd approaches her job from “a place of caring,” and “with a quiet influence.” “She’s one of those leaders that you want to do a good job for,” Patterson said. “She makes you want to work harder and be smarter and do your best.”

Although Birmingham-Byrd said she loved working for Duke Energy in Indiana – “I had such an amazing and dedicated team in Indiana” – she accepted the new challenge in Supply Chain. She now oversees an organization responsible for $12 billion in annual supply chain managed spending, performed by roughly 900 employees across seven states. Her team supports six distribution centers, 481 inventory storerooms and executes about 430,000 purchase transactions annually, 1.24 million material issues and 218,000 material receipts.

In her new role in Charlotte, Birmingham-Byrd is a senior executive, but she said titles are not important to her. What’s important, she said, “is what I give to others in terms of accountability, compassion, support, and inspiration to build others up to meet their fullest potential to achieve the objectives of the team and of the company.” 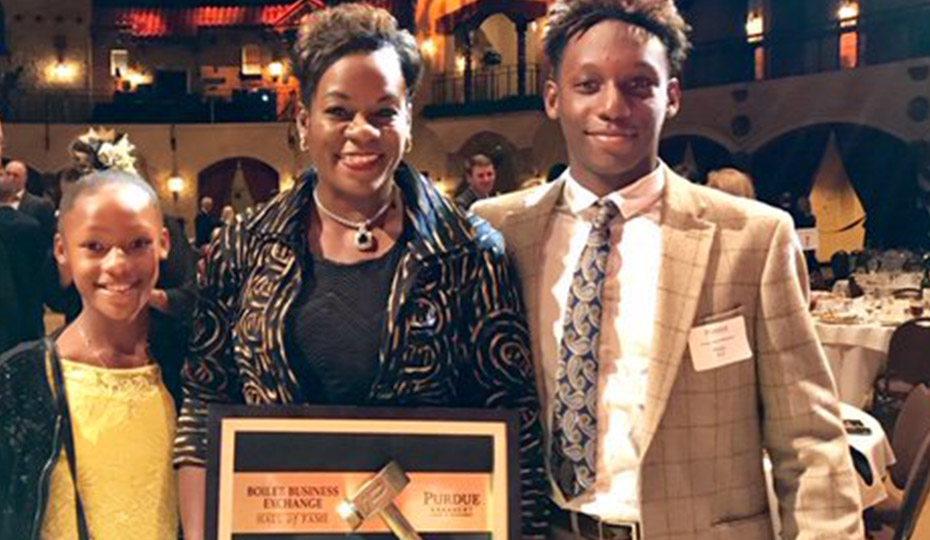 Melody Birmingham-Byrd and her children at the the Purdue University Boiler Business Hall of Fame ceremony.

Before she accepted the job, she discussed the move with her children. Her son is 14; her daughter, eight. She had warned them they might one day leave Indiana, and she said they supported her decision.

Here’s how Birmingham-Byrd said she juggles the demands of her job: Evenings and weekends, she and the children are “very intentional. I have a phones-down rule. We have family time. I try to make weekends our time. As much as I work, when I’m with them, I’m with them.”

Gone is the power suit, the heels, the makeup. Mom wears jeans and flip-flops.

Her own mother is now 83. Asked whether she is proud of her daughter’s accomplishments, Birmingham-Byrd explained that her mother adheres to the scriptural mandate that pride is a sin.

When Birmingham-Byrd left General Motors, the union workers she supervised showered her with dozens of hand-written thank-you cards – which she still treasures, along with other mementos, in a box of memories. At the time, Birmingham-Byrd showed the cards to her mother, and although her mother didn’t say anything, she smiled.

Quote: “Melody always made time for one-on-one contact with mentees, taking time to coach and counsel people of color (and those who are not), sharing her personal examples of how she has maneuvered through the industry and yet remained resilient while pursuing her dream.” –Marvin Blade, Duke Energy vice president for community relations in Indiana.