Emily DeRoberts calls herself the Forrest Gump of Duke Energy. She happened to be in the right place at the right time, allowing extraordinary things to happen to an ordinary person.

After 32 years with the company, where she started out as a field technician, she’s now government and community relations manager for Upstate South Carolina – “her dream job” –serving as the face of Duke Energy and serving on a variety of boards and committees.

Every year, she hands out an entire box of business cards, urging government officials, developers and residents to call her anytime day or night if they have a concern. And call her they do. 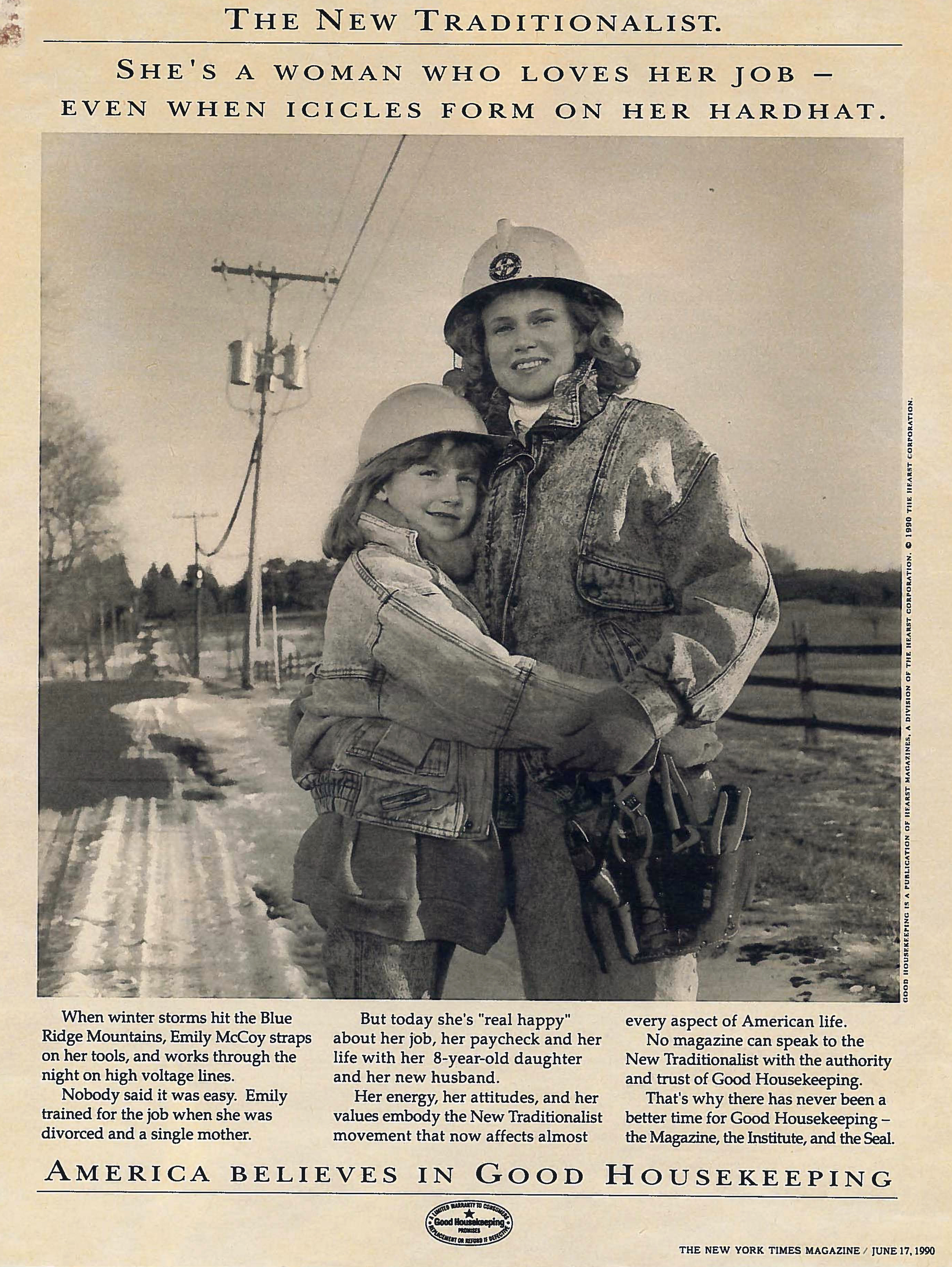 Emily DeRoberts and her daughter, Jenny, appeared in this ad in 1990 for Good Housekeeping in the New York Times magazine.

“Everybody who reaches out to me, I see as an opportunity to educate them about Duke Energy,” DeRoberts said. “It never is a bother or a waste of time. Almost to a person, anytime someone has a complaint or is upset or angry we are able to resolve it in a way that they are satisfied and understand more about their electrical infrastructure.”

She’s able to explain the infrastructure because she helped build it.

DeRoberts was a single mother in the late 1980s struggling to pay her utility bills when she enrolled at Greenville Technical College’s electronic engineering technology program. “I was divorced and broke and hungry,” she said. “At the time, the options for females were to work in retail or be a secretary. I just couldn’t do that. To sit in one place did not appeal to me.”

Shortly before she graduated, Duke Energy was looking to hire more women. DeRoberts and classmate Bonnie Macemore accepted jobs as field transmission relay and control technicians. Macemore is still with the company, working as a transmission contract oversight manager.

“I’m a girly girl and I’ve always been a girly girl,” DeRoberts said. “But I also knew that I had never made more than $4 an hour working in retail or other jobs. I knew I could make a lot better money working at Duke Energy. I did what I had to do – what any mom would do. Then I found I liked it. I liked hardware and understanding how things work. It was fascinating to me. … I lacked the physical strength a lot of times that I needed to do my job, but I figured out a way to do it.”

Call it a trial by fire. 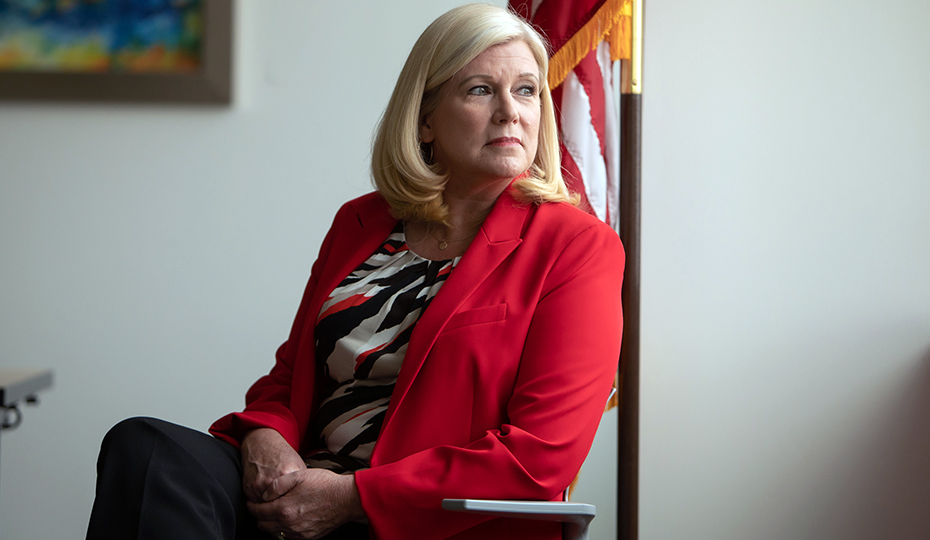 Emily DeRoberts says: “Take advantage of any opportunity for education that comes your way.”

As one of two women on an otherwise all-male crew, DeRoberts said she learned to dish it out as good as she got.

“They treated me like everybody else,” she said. “There was always a joke going on and teasing, playing harmless tricks on each other.”

She wound up falling in love with one of her crew members, David DeRoberts. They have been married for 21 years. “He picked on me so much, and made me cry so many times,” she said, “I made a plot to get even with him until death do us part.”

If you’ve figured out by now that DeRoberts has quite a sense of humor, you’re right. She believes humor is a key to survival.

“You spend more time with people at work than you do with your own family for the most part so you have to find a way to make it enjoyable, and humor is a way to do that,” she said. “Even engineers, believe it or not, have a sense of humor. A lot of times humor can release tension in a stressful situation.”

While working in the field building and maintaining transmission substations, her mentor approached DeRoberts with a proposal that changed the course of her career. Would she like to go back to school?

Shining a light on Emily DeRoberts

In her own words: “Child of God and lover of people.” (She and her husband, David DeRoberts, are founding members of The Mill Church in Pickens.)

She enrolled at Southern Wesleyan University in Central, S.C., in a program geared for working adults. She got her undergraduate degree in about 2 1/2 years and her master’s in another two years.

“My husband did homework with the kids and cooked dinner and went to their ball games and went to their dance recitals,” she said. The couple made a deal. If her higher education led to a better job, he could retire early. Four years ago, David DeRoberts retired from his job as a planner scheduler for Transmission.

Emily DeRoberts has no plans to retire. She said she’s the type of person who needs to be busy, and she loves what she’s doing.

It shows. “Everywhere I go, not only in our county but in other areas in the Upstate, Emily’s there,” said Pamela Christopher, president and CEO of the Anderson Area Chamber of Commerce. DeRoberts is secretary/treasurer of the chamber’s board of directors and won its 2019 ATHENA Leadership Award.

“She’s one of those people who steps in and says, ‘What can I do?’” Christopher said. “She totally gives back to this community more than anyone I know. She is engaged at every level so you never see her missing a step. She certainly sets the highest leadership example that inspires others and lights the path for others to follow.”

Customers appreciate her warmth and forthrightness, said Rick Jiran, vice president of community relations in South Carolina, who is technically DeRoberts’ boss but said: “I don’t think anybody’s the boss of Em.”

Jiran hired DeRoberts for her current job. “You will be hard-pressed to find anybody that has a passion for the customer greater than Em,” he said. “Our job as district managers is to represent the customer’s point of view with those stakeholders that we engage with. This is a role that Em sets the tone for the rest of our team. Nobody represents the customer, the customer’s emotions and the customer’s facts better than Em does. She personifies what this position is supposed to be.”

The fact that she rose through the ranks gives her a unique perspective, Jiran said: “She knows their language. She’s done the work. She’s been out there at 3 in the morning on outages. She talks the talk, but she’s walked the walk.”

“I’m the Forrest Gump of Duke Energy,” DeRoberts said, “in that extraordinary things happen to ordinary people. You have to be open to that and just go with it.”

It’s advice she readily gives to young women and men:

“Take advantage of any opportunity for education that comes your way.” And to women in particular who are considering work as transmission relay and control technicians, she offers: “Don’t let the stereotype scare you away. You don’t have to be a bodybuilder to do that job. We have the tools now that make up for your lack of strength. If you like working outside, if you like results, if you like providing service to people, it might be the job for you.”