It could have been the job from Hades, sifting through soil in hot, muggy, buggy Florida, perspiration soaking through steel-toe boots, hard hat and safety vest.

But Tanya French knew the land held potential for treasure, in this case, artifacts from the Native Americans who built a society on the land many centuries ago. She thought the on-site archaeologist was joking when he said the shell she found appeared to be an ancient cup or ladle. When he assured her he wasn’t, she threw her arms in the air and practically danced.

French, a senior health and safety professional for Duke Energy, was supervising a remediation project at the Bartow Plant when she found the cup. Thanks to her and others on the team, those artifacts were added to the Weedon Island Preserve’s collection. 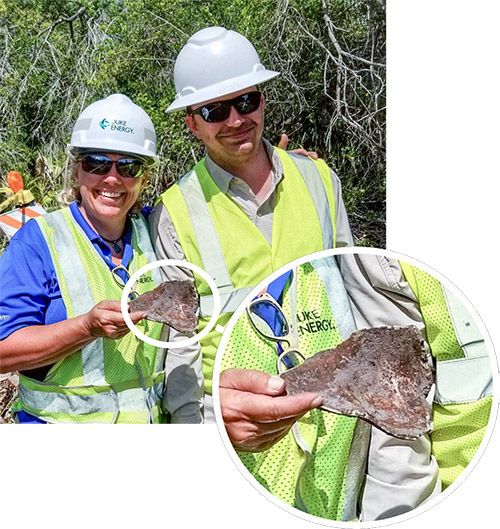 The preserve spans about 3,200 acres of shoreline along Tampa Bay and is a popular destination for birding, hiking, fishing and canoeing. It’s listed on the National Register of Historic Places, so an archaeologist works with the Duke Energy remediation team to preserve any artifacts they find.

Over the years, archaeologists have discovered tools, pottery and human remains on the island, indicating humans lived there more than 4,000 years ago. The Weedon Island natives hunted, fished and developed a ritual-filled society along the rich banks of the bay. They eventually died out, through war with European settlers and diseases such as smallpox and yellow fever, according to “The Weedon Island Story,” a history published by Pinellas County.

Brad Lanning, an archaeologist with SEARCH Inc., which partnered with Duke Energy, said the team discovered an ancient trash pile (“midden”) filled with shells. They also found dozens of shells that had been cultivated into hammers and other tools. French’s discovery was a favorite: Their research showed the cup may have been used during the Black Drink ceremony.

Black drink was a highly caffeinated tea of sorts, and drunk in large quantities could induce vomiting and cause hallucinations. “Its purpose was to get in touch with the spirit world by seeing things you wouldn’t see in a normal state,” Lanning said.

The remediation project to remove contaminated soil began in 2015 and is in its final stages. Team members said finding the artifacts deepened their connection to the island, and made them want to learn more. They discovered Weedon Island housed a speakeasy during Prohibition in the 1920s (which inspired a few bootlegger shootouts) and a short-lived movie studio in the 1930s.

“It’s a very surreal experience to hold something that another person held over a thousand years ago,” said Wyatt Grant, a senior environmental specialist for Duke Energy in Florida. “This island has quite a bit of history.”

And every little bit collected helps, said Bob Austin, an archaeologist who serves on the board of the Alliance for Weedon Island Archeological Research and Education.

“The archaeological work conducted at the remediation site has produced useful information regarding the island’s early native inhabitants,” Austin said. “Although small in scope, projects like this are essential for preserving archaeological resources and the stories they contain.”

French said it struck her how smart and resourceful the early natives were to make tools out of shells, “And how we take for granted all the tools we have now.”

“It gives me a great sense of pride,” she said, “knowing that I work for a company like Duke Energy, that takes the time to have an archaeologist present while we remediate sites like this, to ensure these artifacts are given to museums and preserved for future generations to see what life was like thousands of years ago.”

Finding the cup, after hours of sifting through soil, reminded her of the many times she and her brother, Wally, spent searching through the woods near their rural South Carolina home as children.

“But we never found anything this cool,” she said. “I sent him pictures immediately and he was as excited as I was.”