For Debra Smith, it was love at first sight.

In the summer of 2000, She and her husband, George, waited – balloons in hand – to welcome a group of South African children who would spend the next two months with American families in Charlotte, N.C. 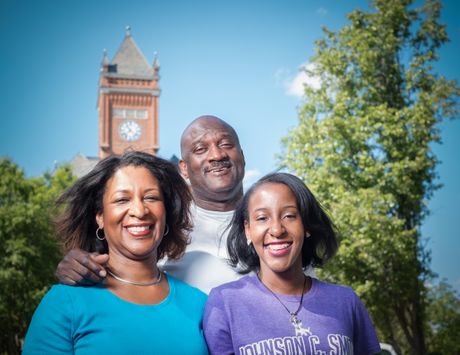 The Smiths, both Duke Energy employees, didn’t know which child they would take home that day, but as soon as 6-year-old Nicole Maswanganye (pronounced ma-swah-gah-nee) stepped off the bus, Debra silently hoped it would be her.

“When it’s summer here, it’s winter for South Africans, so Nicole had on a coat and sweats,” Debra said. “I saw her standing toward the back, and I was like, ‘Oh my gosh – I want that little girl!’”

As fate would have it, Nicole was paired with the Smiths. That was nearly 16 years ago, and Nicole, now 22 years old, is still part of the family, living with the Smiths and attending college in Charlotte.

“When she walked up to me – remember, I don’t have any children – she said, ‘Hi,’ and then she called me Mom,” Debra said. “I literally went weak in the knees. That was the most powerful thing. I’ve since told her, ‘You had my heart then.’”

A match made through ministry

A church program brought the Smiths and their “daughter” together. Debra estimates 200 children have come to the United States through their Charlotte church, Friendship Missionary Baptist, and International Children’s Outreach Ministry, the organization that runs the program. The ministry provides children a host family and opportunity to attend school for six to eight weeks before going back home. The church brings students back twice to attend summer school in the United States.

But, the Smiths brought Nicole back every summer to take classes and private tutoring lessons, and they paid for her to attend school in South Africa. In addition to the $200 annual tuition, they sent money for books, uniforms, and even transportation to school. For her junior year in high school, Nicole came to America on a visa to attend Charlotte-Mecklenburg Schools full time.

Shortly after graduating from high school, Nicole’s mother had a stroke in South Africa. She was unable to walk or talk, and Debra knew Nicole had to go back even if it put her college education on hold. 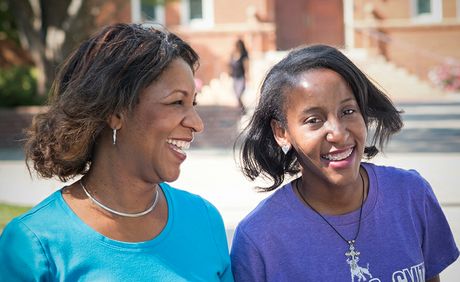 “I told my husband, ‘Nicole would be medicine for her,’” Debra said. “We wanted to make sure her mother knew we weren’t trying to take her daughter.”

Nicole went back and cared for her mother for about a year. She slept with her, talked with her and willed her back to health. When the Smiths went to visit the family in South Africa toward the end of Nicole’s stay, Nicole’s mother pulled Debra aside and said, “Would you please get Nicole back so she can get her education?”

‘I want Nicole to have a better life than I had’

Two months later, Nicole was back in North Carolina. She’s now a junior on the President’s List at Johnson C. Smith University, majoring in biology, with a minor in chemistry. She even tutors other students.

“Her mother has never been jealous,” Debra said. “She said, ‘I want Nicole to have a better life than I had.’ She always says thank you, and I always thank her for sharing Nicole with us.”

This summer, Nicole will intern at Duke Energy and take a few weeks to visit her South African family. Debra said Nicole would like to pursue a master’s degree in biomedical engineering and start a career here in the medical field to help support her family in South Africa, where there are fewer opportunities for women.

“She’s the sunshine of our lives. Even though I didn’t birth her, she’s part of our family,” Debra said.