Born to former slaves just 10 years after the Civil War ended, Mary McLeod Bethune’s improbable life took her from the humblest roots to the White House, where she served as an advisor to President Franklin Roosevelt and trusted friend to Eleanor Roosevelt.

The Mayesville, S.C., native – born on a cotton farm – knew education was essential in lifting African-Americans out of poverty. “The drums of Africa still beat in my heart,” she wrote. “They will not let me rest while there is a single Negro boy or girl without a chance to prove his worth.” 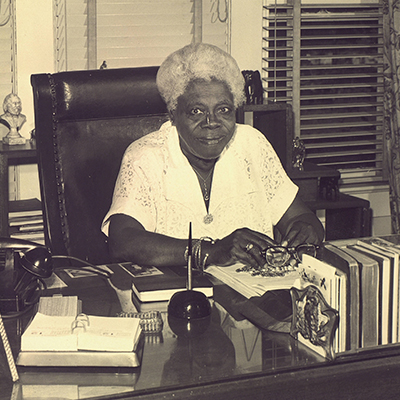 “She wanted to be a missionary,” said Ashley Jordan, former curator at the National Underground Railroad Freedom Center in Cincinnati. “But she was denied that opportunity because of the color of her skin.” When no church would sponsor her as a missionary, Bethune’s second-choice career – teaching – became her life’s work.

She believed vocational training was the right path for blacks and focused on “education that reached the hand, heart and mind,” Jordan said. In 1904, she started the Daytona Literary and Industrial Training School for Negro Girls in Daytona Beach, Fla., which through a merger with an all-male school became the co-ed Bethune-Cookman University.

Suffrage was one of Bethune’s key causes. After the passage of the 19th Amendment, she biked door to door to raise money to pay the poll tax white lawmakers imposed to suppress the black vote. When the Ku Klux Klan threatened to burn her school, Bethune led an all-night vigil. The Klan backed down, and Bethune led 100 African-Americans on a march to the polls to vote for the first time in the Daytona mayoral election.

Her polite defiance led her to national prominence. In 1936, Bethune became the highest-ranking African-American woman in government when FDR named her director of Negro Affairs of the National Youth Administration. She was also a leader of FDR’s unofficial “black cabinet.”

Bethune founded the National Council for Negro Women in 1935. In 1940, she became vice president of the NAACP, a position she held for the rest of her life.

An effective fundraiser, she courted James Gamble of Procter & Gamble to join the Bethune-Cookman board, and she convinced John D. Rockefeller and the wealthy owner of White Sewing Machines, Thomas Howard White, to become major donors.

“She wasn’t just one of the most powerful African-American women of the 20th century,” said David Taylor, president of the Harvey B. Gantt Center for African-American Arts + Culture in Charlotte. “She was one of the century’s most influential women. Period.”

Bethune died at age 79 and is buried on the campus of Bethune-Cookman University.