On a beautiful spring morning, 18 firefighters and emergency workers swaggered down the boat ramp below the Bridgewater Hydroelectric Station in Burke County, N.C., and began training for their next disaster.

A warning siren blared. The generating units started up and the gates from the powerhouse opened. Within minutes, the Catawba River transformed from a lazy meander into a raging torrent of frothy water pouring past at about 2,800 cubic feet per second.

“The Tar River looked like that after Hurricane Matthew,” said Rick Sweitz of Greenville (N.C.) Fire and Rescue as he watched the Catawba fly by. “Even a few parts of the city looked like that. That’s why we’re here. We had never done swift-water training.”

The need for specialized training became apparent after Hurricane Matthew dumped up to 19 inches of rain across Eastern North Carolina in 2016, turning quiet streams into raging rivers. Twenty-five people died and nearly 2,000 had to be rescued by boat.

“That was very eye-opening,” said Chris Bailey, search and rescue coordinator for North Carolina Emergency Management, who organized the training at Bridgewater. “A lot of local agencies realized that swift-water training is something they needed to have.” 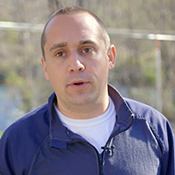 Duke Energy partners with the agency to host swift-water rescue training at various hydro facilities that Duke owns and operates.

North Carolina has more than 31 swift-water rescue teams that meet national standards and are called out in disasters around the country. Bailey said there’s a need for more. The training at Bridgewater was part of a weeklong instruction that also included a day at the U.S. National Whitewater Center in Charlotte.

Lynne Dunn, Duke Energy lead engineering technologist for hydro operations and compliance, said the company considers the water releases from hydro stations a public service. A lot of factors are taken into consideration. “Do we have enough water in the reservoir to make the release? Can we spare it? You wouldn’t do this during drought conditions or periods of low rainfall.”

But in spring, with Lake James full and rain on the way, she said Duke Energy was happy to help.

Before the warning siren sounded, Luke Easter, a firefighter from Greensboro who was helping teach the course, walked across the Catawba River to set up an obstacle course for the trainees. While he was still out there, water started flowing. Getting back across the river became more complicated – and a learning moment for the men watching from the shore.

Easter leapt into the current, which quickly swept him downriver. He knew not to try to fight the flow of the river, angling instead toward shore to a line that a colleague tossed out.

“A lot of people don’t realize operating in moving water is totally different than operating in a still-water environment,” Bailey said. “We want to give them enough knowledge where they can see if you push too far you can hurt yourself.”

Before the men launched their rescue boats into the swollen river, Easter gave a short prayer, asking for safety.

Capt. Jerry Rogers of the Charlotte Fire Department then called out: “Let’s load up!”

The men divided into six boats, three to a team with one instructor. They wore life jackets, helmets and dry suits to keep from getting wet in the icy-cold water. Instructors taught them how to ferry back and cross the river without being swept downstream. They taught them how to make sharp 180-degree “J-turns” in tight spaces, as well as how to read the water to recognize obstructions lurking below.

When they broke for lunch, the men seemed energized by the experience.

“This is teaching us to respect the movement of the water,” said Matthew Ross, a firefighter from Charlotte.

“And the power of the water,” said Cory Parks, also a Charlotte firefighter.

“It’s all about precision,” added Josh Asbill of the South Orange Rescue Squad in Carrboro, N.C. “This has really been helpful, getting points from people who’ve done this before. It’s made us more comfortable with our equipment and how our boat handles in water.”

When the next disaster strikes, they’ll be ready.