Since 2013, Duke Energy and other utilities have recognized lineworkers on April 18 for their hard work and dedication to customers. This year, while we recognize health care workers and other essential workers – we’re proud to recognize the ones on our team, too, for their efforts to keep people safe and our country running during the pandemic.

On April 18 at 9 p.m., join us in Front Lights 4 Front-Line Workers by turning on an outdoor light to thank all front-line workers.

The coronavirus has changed almost everything in 2020, including how Duke Energy restores power after a storm.

Over Easter weekend, Duke Energy’s logistics team had to devise a plan to station crews in a way that would keep them safe from the coronavirus while restoring power to 600,000 customers as quickly and safely as possible.

High winds, rain, and tornadoes blew through the South, causing mudslides and extensive damage to the grid. While customers across the Carolinas lost power, those in western North Carolina and the upstate of South Carolina were hit hardest.

Despite the challenges of a pandemic, crews restored more than 95 percent in less than 48 hours.

Lineworkers, tree crews and damage assessors followed social distancing guidelines and wore face masks as they worked around the clock through Thursday to restore the remaining outages that required more detailed repairs. These workers are the first to respond after a power outage and having them ready to go means a faster restoration. 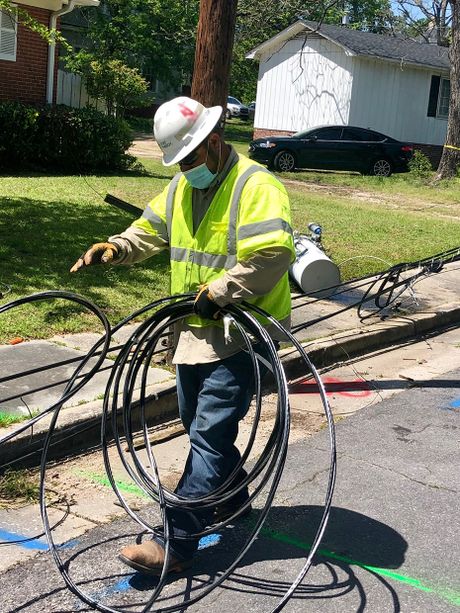 A lineworker in Lancaster, S.C., makes repairs following the storm.

Behind the scenes, there are hundreds of people orchestrating this effort.

Erin Strickler manages the Carolinas logistics team for Duke Energy and has led her team through three years of above-average hurricane activity, ice storms and thunderstorms. These storms usually require hundreds or thousands of crews to travel from around the country. To feed, house and train them, Strickler’s team builds pop-up base camps within a day’s notice at fairgrounds and civic centers. Thousands of trucks park in assigned spots, receive their assignments, and roll out to work.

The April 12 storm required more than 900 additional lineworkers, but housing them in base camps wasn’t an option. They would be too close to each other. So, Strickler’s team found another way. From her home office in Raleigh, N.C., she instant messaged, texted and called her team so often that she couldn’t keep her phone’s ear piece charged as they found crews who could help and hotels in Greenville, S.C., to accommodate them. 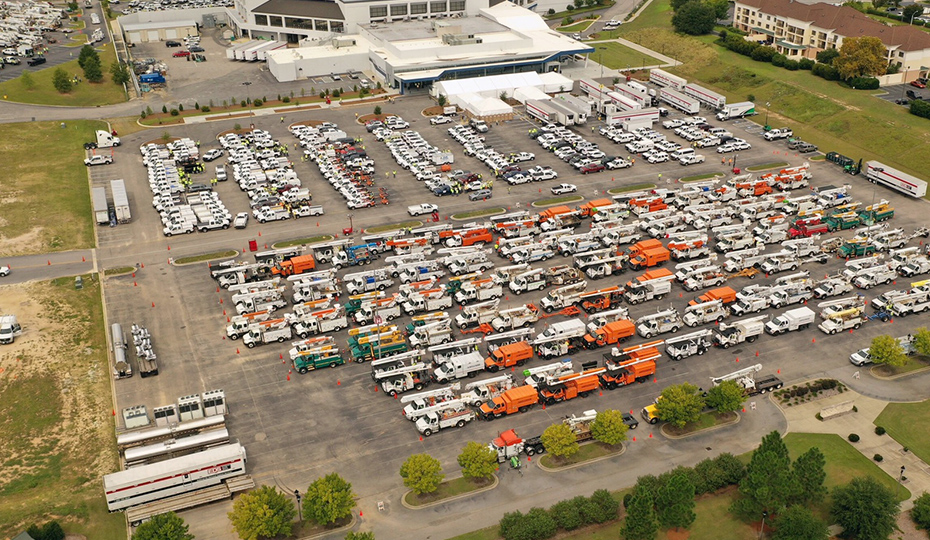 Crews parked at the Florence Civic Center, which was a base camp during Hurricane Dorian response in 2019.

About 600 lineworkers came from Duke Energy in Florida and the Midwest, where crews had just wrapped restoration after an April 8 storm knocked out power to more than 300,000. They slept one to a room in South Carolina instead of two per room like they normally would. Strickler said they worked with the hotels to keep the crews in one floor or section of the hotel with their own elevator or stairwell to limit their interaction with other hotel guests.

Strickler’s team called the crews to assign hotels and room numbers so that they could leave directly from their homes or operations center. For food, instead of a base camp’s dining tent, the logistics team had runners deliver meals from restaurants to the hotels. Crew leaders gave them work assignments by phone, too.

Lineworkers, damage assessors and tree crews traveled one to a vehicle. Crews who came from contract companies were onboarded by video in small groups rather than the regular mass gathering at the base camp. 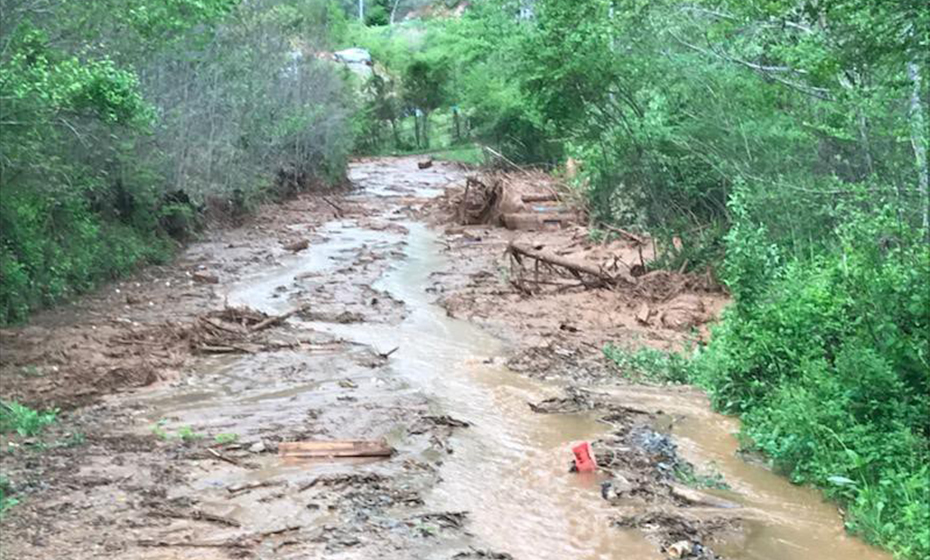 Damage from the April 12 storm in Franklin, N.C., one of the hardest hit areas.

Duke Energy Storm Director Jason Hollifield said there was nothing routine about the response as he thanked customers for their patience. Despite the challenges, he said, crews worked safely in the field with the support of an army of teammates working remotely from customer service, communications, logistics, safety and more.

“It was designed to keep people as far apart as possible, and I think it went as well as I could have hoped,” Strickler said. “The pandemic caused us to think differently, so there have to be lessons learned that will come out of this so we can improve going forward.”

Strickler attributes the smooth response to coordination between her team and the other groups that make power restoration possible. As she works from home with her 10-year-old son, she said she understands the importance of electricity now more than ever and is proud to be part of a team who can help turn the lights back on after a storm.