Ken Manuel, Jim Painter and Paul Viggiano had a simple plan. Invite several dozen Boy Scouts to McGuire Nuclear Station to earn three science merit badges. But what they could not have anticipated in 1985 was that 30 years later, their idea would leave a lasting impression on thousands of boys.

These fathers wanted their sons to have an experience that would leave them with a positive attitude toward science.

“As a parent, and also as a scientist, I quickly understood that we needed to expose our children to more science and technology,” said Manuel, who still works at the Environmental Center at McGuire. “And what better way to do that than to get them involved with the people I work with?” 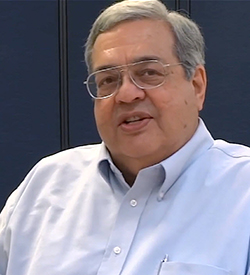 The Duke Energy teammates envisioned a way for employees to partner with the Boy Scouts of America on their merit badge program. At the time, many people didn’t associate scouting with topics like nuclear energy and electricity. Nevertheless, Manuel approached the staff at the EnergyExplorium, McGuire’s education center, with the idea of hosting a science merit badge learning experience.

Plans for the encampment quickly evolved, and what was once, in Manuel’s words, “a small vision,” became a reality in 1986 when McGuire welcomed 50 Scouts. In the 30 years since, more than 10,000 Scouts have participated in the merit badge program at McGuire and other Duke Energy nuclear plants.

There are several ways scouts can earn a merit badge but an encampment offers a unique experience.

“It is not intended to be an easy way to earn a merit badge,” said Johnny Norton, a Scout leader, leadership trainer and merit badge counselor. For Norton, an encampment offers a chance for the boys to immerse themselves in scouting culture. “The camp-out experience takes on many meanings – learning new skills, camaraderie and simply being part of something bigger.”

The encampment has had a profound impact on many of its attendees.

A few years into the program, Manuel received a letter from a scout master regarding a young scout who had earned his atomic energy (now nuclear energy) merit badge at the encampment. Shortly after attending the encampment, the scout’s father was diagnosed with cancer. The boy had learned enough about atomic energy and radiation through the merit badge program that he could understand the oncologist’s explanation of his father’s treatment and describe what was going on to his mother.

“The Scout master made it very clear in his letter that it was an incredible, positive experience for the scout to come to McGuire and learn that kind of information,” Manuel said. “And it made that journey in his life a little bit easier, a little bit better.” 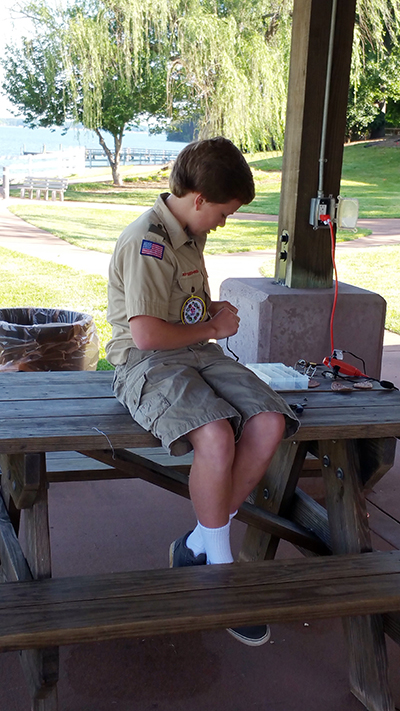 Matt Bandieramonte, who attended the encampment for the first time in the late 1990s, recalls earning his first merit badge, a metalwork badge: “The instructors took us down to a workshop, gave us a tour and showed us some of the cool stuff they make at the facility.”

Bandieramonte, along with fellow Huntersville, N.C., firefighter Henry Cook was recruited by a mutual friend, who works at McGuire, to return as merit badge instructors. They saw the opportunity to share their skills as a way to honor the instructors who taught them.

“I definitely see in the classroom the way we behaved when we were kids, so now I get to see the adult side of it,” Cook said. “It’s neat to be able to teach them life lessons I’ve learned.”

Since starting in 1986, the Boy Scout merit badge program has seen tremendous growth.

“It’s really exciting to know that McGuire Nuclear Station has continued that tradition now for 30 years,” said Manuel. “There are still people here who can share their science knowledge with young people.”