Bob Willis would drive up to a construction site in his International Scout with his Cocker Spaniel Charlie by his side and an old Hasselblad camera at the ready.

Then he did whatever it took to get the perfect picture for Duke Energy – whether that meant scaling a water tank, riding in a bucket or crawling through a muddy tunnel. Once he even hung outside an airplane. 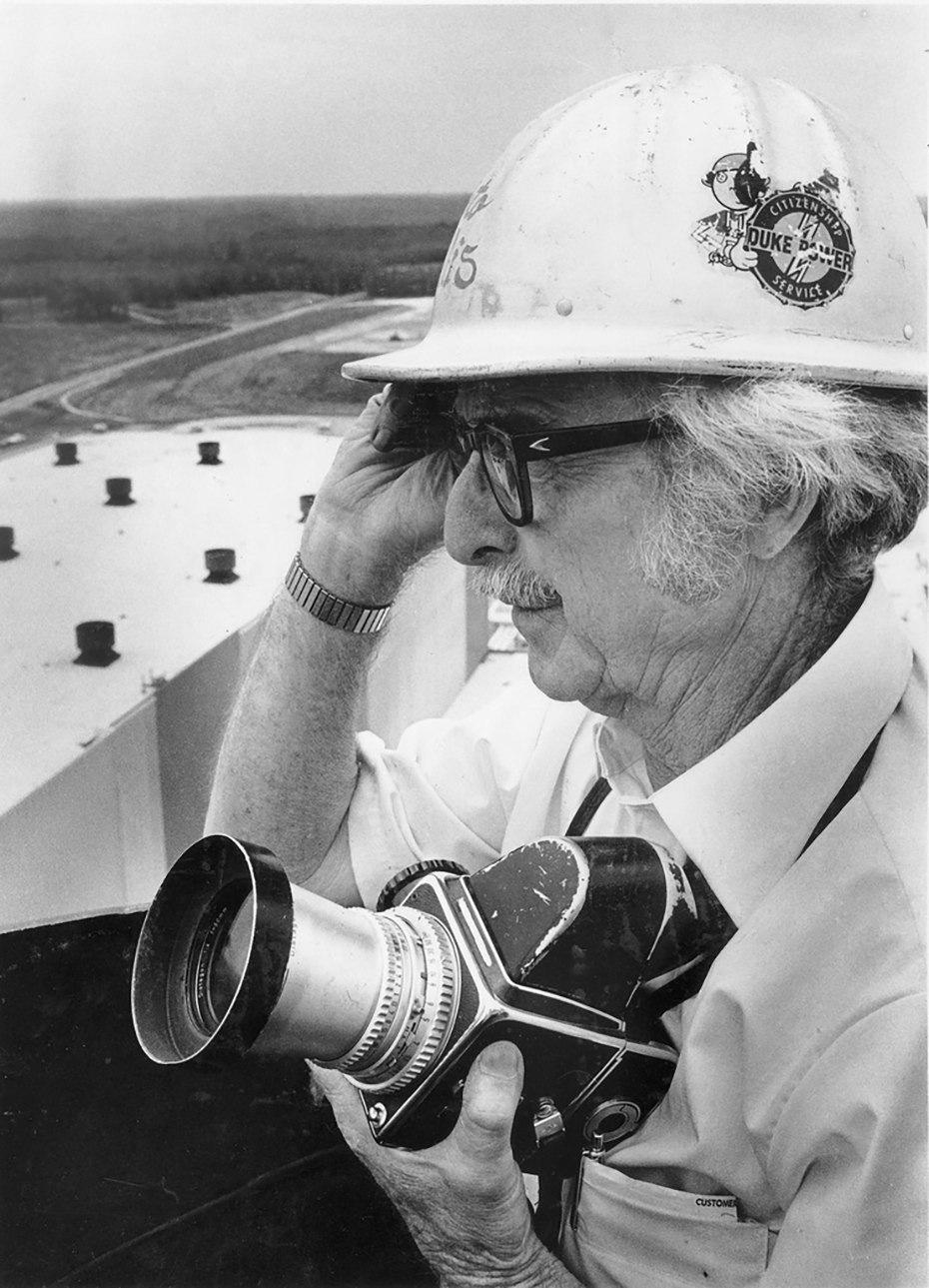 By all accounts, “Photo” Willis was fearless.

For more than 40 years, he worked as a consultant photographer for Duke Energy, documenting construction and maintenance projects. Hundreds of thousands of his photos are now protected in acid-free sleeves in company archives. But those photographs are more than a curiosity from the past. They are invaluable tools for 21st century power generation.

“Engineers in our facilities still use them today,” said archivist Akeem Flavors. “I work with the photos on a weekly, almost daily basis.”

The photographs Willis took provide a record of the company’s station-building history that engineers still find to be valuable, Flavors said. When maintenance is required, workers can turn to the photographs to see how plants were constructed.

In addition to being invaluable, said Flavors, who earned an undergraduate college degree in photography, the photographs are also nice to look at. “I think he had a really great eye,” Flavors said. “For something that sounds sort of boring, like the construction of a plant, he made it very beautiful.”

Willis grew up around photography. In 1914, his father opened Willis Studio in Spartanburg, S.C., where a collection of his pictures are stored at Spartanburg County Headquarters Library. Bob Willis eventually took over the business and became known around town for his photos at high schools and colleges. 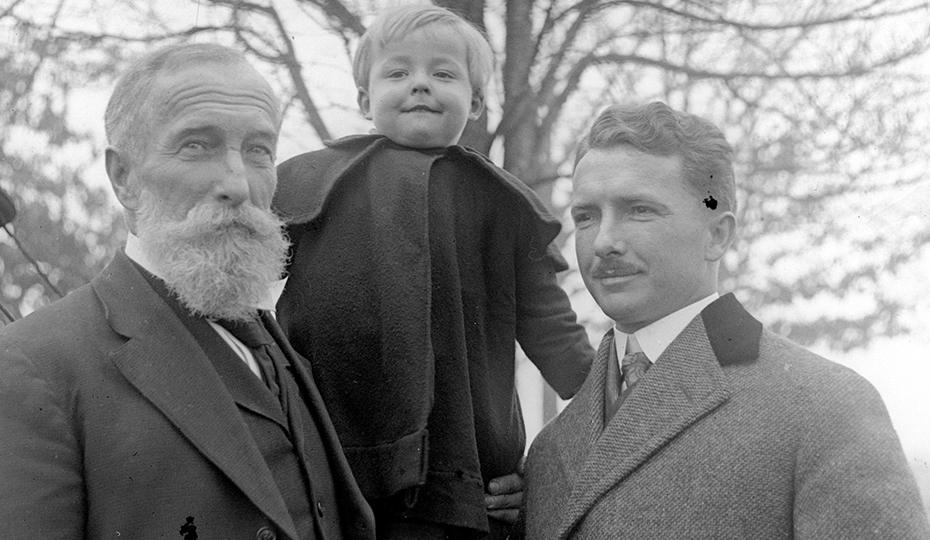 He began taking photographs for Duke Energy in 1949 and quickly distinguished himself. (His daredevil attitude would not be acceptable in today’s safety culture.)

“As the only single person to witness and document the modern era of Duke construction, he has earned a place as a legend in our company’s history,” Jeremy Dreier wrote in a 1991 story for Duke Power News. In that article, Dreier recounts an anecdote passed along by Bob Lynn, who at the time was manager-materials and equipment at Bad Creek Hydroelectric Station near Salem, S.C.

“We were up about 3,000 feet (in an airplane),” Lynn recalled. “All of a sudden, Mr. Willis said, ‘Grab my belt.’ The next thing I knew he was hanging out the door, shooting straight down. It scared me to death.”

Skip Steele, who retired in 2019 as general manager-projects, remembers Willis as “surprisingly spry, a little cantankerous and absolutely without fear. He would climb, crawl and walk all over our large sites looking for every change since he had been there last.”

Jim Boughman, now a program manager in the corporate office, got to know Willis during construction of Catawba Nuclear Station and later of Bad Creek Hydroelectric Station in the 1980s. Boughman appreciated that Willis took time out of his day to share tips about photography. 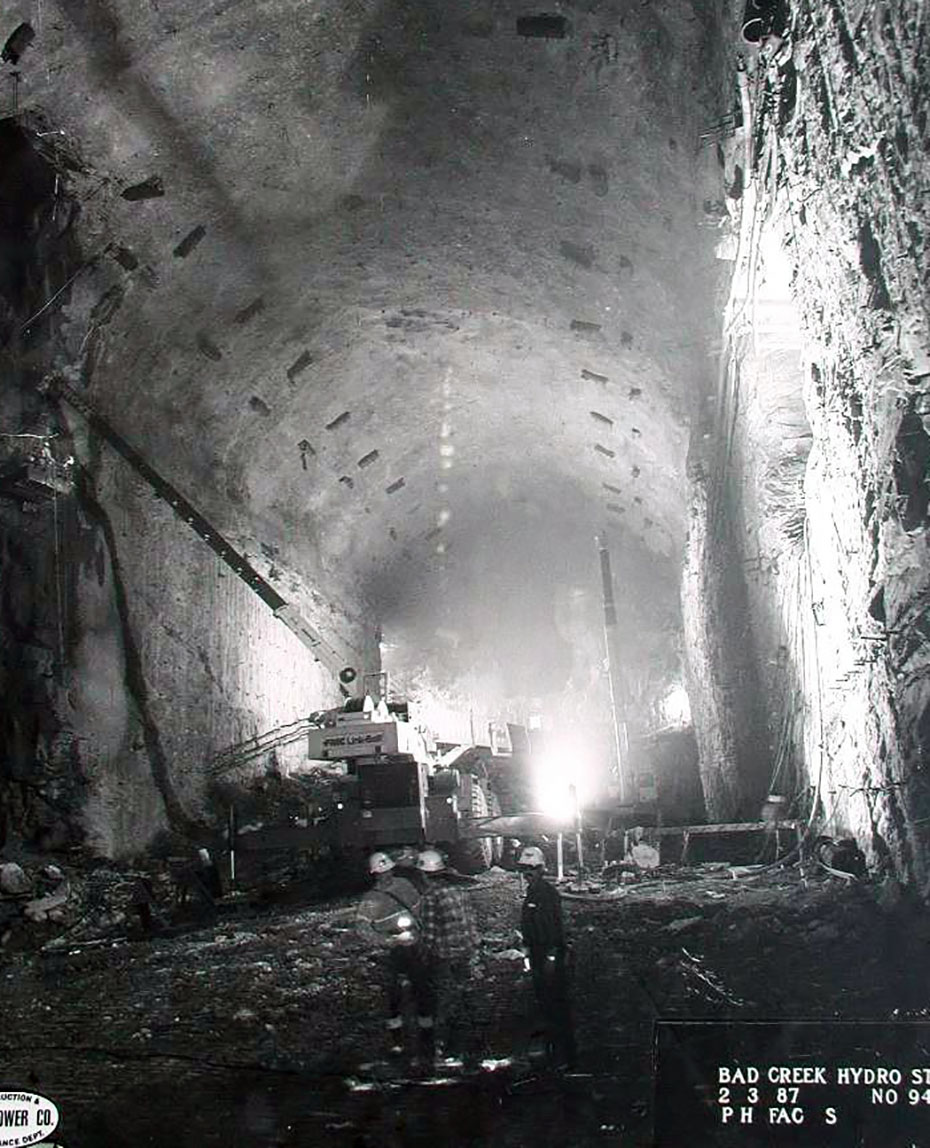 Bob Willis shot this photo at Bad Creek Hydroelectric Station in South Carolina. Jim Boughman said: "I am the one with the light around my neck. I worked in Geotechnical Engineering at the time the photo was taken (1987)."

Boughman shared this story that made the rounds, although he can’t attest to its authenticity. The way the story goes, security officers at one of the plants told Willis he couldn’t bring his dog.

“Mr. Willis politely said, ‘OK,’ and asked to use the telephone,” Boughman said. “After a brief conversation on the phone, Mr. Willis handed the phone to security.”

To their surprise, Bill Lee, the company CEO, was on the other end.

“Mr. Lee kindly instructed security to allow Mr. Willis and his dog to come on-site,” Boughman said. “I can personally attest that Mr. Willis and his Cocker Spaniel were on-site during construction of Catawba Nuclear Station and Bad Creek Hydroelectric Station.”

Willis hoped to continue working for Duke Energy until he was 80. But he died in 1993 at age 78. His legacy, however, lives on in his photos. 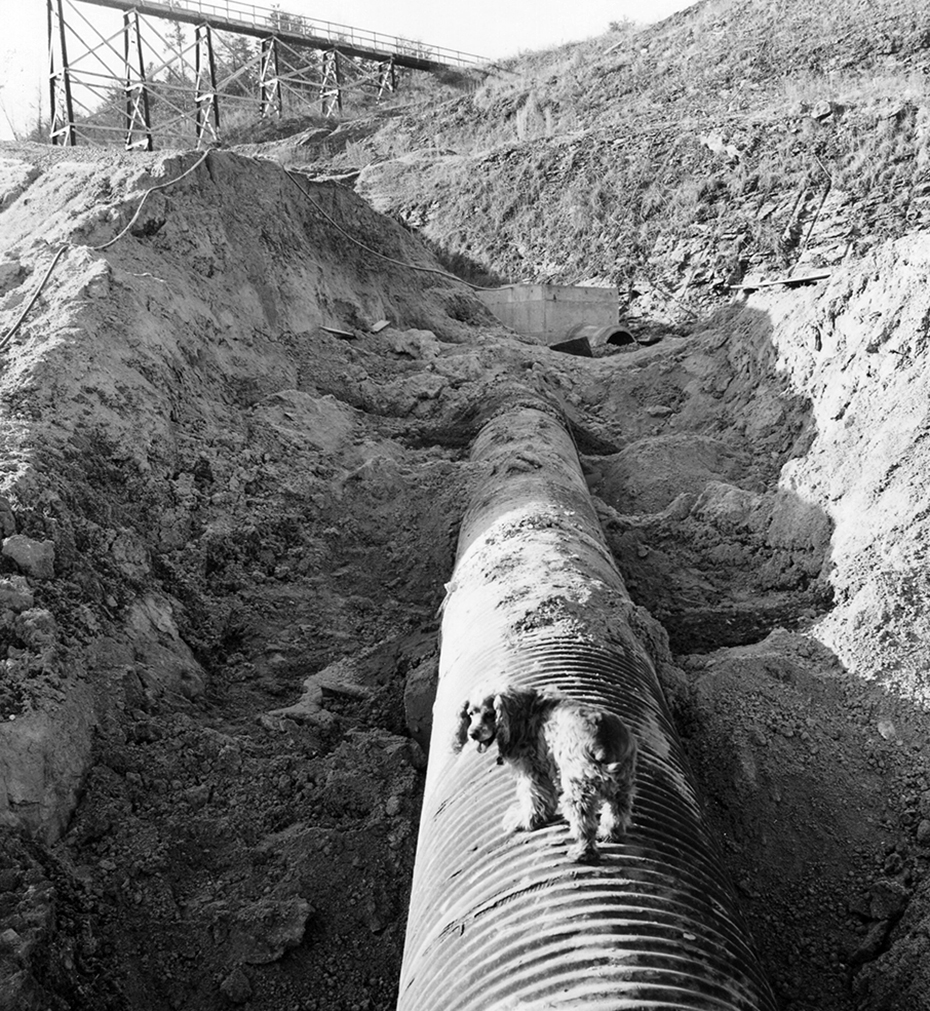 A 1977 photo of Charlie at Cliffside Steam Station Mooresboro, N.C. 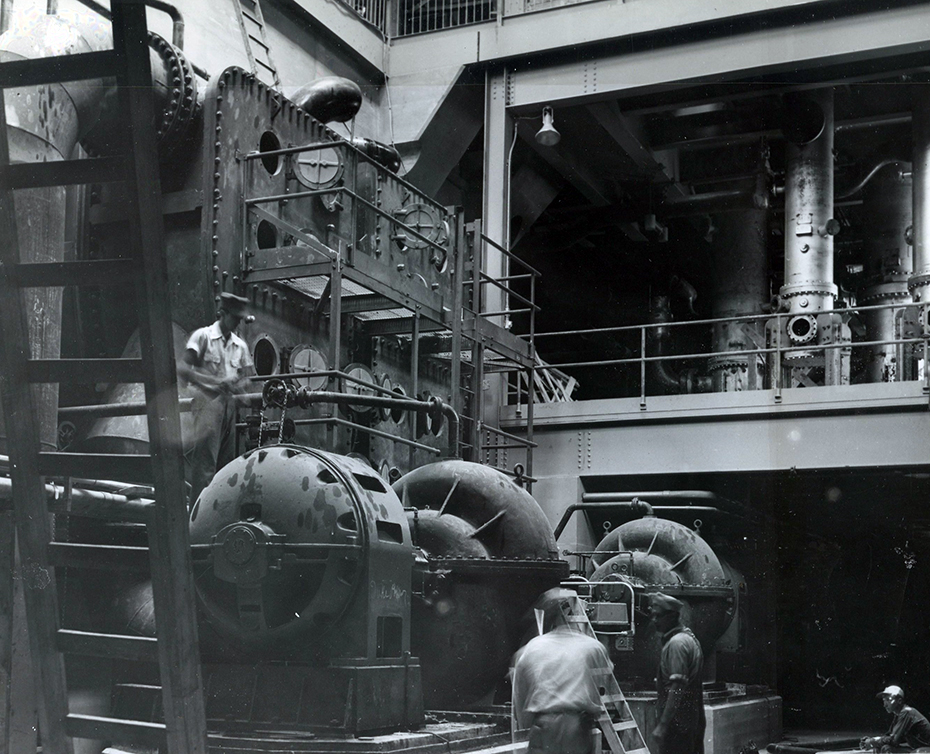 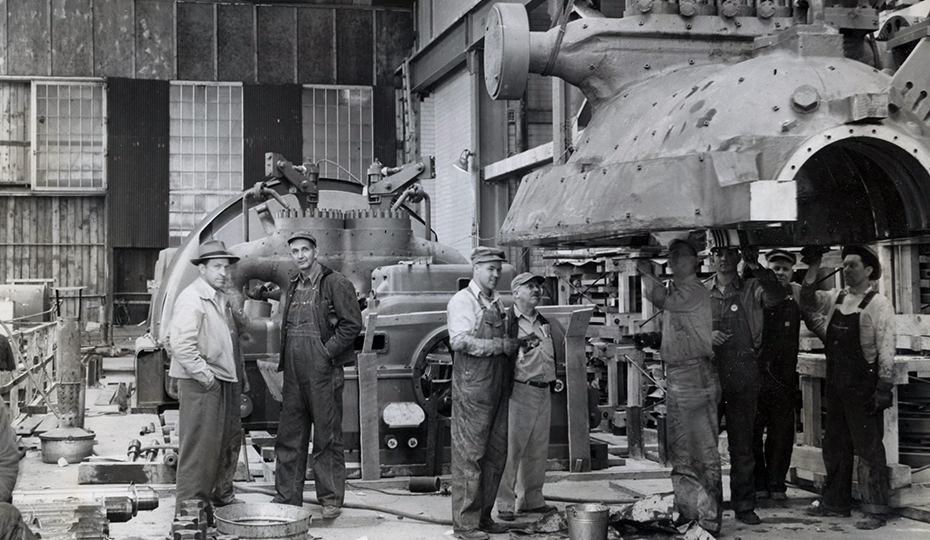 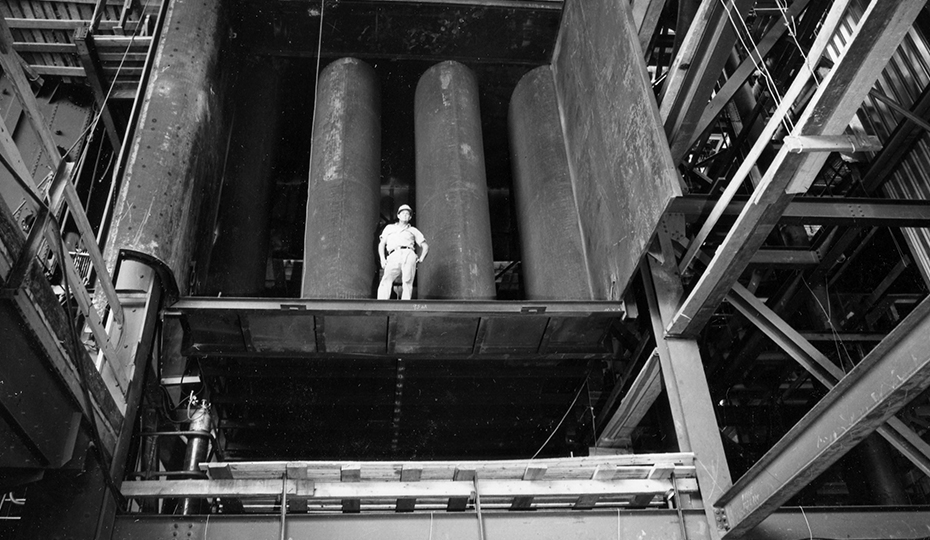 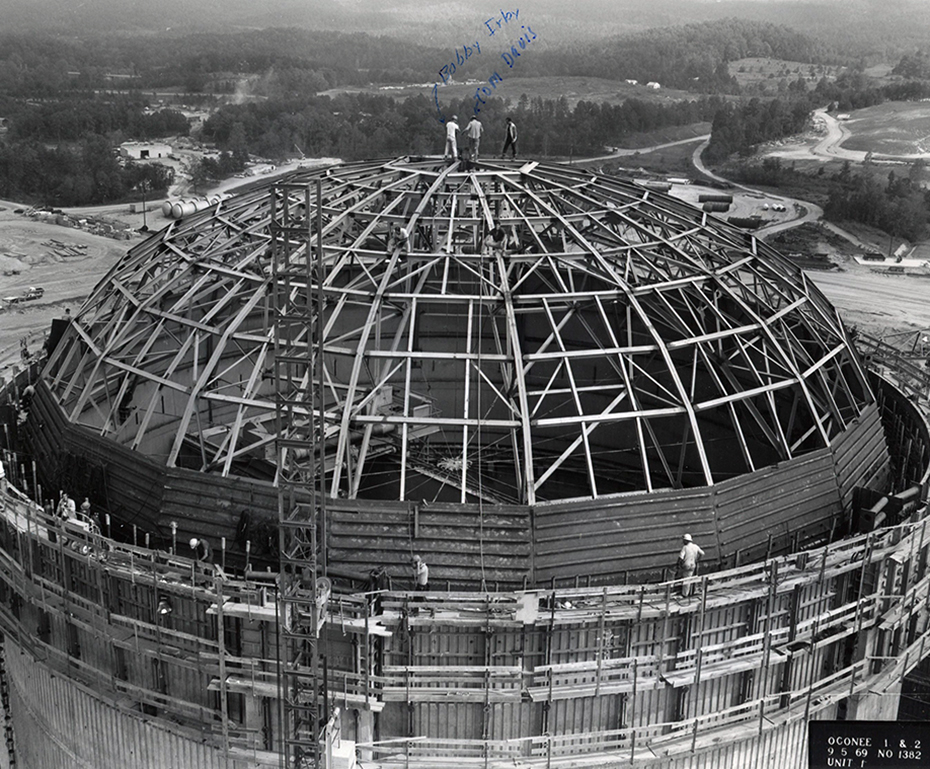 Oconee Nuclear Station in South Carolina under construction on Sept. 5, 1969.