Co-workers dedicated this year’s Festival of Trees at Oconee Nuclear Station in Seneca, S.C., to BJ Gatten, who died from a sudden illness in December 2015.

Amid a room full of twinkling lights and red and green ribbons, Christmas carols in the air, Becky Burrell stares at something only she can see, conjuring memories. She waits for several moments and shifts back and forth, back and forth. Takes a deep breath. Exhales. Only then does she speak.

It isn’t easy, but words come.

“She reminded me of Audrey Hepburn, who is my favorite actress in the world. And when BJ walked in the front door for the first time, that’s who came to mind. She was so confident. Just pleasant. She just exuded confidence. BJ was the total package.”

She tells stories to illustrate each one, and in these words a portrait starts to emerge. Even now, nearly a year after Barbara Jean Gatten’s death, the picture is bright and vivid, that of a woman possessing uncommon grace. This year’s Festival of Trees at World of Energy educational center at Oconee Nuclear Station in Seneca, S.C., is dedicated to Gatten, who had worked there as communications manager for Duke Energy’s nuclear generation fleet in South Carolina.

Burrell painted two scenes: of that first walk in the door.

"She went overboard at Christmas"

Her life was overcome by sudden illness, and when it was over, what remained is a large empty space containing memories of BJ.

They live in the Piedmont of North Carolina, where BJ was born and where her parents and a brother and sister remain. They drift in the afternoon rains of central Florida; another sister lives there. They roam the hallways of buildings in Tennessee, where for years she worked at the Tennessee Valley Authority and studied at the University of Tennessee. In Upstate South Carolina the memories are perhaps deepest, and the void is deeper still, felt by a loving and devoted husband, David, and their two children, Lauren and Luke.

As communications manager, Gatten operated the World of Energy education center. It’s now the height of the holiday season, and the World of Energy is hosting its annual Festival of Trees. Christmas was her favorite time of the year, and the event—now in its fourth year—began under her watch.

“She went overboard at Christmas, but in a good way,” said Burrell, who worked with Gatten at the World of Energy longer than anyone else. “She loved Christmas and she loved cooking. Any function here, whether it was Christmas or anything else, she would bake casseroles and pies and cookies and bring it in. She loved the holidays.”

That’s why, this holiday season, Chris Rimel, the new communications manager for Duke Energy’s nuclear generation fleet in South Carolina, decided to honor Gatten’s life during the Festival of Trees.

“I’ve learned how BJ believed the World of Energy is an important cultural part of this world. Her spirit lives here,” he said.

New items at the World of Energy include two red benches—red was her favorite color—with Gatten’s name on a plaque. A sign in the lobby points to a large central tree decorated with a theme of peace by white doves on its branches. Doves had a special meaning for Gatten.

Rimel led visitors to the festival’s tree lighting ceremony on Dec. 1 in a moment of silence.

“It was an emotional time,” Rimel said. “But it’s our small way to remember how precious BJ’s memory is to the team.”

Amanda Dow has her memories, too. Two years’ worth. And when she thinks of BJ Gatten, it’s Christmas and the World of Energy Festival of Trees that comes to mind.

The festival was Dow's brainchild. Each year, at the end of November, the staff assembles nearly two dozen holiday trees in its lobby, inviting organizations in the area to decorate them. Throughout December, neighbors vote on their favorite. The top vote-getter receives a $1,000 donation from Duke Energy for their favorite charitable organization. 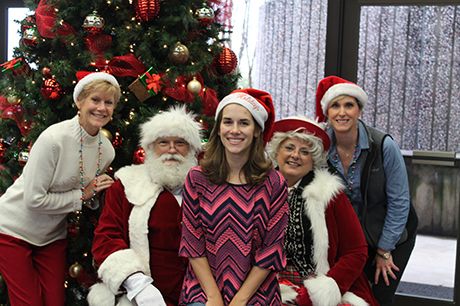 “I remember how excited she would get once all the trees at the World of Energy were complete and she would comment on how she enjoyed coming to work this time of year because it was so festive,” Dow said.

More than that, the Festival of Trees served a greater function, she said.

“BJ had a very giving heart and delighted in finding ways she could personally and professionally give back, especially during the holiday season,” Dow said. “She incorporated a toy drive with Toys for Tots as part of the Festival of Trees because she couldn’t stand the thought of a child not having a toy at Christmas time.”

Her giving nature extended beyond the community. Mikayla Kreuzberger, who worked with Gatten at the World of Energy, said she hosted a holiday party each year for the education center’s staff. “She just really loved Christmas, everything about it,” Kreuzberger said.

“I’ve never had a boss bring me into her home like that,” said Linda Young, another staff member. “There was a lot I admired about her.”

One year after her death, it’s hard to talk about, Becky Burrell said. In the days leading up to that last walk out the door, Burrell felt something was wrong. Gatten hadn’t been well for a few days, which was unusual.

Undimmed by the passage of time, the loss is still painful. Yet even as Christmases come and go in their relentless drumbeat of years, Burrell said she isn’t sure the wound will ever heal. Not really.

“She gave you opportunities to grow, and always wanted you to excel in everything you did,” Burrell said. “She was a class act, someone I just admired.”