New giant cranes at North Carolina’s Port of Wilmington will do more than lift cargo. They’ll also help lift the state’s economy. The installation is part of a $200 million investment that began in 2016 with widening the Port of Wilmington’s turning basin and expanding the container berth where the cranes will be installed. 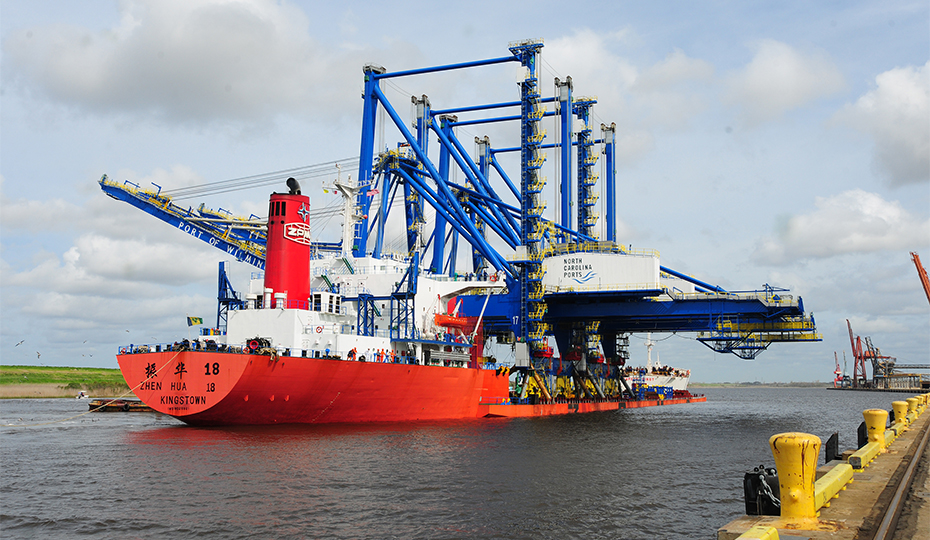 Two new cranes traveled up the Cape Fear River from China and will help large ships unload faster at the Port of Wilmington.

The two electric cranes, each weighing 1,553 tons, traveled up the Cape Fear River and arrived at the port from China on March 29. They will allow ships to unload faster, which will contribute to the state’s economy. According to a study by North Carolina State University’s Institute for Transportation Research and Education, port activities contribute $707 million per year in state and local taxes and more than 76,000 jobs statewide.

The Port of Wilmington is one of many East Coast ports upgrading infrastructure following the Panama Canal’s $5.25 billion expansion in 2016. When the Panama Canal opened in 1914, it transformed the trade industry by allowing ships to save nearly 8,000 miles on a trip from New York to San Francisco because they no longer had to sail around South America. According to History.com, the Panama Canal is part of 144 trade routes connecting 160 countries and 1,700 ports around the world.

How big are the cranes?

The new cranes at North Carolina’s Port of Wilmington made a two-month journey from Asia and required quite a bit of planning. They will be able to unload containers from the world’s largest container ships, but how big are they really?

Weight: 1,553 tons – more than eight of the biggest blue whales, the largest animal in the world.

Length: 465 feet – about the height of two giant sequoia trees.

Width: 90 feet – the distance between bases on a baseball field.

The cranes needed to accommodate these new ships are so large they couldn’t pass under Duke Energy’s 335-foot tall transmission towers in the Cape Fear River. So the North Carolina State Ports Authority worked with Duke Energy to raise the lines and the Coast Guard to halt traffic on the river.

The transmission lines are connected to Brunswick Nuclear Plant in Southport, N.C., which delivers about 1,870 megawatts of electricity to the grid. Duke Energy and the Ports Authority planned the cranes' delivery while the plant was shut down for a scheduled refueling.

Duke Energy Transmission Project Manager John Taylor said the cranes would clear the transmission lines by about 3 feet without any adjustments, but they were not comfortable with such a small margin. Duke Energy crews analyzed tide, weather and equipment temperature data to develop a plan that would increase the clearance to a minimum of 15 feet.

The day before the cranes arrived, the lines were de-energized, and crews climbed the tower to disconnect the lowest of the three lines and reattach it to a higher point until the cranes passed. 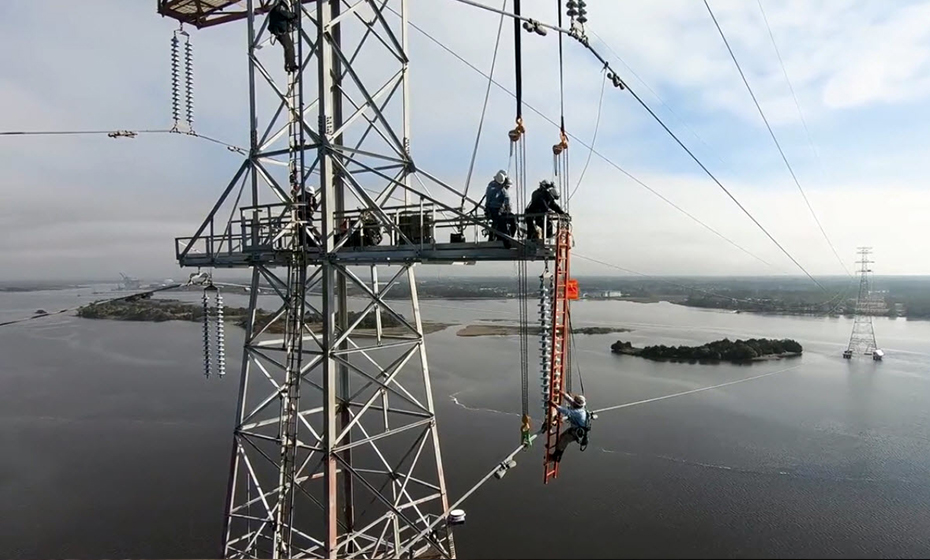 Duke Energy crews climbed the 335-foot transmission tower and raised the bottom power line to give the cranes enough clearance to pass.

These improvements are coming as the number of containers unloaded at the port is increasing – year-to-date volume is up 58 percent. According to the Ports Authority, the recent investments have led, in part, to several new trade routes using the Port of Wilmington.

“The investments are extremely important. It’s what keeps us on the map,” Blair said. “North Carolina ports are known for their efficiency, quick gate-turn times and customer service, so being able to respond to customer demand for larger, more efficient cranes and a larger, safer turning basin keeps us at the forefront of customer service.” 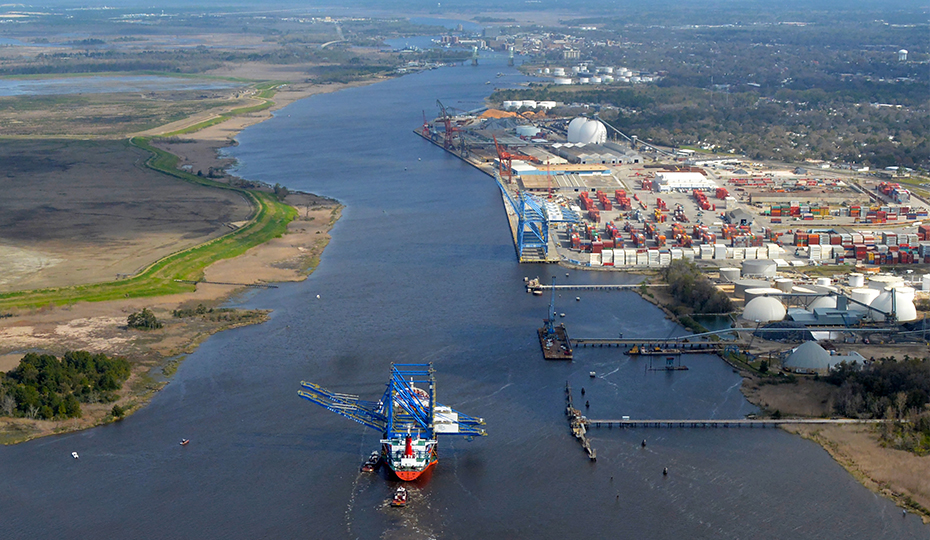 The new cranes will be located near Wilmington's current cranes, pictured here to the right. They will move containers from the ship to the newly expanded, adjacent container yard.

In addition to increased efficiency, Wilmington is a convenient choice because it’s the closest port to major points on the I-85 Corridor, including Charlotte, Greensboro and Raleigh-Durham; it has easy access to interstates 95 and 40 and daily rail service. It moves a host of products including grains, furniture, fertilizers and wood products. North Carolina’s second port – Morehead City – is smaller than Wilmington but is the second-largest rubber importer in the country. Blair said if you’ve purchased a tire from a major manufacturer in North Carolina, there’s a good chance it came through Morehead City.

“No matter the county you live in in North Carolina,” Blair said, “we can give you a snapshot of economic contribution that comes through one of our two deep-water ports. You go to the store, and you buy something, but there’s a long logistics chain that goes from manufacturing to store shelves. Folks are always surprised to find out different ways that ports impact their lives.”

Drone footage of the cranes' arrival: