If you were a kid during the early days of the Space Age, you probably dreamed of being an astronaut.

Chicago native Joan Higginbotham, who became one, never did. 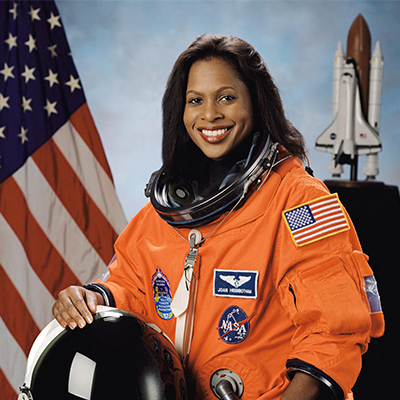 “My first career goal was to be an electrical engineer at IBM,” she said. “Instead, I became a rocket scientist at NASA.” (And became a resident of Charlotte, N.C., because of love. She moved to Charlotte in 2011 when she married City Council member James “Smuggie” Mitchell.)

When she boarded the Space Shuttle Discovery in 2006 for a 12-day mission to the International Space Station, she became the third African-American woman to go into space.

In college, Higginbotham, now 53, became part of the INROADS program, which since 1970 has helped high-potential women and people of color gain access to high tech jobs. Through INROADS, she landed an internship at IBM in Binghamton, N.Y. Her experience there led her to NASA, where she worked on the electrical systems of shuttles.

Nine years in to her NASA career, a mentor told her she had the right stuff to be an astronaut – something she’d never considered.

Higginbotham’s parents – her “heroes,” she says – expected Joan and her three older siblings to excel. “Our parents focused on education, taught us the importance of a work ethic and stressed the need for a moral compass,” she said.

The former astronaut has had several careers – and each one has been “a reinvention,” she said. She ran the malaria eradication program for Marathon Oil in Equatorial Guinea, Africa, and worked at retailer Lowe’s as head of community relations. Today, she remains in the Charlotte area as director of Corporate Social Responsibility for UTC Aerospace Systems. She’s in charge of the company’s national and international philanthropic efforts.

Reflecting on her career as an astronaut, Higginbotham said, “I am incredibly blessed to have served my country in such a unique way, and I encourage everyone to go for whatever dream they have. There’s no such thing as failing unless it’s failing to try.”