Everything happened so quickly.

William Thompson IV’s flu-like symptoms were serious enough for a trip to the emergency room that day in January. Doctor’s seemed to confirm the 12-year-old had the flu and sent him home. But the next morning he was unresponsive.

His father, Bill Thompson, wants to raise awareness about meningitis, and created the social media campaign that he hopes will culminate in a widespread showing of support at the Master’s Tournament April 3-9 near Bill’s home in Augusta, Ga. 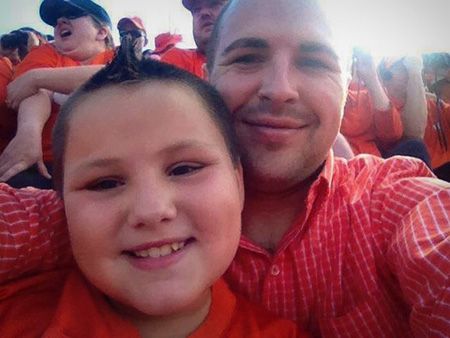 William Thompson IV and his dad.

The cornerstone of #wearwhiteforwilliam is Wednesday, April 5. William’s family is urging everyone to wear white that day. The idea? Get people curious as to why everyone is wearing white. Yes, even the thousands of people attending the Master’s.

“William was a healthy kid,” said Thompson, an operator at the Vogtle electric plant in Waynesboro, Ga. “In five days, he was gone.”

Thompson doesn’t want to waste any time. After all, William was an avid golfer who, as it turns out, shares a birthday with Master’s great Tiger Woods.

“What if I would have heard about this six months ago?” Thompson said. “There’s a better chance William would be alive. If I were aware, I would have known something was wrong. That’s why it’s so urgent our communities know about this. I am exhausting everything I have to tell the whole world.”

It’s a small price to pay to tell his son’s story.

“Everything my family is doing, every decision, is driven by saying, ‘this is urgent,’” said Thompson, who is enlisting an army of family, friends and celebrities to help spread the word. “[Bacterial meningitis] will take your loved one away from you.”

“It sounds funny, but he was just about an ideal little kid,” said William’s great uncle, Mike Bailes, an operator at Duke Energy’s Oconee Nuclear Station in Seneca, S.C., near where William grew up in Easley, S.C.

“He was happy all the time. And he loved to golf. Just loved it. He was a pleasure to be around,” Bailes said. “Everyone felt that way about him.”

Children are a gift, and Thompson arranged to have his son’s organs donated – and why he wants others to learn a lesson from William’s life.

“It takes time, resources and people,” Bill said. “More people have to be made aware. That’s the whole point of this.” 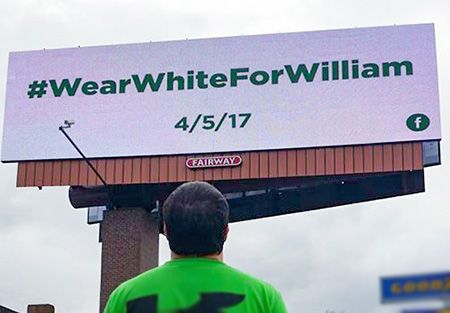 And when people ask, they’ll learn about the insidious and rapid onset of bacterial meningitis – and what they can do to ensure no one suffers the way William did.

The whirlwind surrounding Bill Thompson and his family is still going strong.

“It’s never really stopped,” Thompson said. “It gets stronger at times, magnified at times, but the memories and stories of his life are things I think about all the time. I always think about it.

“I want to start a wave that ripples across the globe,” he said. “As hard as it is, for this period of time, I would want to know that we exhausted everything we could. That’s what all of this is about.”

How you can help

Track the Wear White for William Campaign on social media using the hashtag #wearwhiteforwilliam, and show your support by wearing white on April 5 to raise awareness of bacterial meningitis.

What is bacterial meningitis?

Bacterial meningitis can be caused when bacteria from an ear or sinus infection or a skull fracture enters the bloodstream and travels to the brain and spinal cord. Symptoms can develop over several hours or a few days and include high fever, stiff neck, headache and nausea.