A lot of servicemen and women go into the military because they want to – as the name implies – serve. That desire to serve doesn’t go away when they leave the military. 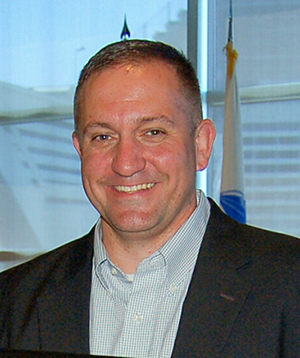 And while Charlie Spicer, Duke Energy’s head military recruiter, is careful to say that serving customers isn’t equivalent to serving one’s country, he does see parallels between a career at Duke Energy and a career in the Army, Navy, Air Force, Marines or Coast Guard. The idea of serving something greater than yourself goes beyond military service.

When veterans make their way to Duke Energy – and they are represented in every line of business throughout the company – it’s a win for everyone. Spicer, who enlisted in the Army when he was 17, cites vets’ “trainability and adaptability” as key reasons they make great employees. “In the military, you’re often charged with learning something that’s completely outside your wheelhouse,” he said. “You don’t have a choice."

“In the civilian sector, you could say, ‘No,’” he said. But in the military, it’s an order.

Veterans, by and large, have the technical skills Duke Energy needs. Besides, they’re accustomed to frequent moves and reassignments (so they’re good at adapting), and that makes them ideal teammates or leaders. They’re not going to resist change and are likely to be early adopters. Bottom line: Veterans generally have the hard and soft skills the company seeks.

Levi Yoder, a lineworker in Sanford, N.C., was on active duty in the Army and Coast Guard for eight years and has been in the Air Force Reserves for seven years. He said frequent deployments in uncertain conditions prepared him for doing line repair after storms. Other attributes he learned from the military that are important at Duke Energy: “A work ethic, safety focus, integrity and occasional long hours.”

Many veterans find Duke Energy to be an easy transition from the military. Sam Johnson is among them. “Duke was such a great fit after transitioning from the Marine Corps,” said Johnson, a Coal Combustion Products (CCP) project manager in Charlotte. “Duke provides stability and structure – something I became accustomed to during 10 years of service and four years of military college before.”

Yoder appreciates that Duke Energy also provides him flexibility. As a reservist, he still gets called up for drills and duty. His team understands that’s part of his commitment to the country. 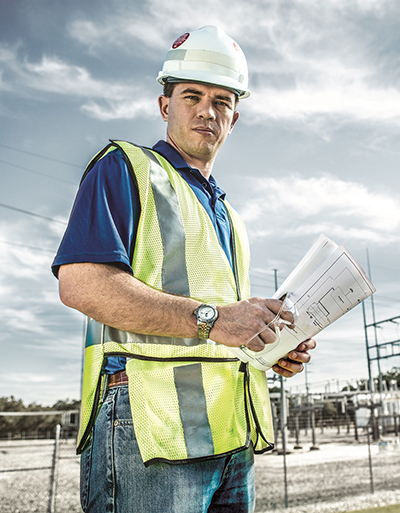 Johnson, a Marine Corps veteran, said he also appreciates Duke Energy’s focus on safety, which is second nature to him after his military training.

Harley Thomas, a CCP project manager, agrees. Not every company makes an ideal employer for former military personnel, he said. When he left the Army in 2007, he went to work as an assistant project manager in the power construction industry.

“As an Army veteran, I was used to career structure,” he said. He didn't find that at the company he went to work for. “Let’s just say I wish I could have transitioned from the Army directly to Duke Energy.”

Duke Energy has seasoned company veterans who can show the new recruits the ropes. Johnson, who also chaired the 450-member veterans' employee resource group, said the group exists, in part, to help veterans get acclimated to Duke Energy’s culture.

But it does much more than that. “We take an active role in veteran recruitment,” he said. “We work hand in hand with talent acquisition, support job fairs and speak to the importance of veteran hiring with both potential employees and to the hiring managers within the company.” 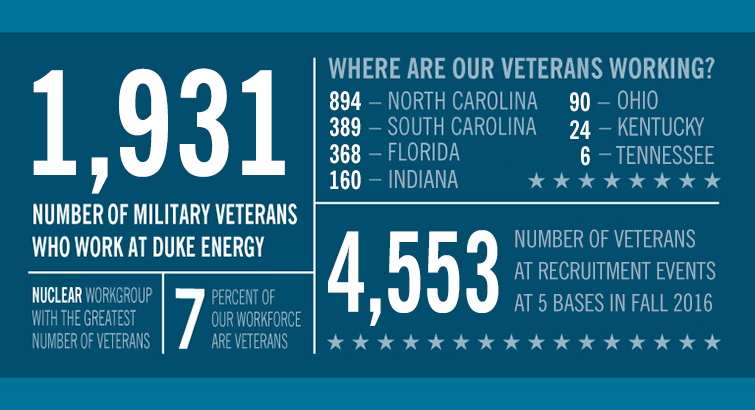 Yoder appreciated the group when he joined the company. And now, he aids Spicer in recruiting. He’s been to Fort Bragg, N.C., and Columbus, Ga., to recruit military personnel.

The group also participates in Enable America events throughout the year. Enable America is a nonprofit funded in part by the Duke Energy Foundation that provides training and job placement assistance for disabled Americans and disabled veterans.

While Charlie Spicer leads the company’s effort to recruit veterans – at career fairs, through nonprofits, at information sessions at military installations and through social media – he has a lot of support back at home base from people working to ensure veterans are set up for success.