There was no doubt Breylan and Bixley Koon would get to class on time for the first day of the 2018-19 school year. The siblings in Boiling Springs, S.C., got an escort from eight Duke Energy bucket trucks.

Breylan, who’s 8, approached Gore at a vacation bible school when he saw him wearing a T-shirt with a lineman on it. Breylan choked up when Gore told him he was a lineman, and said, “My dad was a lineman too.”

Breylan’s father, Michael, and another lineman were killed in April when the helicopter they were riding in hit a wooden power line support structure and crashed in Smethport, Pa. Koon was working as a transmission journeyman lineman for J.W. Didago Electric.

“His story really touched my heart,” Gore said. “I have two children, and I just can’t imagine what they would go through if something happened to me.” 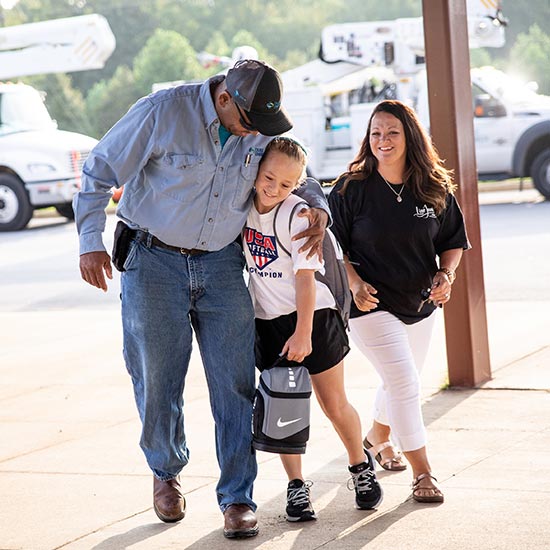 Bixley Koon gets a hug from lineman John Briggs while her mom, Amber, looks on.

Gore said he spent several weeks thinking about what he might be able to do. “I really believe that we are here for a purpose,” he said, “and I think God put me there to help him and his family. We are called to help our fellow neighbor.”

Gore, a distribution line technician, told his supervisor, Mark Baker, about his idea for the convoy. Baker liked the idea, and so did many of Gore’s fellow linemen at the Spartanburg Operations Center.

So on Aug. 20, a convoy of eight Duke Energy trucks escorted Breylan and 10-year-old sister, Bixley, for the first day of school. 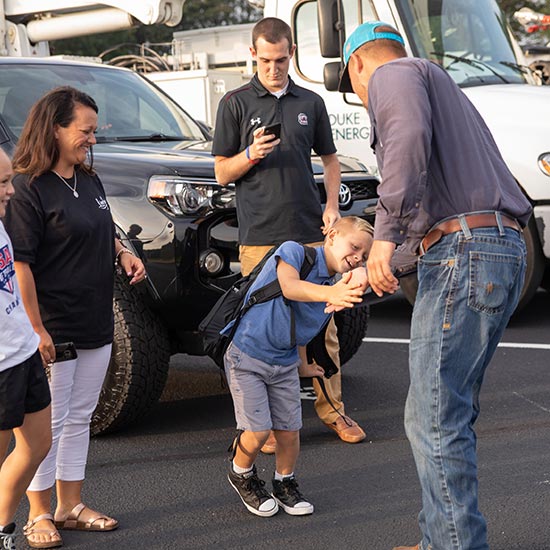 Breylan Koon is greeted by Duke Energy lineman Joel Gore as he arrives for the first day of school.

Gore said he marvels at Breylan’s knowledge of linemen and trucks. “Breylan really comes from a lineman’s family,” he said. “He knows all about bucket trucks.”

At the school, the linemen got out of their trucks and formed a line in front of the door. As Breylan, his mom and sister walked past each of them, they greeted Breylan with handshakes and high-fives until he disappeared into the hall and another school year.