Every other Saturday morning, April Edwards sits in a small, soundproof cubicle, reaching out to people who often feel alone.

In a calm, soothing voice, she reads an entire Indianapolis weekly newspaper to WFYI public radio listeners who are blind or visually impaired. She details a taste of small-town life in the city, from community meetings to high school games to dinner specials at a family-owned pizzeria.

Edwards, a Duke Energy manager in Distribution, has volunteered at the station since early 2016.

“A lot of us take our sight for granted,” she said. “I hope people that don’t have the ability to read for themselves are listening for information or enjoyment and that it helps them feel more connected to the community.”

While estimates vary, a National Institutes of Health study says that at least 3 million Americans are visually impaired even after corrective measures, and another 8.2 million live with uncorrected vision problems. The study predicts those numbers will jump to a total of about 24 million by 2050 as the last of the baby boomers reach their 80s.

The Indiana Reading and Information Services (IRIS) station serves about 4,000 listeners through free in-home radio receivers locally and a national web streaming service for those farther away. It’s one of dozens of members of the International Association of Audio Information Services.

Some public libraries and advocacy groups such as National Federation of the Blind offer programs to bring the printed word to the print challenged through downloading and telephones. Like IRIS, each has loyal followers, and some use several sources. 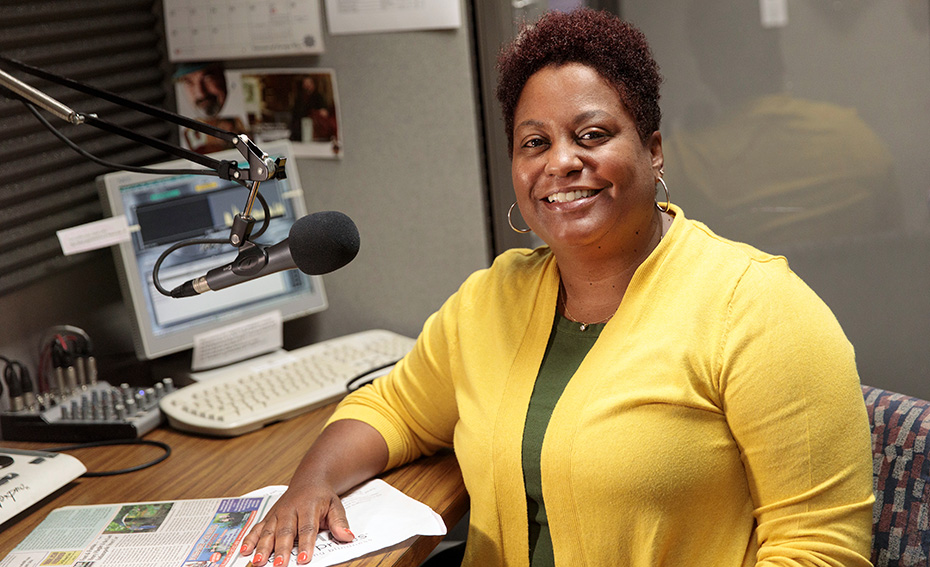 “These services are all a vital way of connecting people who are visually impaired to the world,” said Laura Williams, a librarian at the Indiana Talking Book and Braille Library. “A lot of our patrons are extremely isolated – they’ll call and say this is their life saver. It’s an important link and a way to keep them engaged.”

IRIS listeners include the blind from birth, those impaired by macular degeneration, Parkinson’s, Alzheimer’s and other debilitating diseases, and veterans whose service injuries left them unable to read.

Listeners wake up each day to the newspaper. Volunteers read the entire Indianapolis Star, reciting the mundane to the must-reads that mark a local newspaper – annunciating each news story, obituary and feature. They describe comic strips, and tell listeners about grocery and department store sales. Volunteers are ages 9 to 90 and read more than 150 publications a month.

Edwards hosts “Eastside News,” reading The Weekly View, a newspaper centered on Indianapolis’ east side. She doesn’t live in that part of the city but now knows a lot about it.

She hopes her reading resonates with listeners. Maybe they’re inspired by the firefighter who won a valor award, or need the food offered at a local pantry, or know the player who scored the winning three-pointer at the high school basketball game.

“I really enjoy providing this service. It’s a way of giving back, and I think I’ll be doing it for a long time,” Edwards said.

IRIS Operations Manager Mandy Bishop said Edwards is an asset to the station.

“She has a really good voice, she shows enthusiasm and interest, and she gets our listeners engaged,’’ Bishop said. “I love our volunteers – they’re recording something and hoping that it can change lives.”

Before his stroke, Jim Livers painted commercial buildings by day and the town red at night as a ballroom dancer and teacher. He appreciates the companionship IRIS provides, likes hearing the familiar, friendly voices, and occasionally calls in to share a joke.

“I keep the radio on all the time – I can tell what time of day it is by what program’s on,” he said. “I don’t get out much these days and they have very informative news to let me know what’s going on in the city and around the world.”