Brandi Gourdine’s change in direction is nothing but amazing.

As a senior at Mallard Creek High School in Charlotte three years ago, she had a low grade-point average and saw her friends being accepted into college. Then, the transformation started, and now as a college junior, she has her sights set on medical school.

How did she do it?

As a senior, “I was distracted in the classroom,” Gourdine said. Her baby brother had open heart surgery at three months of age. Her mom was unemployed. “I was also involved in a lot of social activities, like most young people my age.

“I was doing enough to get by, but I was not excelling. It wasn’t because I lacked the smarts; it was my work ethic.”

Then she attended a college fair at her school and learned about the Bridge program at Livingstone College in Salisbury, N.C.

Bridge programs at colleges across the country are designed to help students with academic deficiencies make the transition to a successful college experience. The Livingstone program was started in 2006 by college President Jimmy R. Jenkins Sr. Students go through an intensive, six-week program during the summer focusing on reading, math and writing. In addition to the training, students are encouraged to pursue a degree in STEM – science, technology, engineering or math.

Livingstone is a private college founded in 1879 with 1,300 students and its Bridge program has 102 students majoring in biology, 67 in psychology, 60 in computer information systems and 11 in math.

“The program is offered to late-blooming high-school graduates,” Jenkins said. “It’s intended to help students defy the odds in their college experience and live up to their potential. The program focuses on changing attitudes and behaviors, but also building relationships with those who can help, including instructors and one’s peers.”

I’m grateful for the Bridge program for giving me a second chance. I know I can do the work and be successful.

“This program is developing the next generation of leaders,” said Shawn Heath, president of the foundation. “We’re pleased to play a role in helping these young adults get on a path of success.”

That summer three years ago, Gourdine joined 100 others in the Bridge program, including students from California, Texas and New York.

“College can be intimidating,” she said. “Your parents drop you off at school and there are young people there from all over the country.” 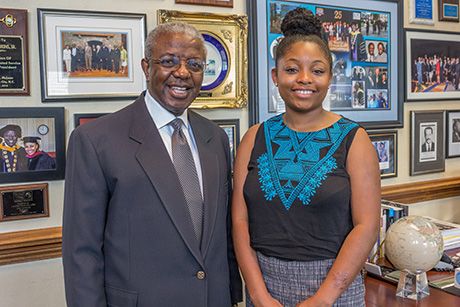 “We knew that some students on campus were critical of the program; they did not believe we deserved a second chance. But we were hungry for change. We were ready to prove to each other that we weren’t the same students that we were in high school.

“That goal brought us together.”

The program’s director, Sylvester Kyles, served as a wise and steadfast mentor. “Mr. Kyles was upfront and transparent,” Gourdine said. “He let us know that when the school year started, that’s when the real test would begin. The experience challenged us to deal with day-to-day issues.”

A bridge to a successful future

While at Livingstone College, Gourdine has excelled. She was elected president of the freshman class and represented her sophomore class on the school’s governing council.

Students in the Bridge program, she said, “have proven we’re capable academically and can serve as leaders on campus.

“I’m grateful for the Bridge program for giving me a second chance. I know I can do the work and be successful.”

As she begins her junior year, her grade-point average is 3.7, she’s majoring in biology and has her sights set on attending Emory School of Medicine in Atlanta.