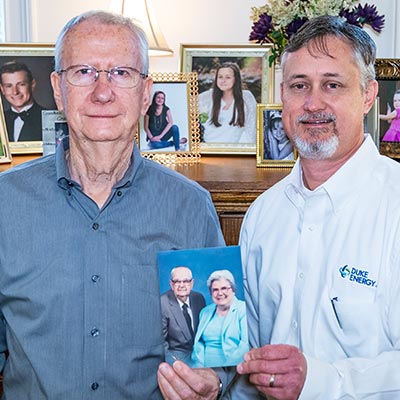 Dan (left) and Kenneth McCraw hold a photo of Shiver and Iris McCraw.

The year was 1941. Franklin D. Roosevelt was president and America was ​​​recovering from the Great Depression.

That was also the year Shiver McCraw first walked through the gates at Buck Steam Station in Salisbury, N.C., beginning his family’s century of service to Duke Energy.

Shiver’s son, Dan, often heard his dad talk about how proud he was to work at Duke Energy and decided to follow in his footsteps. And then Dan’s son, Kenneth, joined the company.

Shiver McCraw worked in plant maintenance and spent 37 years at the company, with only a few years away to serve in World War II.

“My dad lived and breathed Duke Power from the earliest time I can remember,” Dan said. “He enjoyed his work and being associated with such dedicated people. Working for Duke Energy was a natural progression for me.”

Dan worked in the generation side of the business, starting in security before being drafted in the military. Upon his return, he went to work in instrumentation and controls at the Allen Steam Station in Belmont, N.C., before joining the project team that built the Lincoln Combustion Turbine Plant. He retired in 2006 after 41 years with the company, and then came back as a contingent worker for another nine years.

Dan saw many changes during his 41 years. When he started his career, the company was known as Duke Power and served only the Carolinas. But he saw many constants over the years.

“I’ve worked with the best people in the world,” he said. “People at Duke Energy have always worked with pride, dedication and enthusiasm, which when put together creates a great team.” 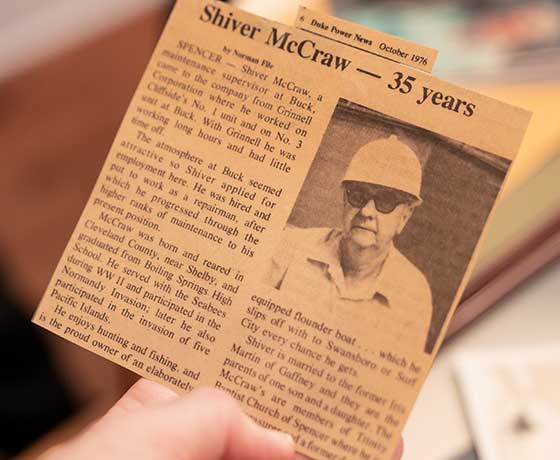 ​​​Dan says his fondest memory of that teamwork was the day following Hurricane Hugo in September 1989. He and his neighbors, several of whom were Duke Employee employees, had to clear the road so people in the neighborhood could go to work. There were also eight trees on the roof of his house.

​But work came first. After arriving at Allen that morning, a team of employees went to several neighborhoods to assist with cleanup. Dan and others remained at the station to ensure production was maintained. When he arrived home that afternoon, four Duke Energy employees – including Dan’s supervisor – were on his roof clearing the trees.

“I will never forget the working together as a team, no matter your classification,” Dan said.

Dan’s son, Kenneth, watched his dad’s pride as he went to work every day and decided it would be perfect for him to continue the family tradition.

“My grandfather would take me to Buck and walk around the coal pile,” Kenneth said. “Working at Duke Energy was all I ever wanted to do.”

After graduating from N.C. State University, Kenneth went to work with the company in January 1997. January 2019 marked the 100th combined service years of the McCraw family. Today, Kenneth works in Grid Solutions, based in Charlotte.

The McCraw family has seen a transformation in the power industry, going from when electricity was a “nice to have” to a world of today when people depend on it to power their lives. Kenneth is proud that his family played a part in that transformation – and even prouder they spent their professional lives at Duke Energy.

“Duke’s been a great provider for my family,” he said. “It enabled me to go off to college and provide an excellent lifestyle for my family and for my grandfather and father, too. It’s a neat thing to say that we have this history.”

There’s a good chance the history will continue. Kenneth’s daughter, Mary, is a junior in high school planning to go to N.C. State to major in engineering – with plans to work at Duke Energy.

It might just be that the McCraw family is well on the way to another century of service to Duke Energy.