Lockwood neighbors voted to add LED streetlights to the area.

A 1920s-era bungalow is being renovated to become the Lockwood Legends Community Center.

A fragile neighborhood near uptown Charlotte is coming back to life, thanks to a community leader who sees brighter days ahead, literally.

Christopher Dennis and the Lockwood neighborhood have come a long way in the 11 years since he moved there and found a community whose 1,600 residents had grown discouraged by crime and decline. He recalled meeting an elderly woman who had bolted shut her windows out of fear.

He asked himself, “Are you going to sit back and do nothing?”

He answered his own question: “I wasn’t afraid of the issues I saw.”

Today, Lockwood is on the rise, recently won a $25,000 Neighborhood Matching Grant from the city of Charlotte and is partnering with Duke Energy to mount 24 LED pedestrian-scale decorative lights on 12-foot poles.

Residents will match the grant in part with 663 volunteer hours devoted to improving their community. All those hours are numerical proof of the passion that earned the Lockwood Neighborhood Association the city’s 2016 Sustainability Leadership Award.

LED lighting, said Duke Energy Senior Engineering Technologist Doug Gray, is energy efficient and pedestrian-friendly, and it illuminates the streetscape while preserving the beauty of the night sky. Duke Energy offers an array of pedestrian and roadway lighting that is focused toward the ground, reducing light pollution.

Clearwater, Fla., and Raleigh, N.C., are among the growing number of communities converting to LED streetlights to improve safety and aesthetics.

Lockwood, named for Revolutionary War soldier George Locke, dates to 1915. Its proximity in the early 20th century to Southern Railway and a Ford Motor Co. plant made it a prime location for workers to buy or rent one of the bungalows built under towering willow oaks. Today, though, despite its proximity to uptown and the Amtrak station on North Tryon Street, it has the look of a tired industrial neighborhood, one that has been bypassed by the city’s growth and prosperity.

Dennis’ work earned him the unofficial title of mayor of Lockwood. 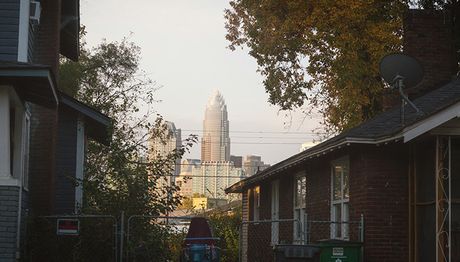 The Lockwood neighborhood north of uptown Charlotte is named for Revolutionary War soldier George Locke, and dates to 1915.

An Air Force veteran who served in Operation Iraqi Freedom and Operation Desert Storm, Dennis moved to Lockwood in 2005 to shorten the commute to his uptown banking job.

Dennis says the LED lighting and the partnership with Duke Energy represent the answer to the community’s fondest hope: At a neighborhood block party, residents voted improved streetlights as their No. 1 priority. The plan is to have these first 24 lights installed by June 2017 along Sylvania Avenue, the main thoroughfare connecting North Tryon and North Graham streets. Additional lights are envisioned in later phases.

Dennis said the streetlights will illumine a project envisioned as a centerpiece of the Lockwood renaissance.

Workers are renovating a 1920s-era bungalow that had fallen into disrepair. Due to open in 2017, the 3,200-square-foot house will be known as the Lockwood Legends Community Center. It will house three young artists, a gallery and a hydroponic garden out back. Neighbors will be able to gather for meetings, view the changing artwork and learn about this form of gardening that features a method of growing plants using mineral nutrients in water, without soil.

Today, Dennis is proud to welcome visitors to Lockwood and point out where the pedestrian lights will go. Where the artists will live and work. Where Betty Clay runs a small day care in her home on Sylvania Avenue. While the children are asleep inside, Clay comes outside to greet visitors and point out bungalows being renovated by new homeowners. Lockwood has been home for 20 years. She’s not going anywhere. “I love the people here. They’re so friendly and kind.”

Dennis hears this and nods. With the help of the city and Duke Energy, he declares this is a new day for Lockwood.

“The streetlights say people are taking this community seriously,” he said. “People now see the viability of Lockwood. People now know our name.”

All-terrain wheelchairs bring freedom and the beach to Florida residents