In activities traditionally dominated by tough guys, Whitley Proctor and Alyssia Whitney can hold their own.

They both kickbox. They coach co-workers on healthy lifestyle habits. And while they spend their days in an office, they’ve challenged themselves to learn the ins and outs of cutting pipes, digging ditches and setting natural gas meters.

Their intense training paid off and after recently competing at Duke Energy's Piedmont Natural Gas annual employee rodeo in Charlotte, they’ll be the first female team to represent the company at the National Gas Rodeo.

“We’re really excited. We put a lot of work and effort and a lot of our personal time in it so we can be competitive,” Proctor said. “It’s amazing for us to be competitive with the guys who do this every day. We’re proud of ourselves, because we’ve come a long way, but it didn’t come easily.”

Their friendship began on the job, in Piedmont’s Resource Center office in Nashville. Both work in administrative support positions for Field Operations and Field Customer Service. Hired within six months of each other, they hit it off and became mutual professional sounding boards. In 2014, they first competed in the rodeo as part of a four-person team. They did OK, then tried it again the next year before becoming a two-person team in 2016. 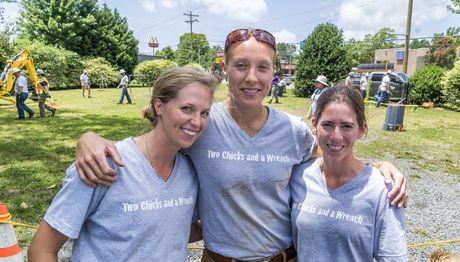 People call them Ying and Yang. “I'm more the nervous type, she’s more, ‘We just gotta do our best.’ She counter-balances me,” Proctor said.

Whitney finishes her sentence: “I say, ‘let’s just have fun.’”

It’s unusual for all-female teams to compete in the rodeos. The games are largely dominated by the mostly male workers who dig ditches, cut pipes and install meters every day. Of the 16 teams competing in the Charlotte rodeo, two were female only.

The other female team also fared well. Like their Nashville counterparts, Lauren Crowe and Erin Jedlikowski, who work in Piedmont’s corporate office in Charlotte, trained hard.

“It takes a lot of practice, you can’t do this without having a lot of endurance,” said Crowe, who’s a long-distance runner, former college soccer player and mother of two young sons. Still, the pipe-cutting event challenged all that and gave her a renewed appreciation for the workers who do those jobs so skillfully. She and Jedlikowski, a CrossFit devotee, lost time when they didn’t set the pipe correctly. And got an unpleasant surprise to find the sand pit they had to dig through by hand had a lot more rocks than sand. 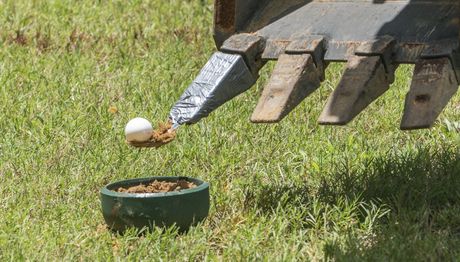 Again, in fairness to the women, the guys who scored higher have a lot more on-the-job training in the rodeo events. The top-ranked teams combine decades of daily experience digging through rough terrain, cutting pipes and driving forklifts. The first-place winners cut their pipe in 11 seconds. It took Crowe and Jedlikowski 51 seconds.

And while everyone competed fiercely, they also cheered for, high-fived and hugged opposing teams afterward. Besides Charlotte and Nashville, contestants hailed from Piedmont’s service areas including Wilmington and Burlington in North Carolina and Spartanburg, S.C.

“It promotes company pride, competition and teamwork,” said Lori Benfield, general manager of Gas Field Customer Service, who helped recruit the women to join the rodeo. The company normally sends the top four teams to the nationals, but this year committed to add an all-female team. Whitney and Proctor came in fifth place. 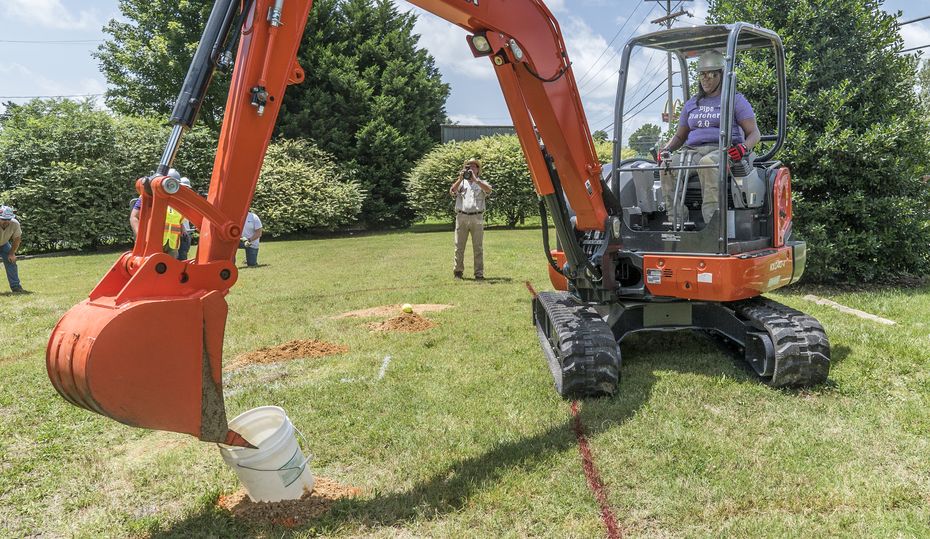 “We want to get different people involved, whether they’re men or women, new to the company or not,” Benfield said. “This showcases what our men and women do in the field every day. This is a hard-working group.”

Proctor, 28, and Whitney, 26, say they’re excited to show other women that skill and hard work can break through gender barriers. They’ll compete at the National Gas Rodeo in Denver with about 50 other mostly male teams from public and private utilities.

The Piedmont women said the rodeo shows colleagues and executives they work hard and accept challenges.

“With Piedmont sending the first female team, we’re showing great strides as a company,” Proctor said. “It shows other women that we can do this too. It is a lot of work, but we’re grateful that they’re giving us the opportunity to show our skills as women in a male-dominated field.

“We hope to compete at our best in Denver and give us girls at Piedmont a good name. We’ve been working our butts off and we hope it pays off.”

Administrative Specialist III, Customer Service, Nashville.
Education: Graduated from The University of Tennessee in Knoxville, specializing in Business Management and Entrepreneurship.
Hobbies/interests: Kickboxing, making and selling crafts, hanging out with her Doberman, Iggy.
On the side: Bartends for a caterer.
Favorite Song: “Queen of My Doublewide Trailer” by Sammy Kershaw.
Favorite Saying: “If you don’t go after what you want, you’ll never have it. If you don’t ask, the answer is always no. If you don’t step forward, you’re always in the same place.”

Administrative Specialist II, Operations and Maintenance, Nashville.
Education: Graduated Tennessee State University with a degree in Business Administration.
Hobbies/interests: Kickboxing, swimming, jogging and being a favorite aunt to four young nieces.
On the side: Bartends at the Bridgestone Arena in Nashville.
Favorite Song: “Be Encouraged” by William Benton.
Favorite saying: “Accept what is, let go of what was, and have faith in what will be.”

Supervisor, Data Performance.
Education: Graduated from Catawba College (Salisbury, N.C.) as a psychology major. Certified Black Belt.
Hobbies/Interests: Running, soccer.
On the side: Is the married mother of two young sons.
Favorite Song: “Everlong” by The Foo Fighters.
Favorite Saying: “When there is no wind, row.”