Your guide to a cleaner energy future

That goal and others were released in the company’s 2016 Sustainability Report. The company plans to cut its carbon dioxide emissions from 2005 levels 40 percent, from 152 million tons to 91 million tons, by 2030.

“As technology and customers’ expectations evolve, Duke Energy is responding by investing in innovative new solutions to power the lives of our customers with reliable, affordable and increasingly clean energy,” said Duke Energy CEO Lynn Good. 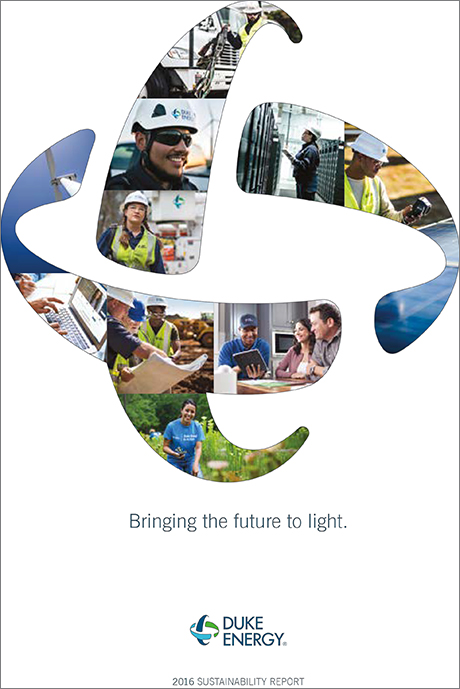 Click the image above to read our 2016 Sustainability Report

How can it be done?

This decade alone, a steady mix of closing older, coal-fired power plants, building cleaner natural gas plants and a big push toward more renewable generation have led the company to already be nearly 30 percent below the 2005 figure.

The plan going forward looks similar. In the next seven years, the company plans to replace 2,000 megawatts of older coal-fired generation. (It has retired 5,400 MW since 2011.)

Meanwhile, the natural gas generation portion of the company’s energy output has risen from 5 percent in 2005 to 28 percent. It’s expected to rise to 36 percent by 2030.

Renewable energy generation has been rising, with about 3,000 MW of wind and solar in the company’s energy mix. Combined with nuclear power and hydro, these non-carbon sources account for about 38 percent.

The report tracks the company’s progress on other sustainability goals and programs.

Duke Energy has a long history of being among the top sustainable companies. For the past 11 years, Duke Energy has been a part of the Dow Jones Sustainability Index for North America.

“How we generate energy is more important than ever before," Good said, "and we’re making long-term investments that will deliver a lower-carbon future.”