Duke Energy Renewables has taken a leading role in protecting wildlife and their habitats near wind turbines, and the best example is at Top of the World Windpower Project east of Casper, Wyo.

The clusters of wind turbines, with rotors as wide as a passenger jet’s wingspan, present a potential threat to eagles in some areas of the wide-open mountain states. And after 14 golden eagles were killed at Top of the World and Campbell Hill Windpower Project near Casper in the early part of the decade, the company implemented a variety of measures to protect eagles. 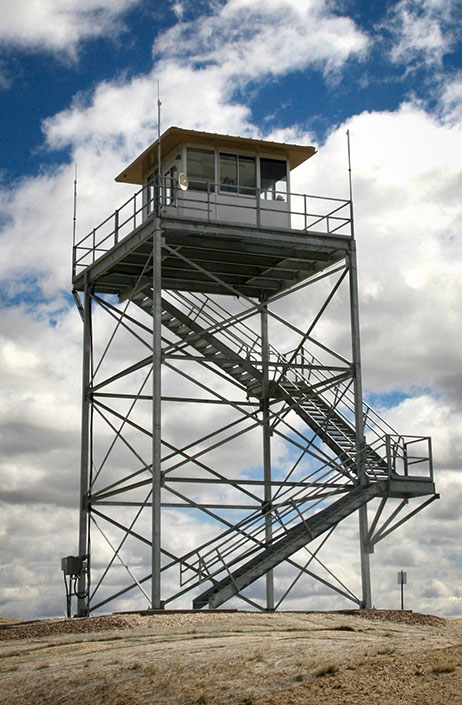 “Wind energy is clean, with no emissions, and it doesn’t use any water,” says Duke Energy Renewables’ Environmental Director Tim Hayes. “However, there is no free lunch, and every form of generation has an impact on the environment. It’s up to us to deal with the issues we have.

While golden and bald eagles are not endangered, they are protected. Laws prohibit killing, selling or harming eagles, their nests or eggs without a permit. Later this year, the Obama administration is expected to release a new rule revising the 2009 eagle permit rule that will govern for 30 years how commercial activity, like generating electricity, can coexist with eagles and their habitats.

Birds colliding with turbines are a concern worldwide. Small birds, such as songbirds and sparrows, the American Wind Wildlife Institute (AWWI) says, account for about 60 percent of bird fatalities at wind facillities in North America. Less than three in 100,000 human-caused bird fatalities are attributed to wind energy, according to a 2007 National Academy of Sciences study.

Duke Energy in 2013 settled federal misdemeanor charges over its eagle fatalities, agreeing to fines and restitution of $1 million, and various programs to monitor and reduce eagle fatalities.

Before taking steps to reduce eagle collisions, it’s important to understand the habits, flight movements and migration patterns of these birds.

Duke Energy Renewables is working with the U.S. Fish and Wildlife Service on an eagle trapping and tracking project. Technicians at Top of the World and the wildlife service trap golden eagles, fit them with GPS transmitter backpacks and release them back into the wild.

“A female eagle was trapped on the site in the winter of 2014, and what we have seen is simply amazing,” Hayes said.

In early spring, the eagle migrated north to Alaska’s northern coast, where she spent the summer. That fall, she returned to the area to spend the winter.

“It’s remarkable,” Hayes said, “that this eagle travels about 2,500 miles in just a few days.”

This study is providing valuable information about eagle movements, migration and how the birds use the landscape.

How eagles are protected

What has Duke Energy Renewables done to protect eagles?

“Specifically, we promptly remove wildlife and livestock carrion from the site so eagles won’t be attracted by this potential food source,” Hayes said. “We’ve tested a variety of technologies including radar to assist in the detection of eagles – the same technology used by our military to detect incoming mortars and missiles; and we’ve tested both visual and sound devices to deter eagles away from wind turbines.” 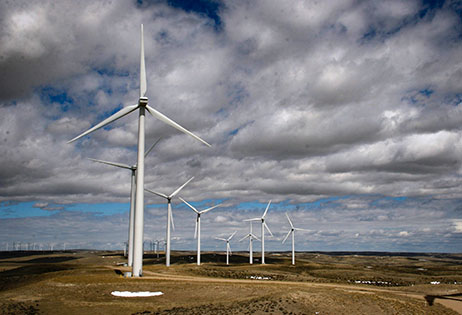 Top of the World windpower project in Converse County, Wyo.

While these techniques have shown mixed results, Duke Energy Renewables, conservationists and other stakeholders are hopeful about new technologies.

“We have hired a wildlife supervisor and six wildlife specialists who are on the site during daylight hours 365 days a year,” Hayes said. “These observers scan the sky from a tower and from other points and immediately curtail turbines when eagles are spotted and are at risk of collision. This program is showing favorable results.” Duke Energy Renewables has constructed an eagle observation control tower at Top of the World to observe eagles and immediately curtail the turbines when the birds are flying nearby.

The observers also use a camera detection system known as IdentiFlight.

Duke Energy Renewables is working with Renewable Energy Systems and Boulder Imaging to bring IdentiFlight to market. Currently, wildlife specialists use this camera system as another set of eyes to alert them of an eagle’s presence.

“This technology is showing very promising results,” Hayes said, “and we hope it will prove to effectively detect eagles, whether it’s used to assist our wildlife specialists or eventually be programmed into control software to automatically curtail turbines.”

To measure the effectiveness of the IdentiFlight camera detection system, AWWI is coordinating an independent assessment. AWWI is a science-based nonprofit made up of conservation organizations, wind companies, state wildlife agencies and others to help develop wind energy while protecting wildlife. (Duke Energy Renewables is a long-time partner of the AWWI and Hayes is a board member.)

Duke recently hosted AWWI’s board meeting in Casper, and members – including representatives from Audubon Society, Defenders of Wildlife, Natural Resources Defense Council, Environmental Defense Fund and National Wildlife Federation, among others – toured Top of the World and observed the technology.

"We can achieve more clean, renewable wind energy and better conservation outcomes if we work together," said AWWI executive director Abby Arnold. "Science and collaboration are the keys to success."

When sensors atop tall poles detect movement, they focus a camera on the bird. A computer identifies the type, location and flight direction of the bird. Once the bird is determined to be an eagle, a wildlife specialist quickly analyzes the risk level based on flight height, distance to a turbine, and behavior of the eagle. For example, if the eagle’s head is up, it’s watching where it’s flying, and if the head is down, it’s hunting and not as likely to notice aerial obstacles.

Other on-site biologists use binoculars to confirm the location, flight path and behavior. When an eagle threat is confirmed, the turbine blades can be stopped in a matter of seconds. “We take a pretty conservative approach to turbine curtailments,” Hayes said. “When in doubt, we curtail.”