Chris hopped off the bus in the woods surrounding Duke Energy’s McGuire Nuclear Station, and the marbled black and white stones with glittery specks on the gravel driveway grabbed his attention. He and his friends started picking the rocks up.

That wasn’t gravel they were collecting, it was granite – the first of many souvenirs the group of 15 6 and 7-year-olds from a Charlotte Boys and Girls Club would capture on a Wildlife Detectives hike as part of North Carolina Wildlife Federation’s Great Outdoors University.

The program, sponsored in 2015 by a $60,000 Duke Energy Foundation grant, takes children ages 6 to 18 who live in urban areas of Charlotte on outdoor excursions like hiking, fishing or biking.

Children spend half as much time outdoors as they did 20 years ago, according to the National Wildlife Federation. In addition to physical benefits associated with exercise, spending more time in nature can lead to lower stress levels and sharper critical thinking skills.

This is the third year the Duke Energy Foundation has sponsored the program, but the first year Duke Energy has hosted field trips on its property.

“We have the resources, expertise and the time that the company gives us to help get these kids out in nature,” Scott Fletcher, Duke Energy natural resources manager said. “A lot of the kids don’t really have that opportunity because they’re from more urban areas.”

The 400 acres around the nuclear plant provide the perfect place to showcase nature for children who don’t have easy access to outdoor activities. Except for one of the company’s largest substations and a gravel road, the woods are undisturbed – so undisturbed that some of the children were shocked to find they were still in North Carolina.

The plant is only about 20 miles north of Charlotte in Huntersville, but it does feel different. It’s a quiet home for a herd of more than 50 deer, four types of snakes, red foxes, turkeys, beavers, countless insects and even a bald eagle, according to Fletcher.

Armed with binoculars, magnifying glasses and field guides, the group marched through the woods down steep hills, dodging spider webs and stepping over logs to see what they could find. Fletcher lifted up plywood boards placed throughout the property that are used by Davidson College to build its Herpatile Atlas – a record of what insects are in the area – revealing snails, ants, and millipedes. 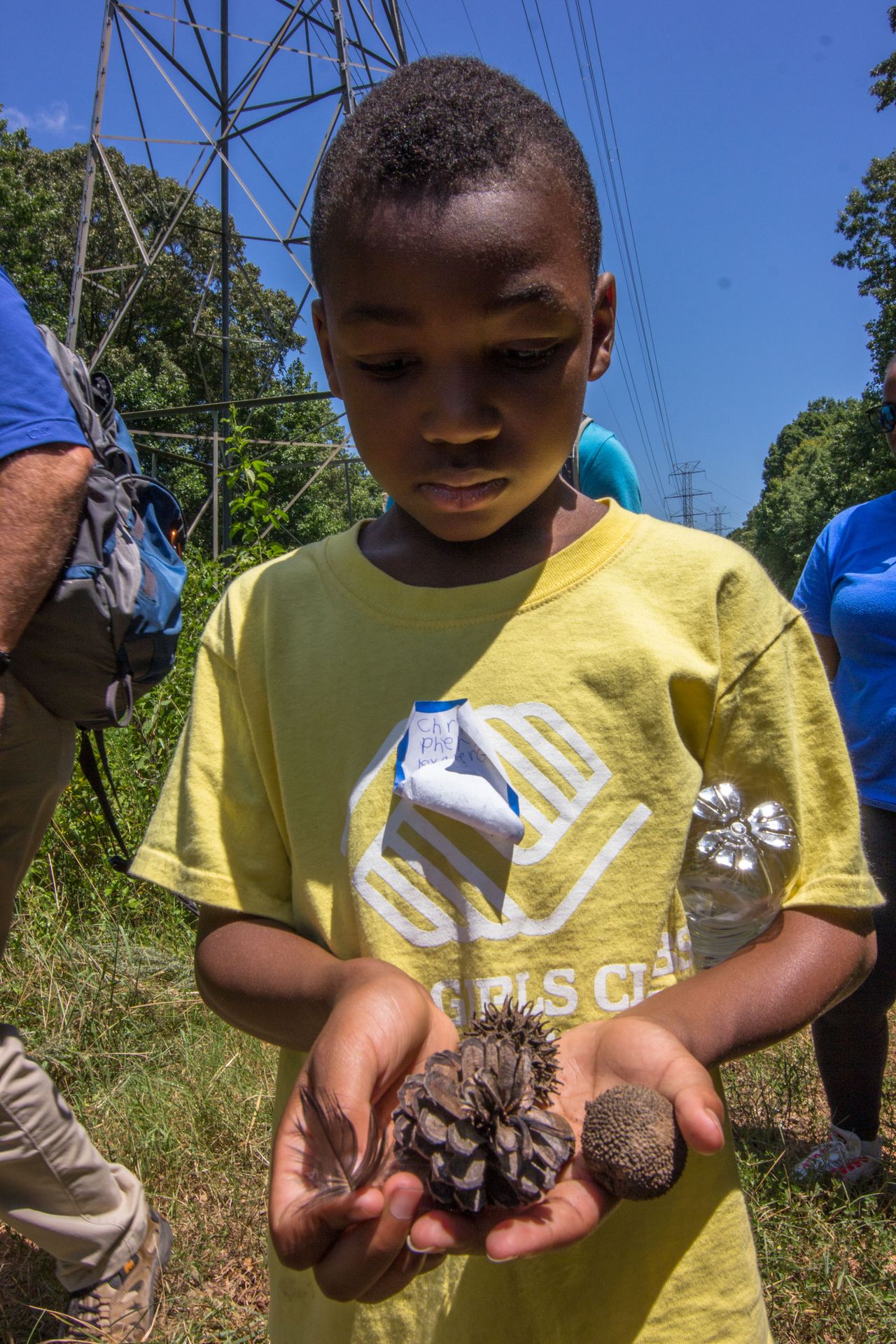 Chris displays his collection from the hike including a pinecone, duck feather and sycamore seed.

Fletcher told the children how millipedes have a cherry scent because they secrete cyanide as a defense. He pointed out different plants, and explained why a blueberry bush has thorns (to protect itself from predators). He told them how sweet gum tree leaves are sweet like their name suggests, and he plucked a ginger plant leaf so they could see for themselves what ginger smells like in the wild.

But Kendall said, “How about we find a snake!”

They didn’t find a snake, but they crowded around Fletcher when he found a red spotted newt, a relative of the salamander, and identified it in their field guides.

As they marched back to the bus, Kendall said he plans to look for more creatures near his house ­– he expects to find birds, lizards and ants. Chris gathered two handfuls of treasures, including a pinecone, muddy sycamore seed and a duck’s breast feather, and said he plans to show his nature finds to his family when he gets home.

“A lot of them are good, budding scientists,” Fletcher said. “That’s the beauty of this Great Outdoors University and why we can help them.”