Those traits sounded perfect to Joe'l Gonzalez, a lineman based in Charlotte and former Army infantryman now with the N.C. National Guard. He heard that Duke was hiring and knew it would be a good match. 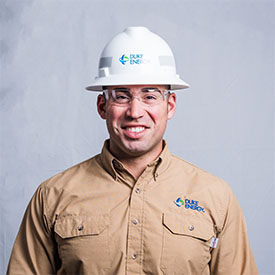 “My service career prepared me for working at Duke Energy in many different aspects,” Gonzalez said. “I learned how to be professional, punctual and to remain organized in chaotic situations.”

But more importantly for Gonzalez, being a lineman at Duke Energy is something more. “The organization has been amazing for getting veterans in to civilian careers, not just jobs.”

Matt Flaherty also sees his position as more than just a paycheck.

“This career is a very good way to make a living and will provide a very comfortable lifestyle for you and your family,” Flaherty said, “as long as you are willing to work for it.” 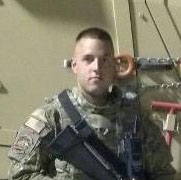 Flaherty, a lineman based in Sumter, S.C., came to Duke Energy after a career in the Air Force as an air transportation journeyman. He also feels the military training he received was the perfect precursor for working at Duke.

“In the military you are given a task or a mission and you work with your team to accomplish the task or mission,” Flaherty said. “With Duke Energy, it is very similar. Each day we come in we are given different tasks or jobs and we go out as a team and accomplish these tasks or jobs safely and in a timely manner.”

Both Gonzalez and Flaherty appreciated the support they received from Duke Energy, both during the hiring process and while working. For Gonzalez, that is vital as he continues in the N.C. National Guard.

“Duke Energy makes it less stressful to be a citizen soldier,” said Gonzalez. “I am proud to be part of a company that allows me to serve in my community, for my country and for our allies. Not only does Duke Energy allow me to do so but they also fully support my efforts. Duke Energy understands what it means to help those in need.”

And Flaherty especially appreciated the help he received from Spicer. “It was a good feeling having Charlie, who himself is a veteran, there to assist or answer any questions that I had,” Flaherty said.

Spicer is quick to give credit to the entire Duke Energy recruiting team and reaffirmed his commitment to matching vets with lineman positions.

“I am surrounded by a team who is dedicated to bringing military talent into our organization,” he said. “Veteran hiring makes sense for our lineman roles: They have the aptitude and can meet the physical demands of the job. It’s a natural fit.”

How to become a lineman

Are you a veteran on the market? Jobs are available