Footage of a red bat taken by Duke Energy endangered and threatened species biologist Will Ricks.

Bats are hard to find. They’re small (some weigh less than three pennies), they fly by night and hide during the day, but perhaps the most challenging part is that there are fewer of them than there used to be.

Numbers are dropping because of White Nose Syndrome, a disease caused by a fungus that’s spreading across the country. In North Carolina’s mountains, bat researcher Han Li said the population of certain species has dropped by 99 percent.

That’s where the North American Bat Monitoring program comes in.

Scientists formed the program to help track the decline and find a way to reverse it, and Duke Energy is helping in an unusual way. As part of its license to operate hydroelectric power plants on the Catawba and Wateree rivers in the Carolinas and an agreement with state and federal natural resource agencies, the company is required to survey bats each summer for 40 years to provide information for continued protection of their habitat and overall health.

“We’re opening up the project to be one of the largest NA Bat studies in the country,” Duke Energy threatened and endangered species biologist Will Ricks said. 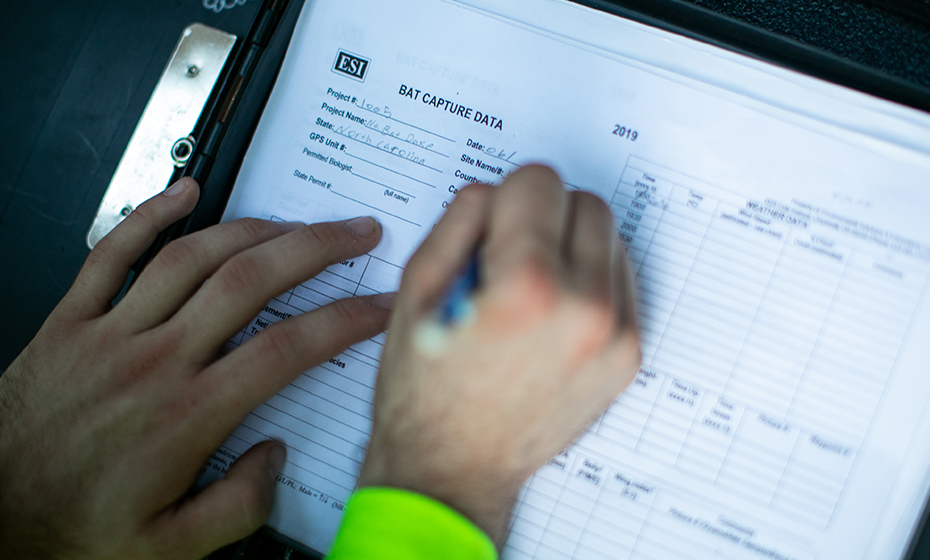 During surveys, researchers keep track of temperature, cloud cover and other observations.

The data collected will feed into the national database, and Li, who manages North Carolina’s research for the NA Bat program, said having this data is a huge help. Duke Energy’s study covers 25 sites along 225 miles of river, which hasn't been studied much. It’s a special area, too, because the river is somewhat of a border between the mountains, where White Nose Syndrome has been prevalent since 2009, and the Piedmont, where the disease is just starting to appear.

The fungus, which leaves a fuzzy white patch on a bat’s nose and wings, hitchhiked from Europe to New York on an unsuspecting traveler in 2006. Like bats, it thrives in cool, dark caves. So far, it’s present in 33 states and has killed millions of bats that hibernate. It’s spreading so rapidly that some scientists predicted regional extinction for a few species, like the little brown bat. Before White Nose Syndrome, it was one of the most common species in North America. Like most bats, it’s an important pollinator and pest controller with one bat eating up to 1,200 insects per hour at night. Many ecosystems depend on bats – without them, they would gradually collapse. 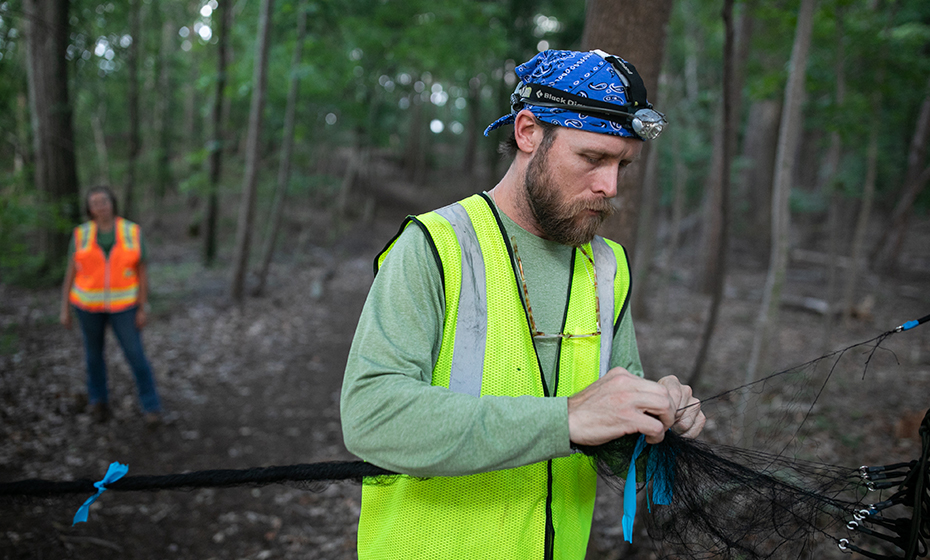 Ricks is managing the study with help from ESI, Inc., a consulting firm that surveys landscapes for plants and animals of interest. Justin Wilson, a wildlife biologist with ESI, has spent each summer (when bats are most active) since 2006 looking for these hard-to-spot critters all over the United States.

Because bats are so tricky to find, there are only two ways to study them.

The first is acoustic monitoring where a microphone records the high-frequency signals that bats use for echolocation. The recordings are matched with bat calls in a database, and researchers receive a report with bat species detected nearby. It’s a good indicator of what bats are present, but it doesn’t tell researchers anything about the health of the bats.

To get that information, they use a more hands-on method: mist netting. 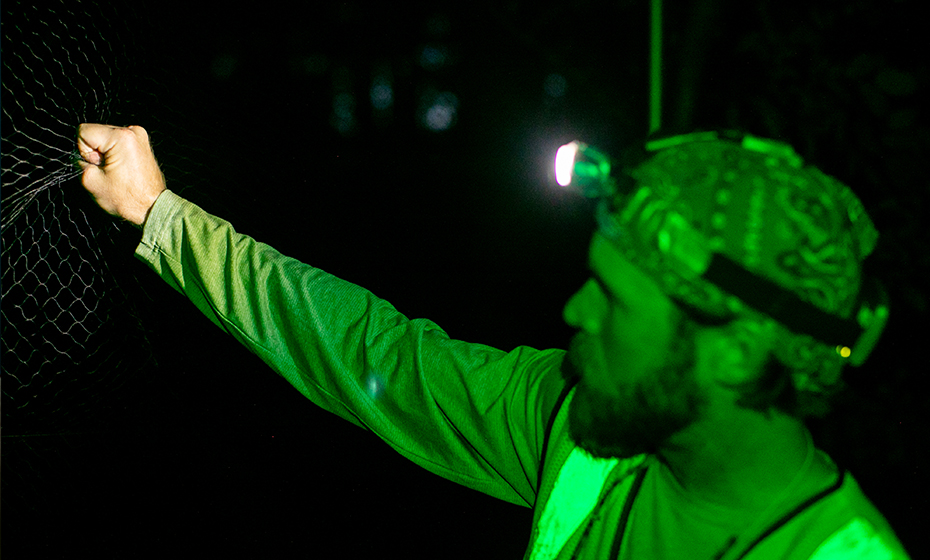 Researchers will check the nets for bats every 10 minutes from roughly 8 p.m. to 2 a.m.

Researchers like Wilson set up nets that cover a small strip of a large sky and hope a bat flies into it. It looks like a volleyball net, but the material is made of a fine, black nylon that’s almost invisible at dusk. Wilson sits in a folding chair and walks to the net every 10 minutes from about 8 p.m. to 2 a.m. to see if he’s caught a bat.

A good night might yield five bats where an average night has one or two. Sometimes, Ricks said, you don’t catch any at all.

When he does catch a bat, Wilson wears blue latex gloves and carefully removes the bat from the netting. All bat handlers have been vaccinated for rabies, and he’s learned how to handle the fragile creatures without harming them or getting bit while he records measurements including weight, sex and age. Sometimes they’ll attach a tracker to certain endangered species so they can learn more about their habits. 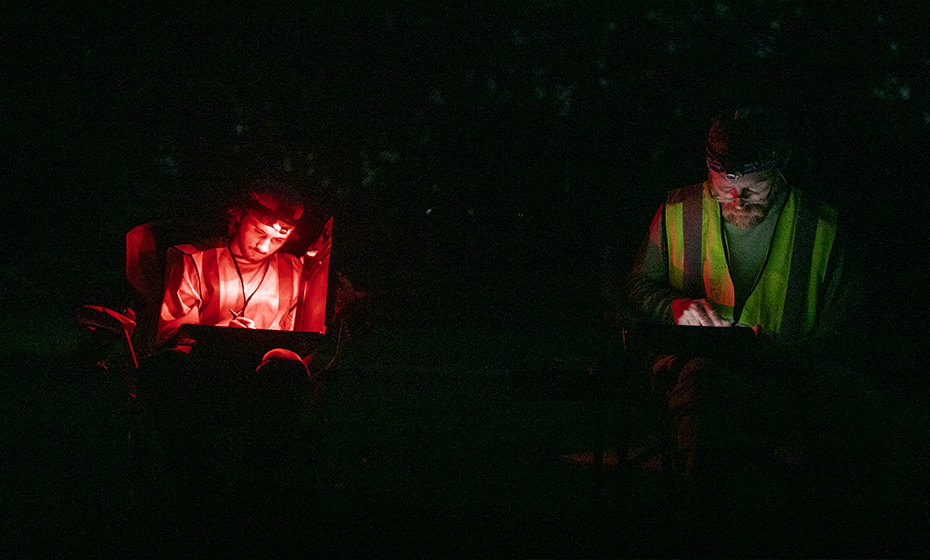 By headlamp, Wilson and his teammate Jared Kleinhenz record data during the survey.

The fungus that causes the disease needs cool temperatures, so scientists think the warmer coastal region of the Carolinas could be a last resort for bats that are able to relocate. Forests and rivers, like the Catawba-Wateree, provide a dark, safe route from the mountains to the coast as the centers of the states become more populated with people and lights.

Other possibilities for a comeback include bats developing an immunity or scientists finding a way to stop the fungus from spreading, but Li said, there’s still a lot to learn. In the meantime, Wilson will set up his folding chair to look for bats and answers.

How Duke Energy works with bats

From Duke Energy’s wind farms, where it’s installing technology to deter bats from flying near turbines, to power line rights-of-way, where the company plans work around roost sites in partnership with state agencies, the company is committed to protecting wildlife while providing power that’s safe, reliable and affordable.

How can you help bats?

Li suggests preserving bat habitat near your home by installing bat houses and not removing old trees and stumps, which are popular roosting sites for bats. You can also contribute to the North American Bat Monitoring efforts by participating in its citizen science program.