What Lloyd Yates learned along the way

Lloyd Yates doesn’t forget the people who gave him a lift.

His parents, who insisted that he do something with his life. The Salvation Army, which provided a safe space to play. And the mentors who offered advice, friendship and the codes to crack to rise through the ranks of a major corporation.

As a kid growing up in a tough, racially segregated town near Philadelphia, an executive future seemed unlikely. He didn’t meet doctors, lawyers or businesspeople. The only affluent African-Americans he knew of were professional athletes or entertainers.

Today, an elevator carries him to the 48th floor of the Duke Energy Center in Charlotte, where he’s executive vice president of customer and delivery operations, and president of the Carolinas region. It’s that role that put him on Savoy magazine's 2017 Power 300: Most Influential Black Corporate Directors. 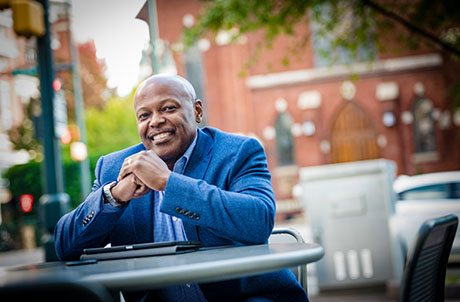 “To get to the highest floors, somebody has decided to give you the guidance you need to get ahead,” Yates said. “I don’t say that to underestimate the value of hard work. Of course you need that, but that guidance really helps clear pathways. People have done it for me; now I do it for others.”

The early lessons started at home.

Yates’ mother worked as a nurse’s aid in a state mental institution, his dad drove a truck for a furniture company and they raised their three children. Many of their neighbors had similar jobs, and nearly everyone Yates knew had to make tough choices about how to stretch paychecks to cover bills.

He was a seventh-grader when the schools in Norristown, Pa., integrated, sending him and his neighborhood friends to a once all-white school. He said he would walk fast through the white neighborhoods on his way to the new school: “They weren’t real big on us going to their school. They’d threaten us and call us names.”

By early high school, he entered what he describes as his “bad period, where I was doing all the wrong stuff, skipping school and hanging out on the corner.” Then in 10th grade he nearly died when he contracted gangrene. It’s a condition, often caused by an illness or infection, that causes healthy skin cells and tissue to die. When he healed, he decided he could do better.

By the last two years of high school, his grades soared, he aced his SATs and he knew he wanted to be an engineer. He always liked taking things apart — if the washing machine broke or something needed to be re-wired, his dad asked him to fix it.

His mother believed that education led to a better future. They didn’t have money for college, so Yates cobbled together a mix of grants and loans to pay his tuition at the University of Pittsburgh. Every three weeks, his mother sent him $25 for food and expenses.

His father sent a bus ticket, and Yates began his career as a startup engineer at PECO Energy.

Today, Yates’ window-lined office offers a stunning portrait of Charlotte’s prosperity. It provides a clear look into Bank of America stadium, and a pair of binoculars would offer a novel way to watch a Carolina Panthers game. Construction cranes abound as more and more luxury apartments, condominiums and skyscrapers rise from the center city.

Despite the lofty view, he’s well aware of Charlotte’s troubles: a shortage of affordable housing, whole neighborhoods shrouded in poverty and its last-place rank of 50 major cities for a child born poor to rise to the middle class. Hence his donations, of money and time, go largely to agencies like The Salvation Army and others that help the region’s neediest families.

It’s personal: As a kid, he’d play basketball and do homework at The Salvation Army’s Boys and Girls Club. And when his family’s Norristown home burned down, leaving them with virtually nothing, The Salvation Army stepped in to help.

On a recent stormy evening, Yates, 57, talked about the importance of mentoring, and how lucky he was to have adults who cared: “When I see these kids, I see myself. I appreciate that now, you have so many people in neighborhoods like that where no one’s encouraging you.

“The idea of somebody like me, sitting in an office like this … nobody there could fathom this. Much of my success is because somebody helped me.”

That success carries great responsibility. On this night, he monitored reports of powerful thunderstorms and tornadoes in North Carolina and South Carolina. More than 100,000 customers had lost power, and he searched his computer screen for weather and operations updates.

He takes those customers seriously, both in times of natural disaster and in policies that affect their everyday lives. More than a third of Duke Energy’s customers live in low-income households.

“When we have to raise rates — I do not take that lightly,” Yates said. “I know what it’s like when you don’t have enough money to pay those bills, or for groceries or to heat your house in the winter. I am very sensitive to that.” 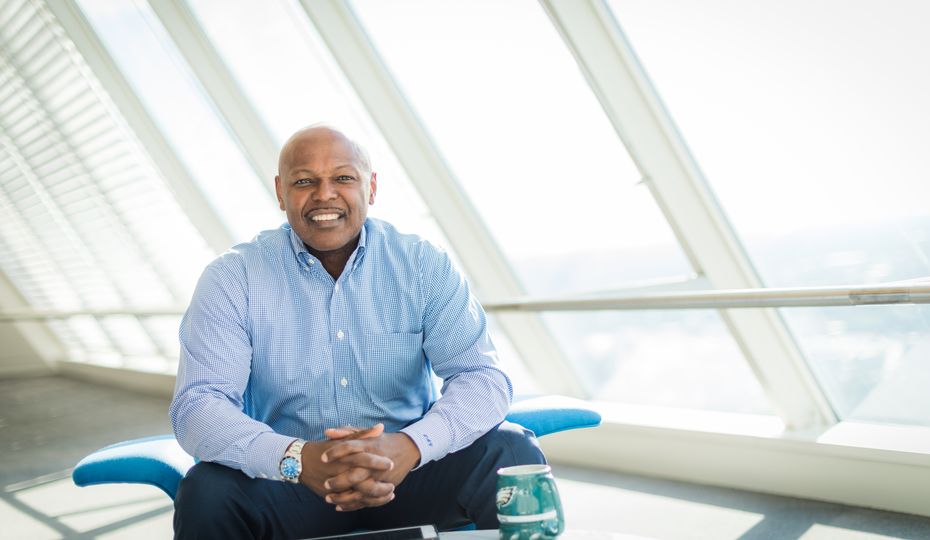 As a top boss, he also keeps tuned in to issues facing Duke Energy’s lineworkers, customer service specialists, engineers, mechanics and administrative staffers by getting out in the field often.

“He’s one of the best people at balancing the company, the employee and the customer,” said Michael Luhrs, who was just starting his career when he met Yates 19 years ago. Luhrs said Yates impressed him immediately as a leader so he later sought him out as a mentor.

“And he’s always been there for me,” said Luhrs, now vice president of retail programs and customer solutions at Duke Energy. “He’s always straightforward, he does a phenomenal job of listening, and sometimes giving you the hard truth … he just connects with people in an exceptional way.”

Rufus Jackson was a plant manager at Progress Energy when he met Yates 15 years ago. He said Yates, then a high-ranking Progress executive, offered advice and encouragement as their careers advanced and after the company’s merger with Duke Energy in 2012.

“I used to watch him in meetings, and learned so much,” said Jackson, now vice president in  distribution and operation at Duke Energy. “He was so respected, but he wasn’t intimidating.

“He’s an excellent thinker, he’s approachable and he’ll challenge you, but he’s not overbearing,” Jackson said. “He’s willing to talk to any person at any level. So many people — once they get to the top floor — they detach themselves. Lloyd has never forgotten where he came from.”

His day starts: At 5 a.m. at the YMCA with cardio and strength training workouts.

Hobbies: Spending time with his family and working on house projects.

If he weren’t an executive he’d be: A homebuilder and general contractor.

Something that may surprise people: He once paired with a professional ballerina for a Charlotte version of “Dancing with the Stars,” a competition to raise money for charity.

Best advice he’s ever gotten: “Don’t just do it for the money or your ego.”

Advice he gives: “Find something you like to do and you’ll be happier and more successful.”