What it's like to be an engineer in the air

Tomas Mendez had seen wind turbines before, but it wasn’t until he was standing under them that he realized how massive they actually are. 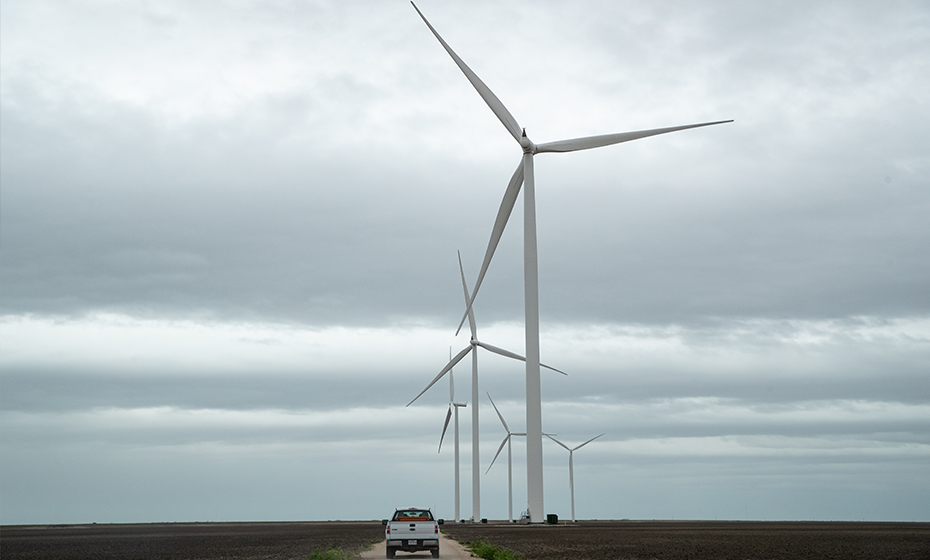 The hundreds of wind turbines at Los Vientos Wind Farm near Brownsville, Texas, tower over farm land at 300 feet tall – the height of the Statue of Liberty – and Mendez would soon have a greater appreciation for the height after climbing to the top.

He’s an electrical engineer for Duke Energy Renewables, and his job is to make sure the parts that make up wind and solar farms are working together. Sometimes, that means climbing to measure for new parts or troubleshoot problems so wind technicians can order the right equipment and make repairs. 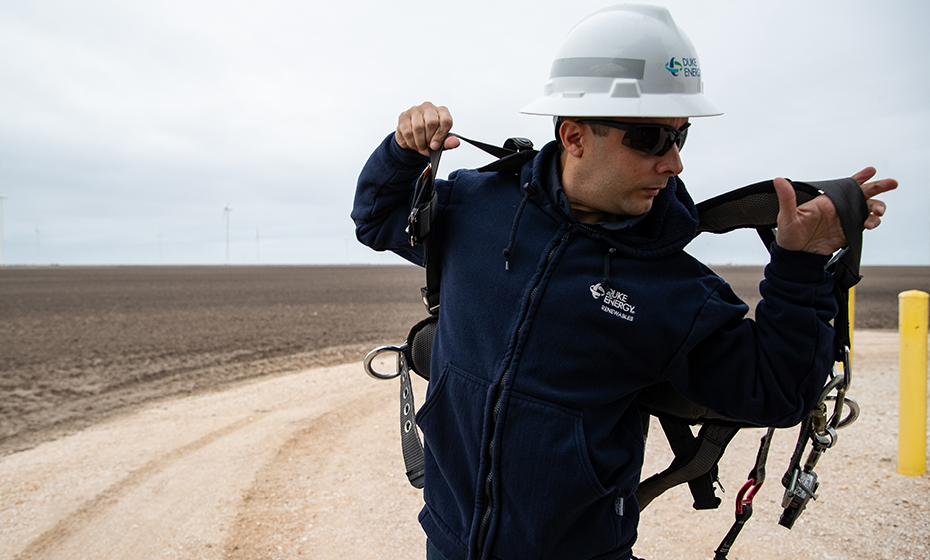 Tomas Mendez clips into his harness before climbing a wind turbine. The turbine is roughly 33 stories tall.

The first time he climbed, it was to figure out a way to prevent the oil cooling motors from failing. The solution was to install a soft-motor starter that would ease the rush of electrical current as the motor started, but he needed to make sure the new part would fit.

Mendez stood at the bottom of the tower and clipped into his safety harness with the turbines whirring overhead like the sound of an airplane. The harness weighs about 45 pounds and will catch him if he misses a step on the ladder that goes up to the nacelle, the powerhouse of the turbine attached to the blades.

“They give you certification where you practice how to wear the equipment,” Mendez said, “but what they don’t teach you is the fact that you’re going to be working 300 feet in the air.” 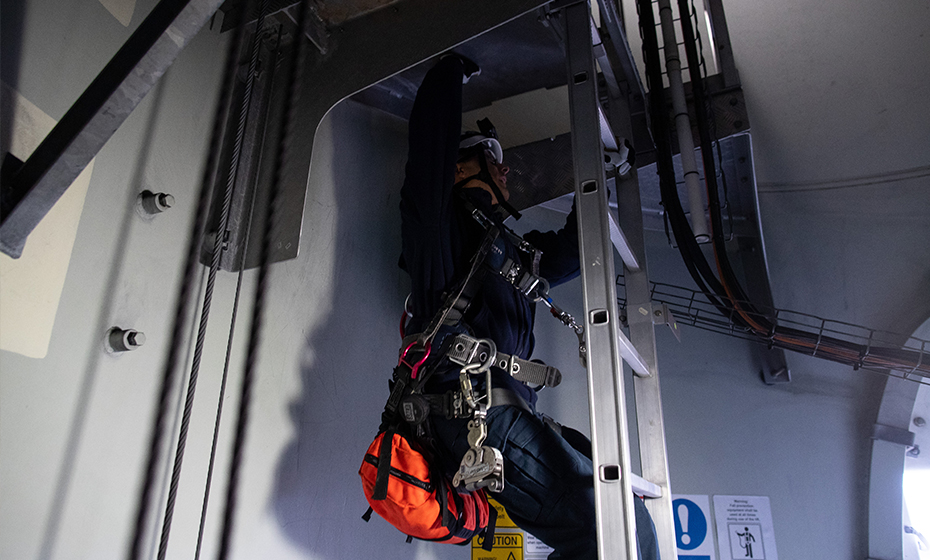 The ladder inside the turbine goes straight up to the nacelle, the powerhouse of the turbine. There are places to take breaks along the way, but most experienced climbers take about 20 minutes to climb without stopping.

He was sweaty, and he could feel the turbine sway like a boat rocking from side to side, which he didn’t expect. It took him almost an hour to get to the top. Today, he doesn’t take breaks and can climb to the top in less than 20 minutes.

The climb was worth it, though, to feel the breeze blowing and see the Gulf of Mexico in the distance and the tiny cars below.

Mendez is based in Cincinnati, but his team provides engineering support for all of Duke Energy Renewables’ solar and wind sites across the United States. In January alone, Mendez worked at renewable sites in Texas, Wyoming and North Carolina. The job requires a lot of travel – so much that his middle child, who’s 4, thought Mendez worked at the airport.

“He’s always impressed by the equipment and turbines and everything,” Mendez said, “but I have told him many times, I don’t work at the airport. I work at many sites.”

Before he took his current position in 2017, Mendez did wind construction engineering and helped build several wind farms including Los Vientos 3, 4 and 5 in Texas and Frontier in Oklahoma.

Between 2015 and 2017, Mendez helped construct 316 wind turbines to generate 710 megawatts of renewable energy. That’s enough to power about 140,000 homes at peak output. By 2020, Duke Energy plans to have 8,000 megawatts of renewable energy (the company currently has more than 6,400) as part of its commitment to diverse energy sources and reducing carbon emissions. That commitment to growth is what attracted Mendez to the renewables engineering team in 2015. 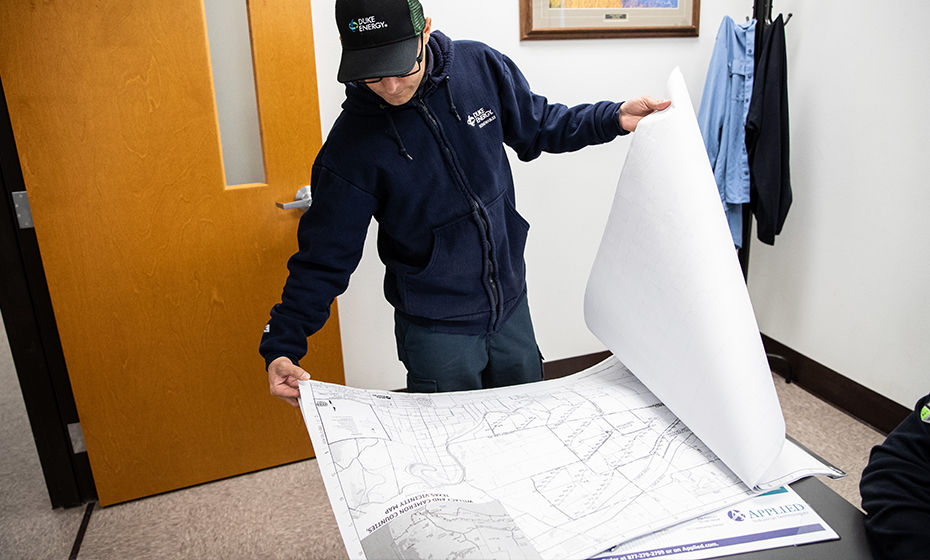 When he saw the job opening, he had already been with Duke Energy for seven years working on projects like keeping downtown Cincinnati’s underground grid running and engineering for the city’s smart grid initiatives.

“Renewables are new technology,” Mendez said, “and it’s the future of what we’re going to be doing.” 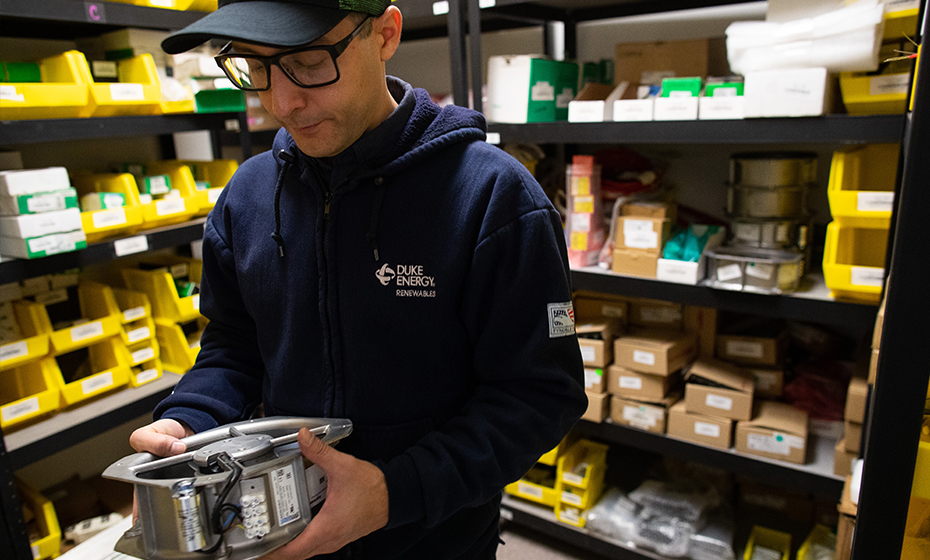 The engineers are responsible for making sure every piece of equipment, like this fan, is compatible with the rest of the system.

In between his work, the travel that comes with it and raising three children, Mendez finds time to help students in Cincinnati find career opportunities they will enjoy, too. Through the Society of Hispanic Professional Engineers, Mendez helps organize events that teach students about STEM careers and helps parents who don’t speak English understand what their kids need for college and what kind of financial assistance is available.

One of the events, Noche de Ciencias, a science night for middle schoolers, inspired one student to pursue electrical engineering. Now in college, that student will intern with Mendez’s team in the summer. 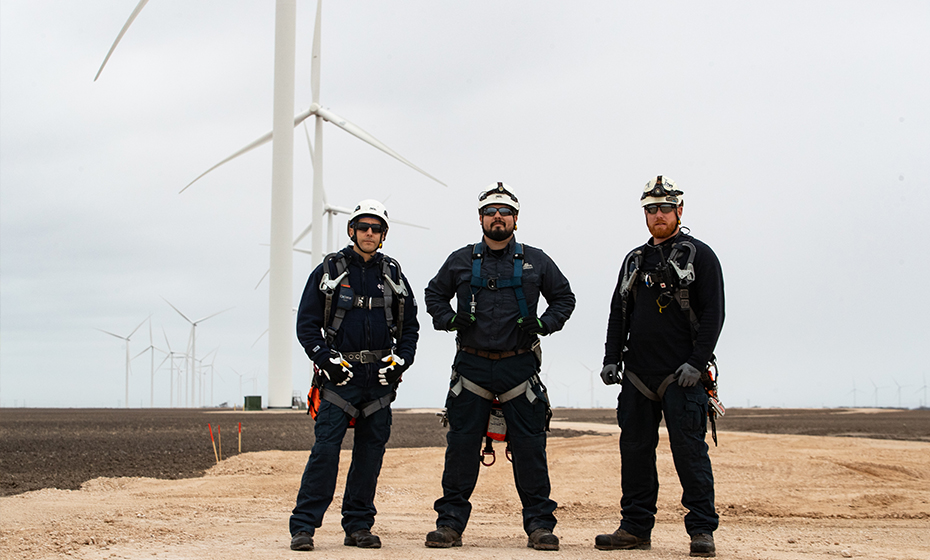 “You’re doing it for the love of it,” he said, “and then you realize that you are making an impact.”

If Mendez could tell them one thing about engineering, he’d say it’s a lot of fun.

“There are challenging things and moments that are a little dull – when you have to sit down in front of a computer all day,” he said. “Fortunately, that’s not our day-to-day. That’s our every once in a while, and then we get to go outside. I never thought I would be up in the air in a turbine trying to figure out things and make them work better.”