We're modernizing the electric grid for you

That’s why Duke Energy is investing $25 billion over the next 10 years in its service areas, the South and Midwest, to replace the aging power grid infrastructure (such as transmission lines, transformers, substations). The project will add thousands of jobs, generate billions of dollars in wages and provide an economic boost for Duke Energy's communities.

Duke Energy’s plans will, among other things, give customers the ability to control more of how they interact with the energy company. 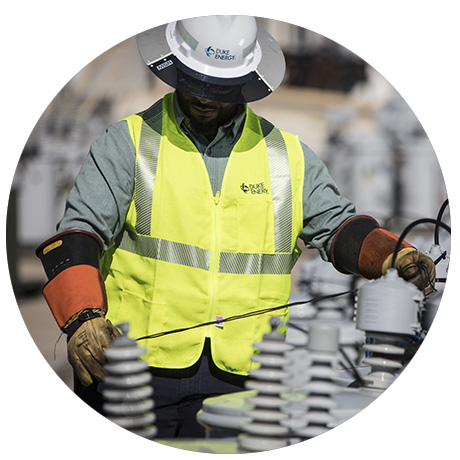 Trees add to the landscape's beauty and provide many other benefits but they are also a main cause of power outages. Duke Energy plans to move thousands of miles of the most susceptible overhead lines underground.

The improvements are expected to reduce the number of power outages over the next 10 years by 50 percent.

That brings us back to today

Crews have already been installing smart meters at residences and businesses. You’ll see other work, too, updating substations and transmission lines, for example.

What Duke Energy has planned

Thousands of miles of hard-to-access overhead power lines will be moved underground. This will significantly reduce outages and interruptions and can speed restoration.

Transformers will get technology to prevent animal interference and lightning strikes, deteriorating cable will be replaced, physical and cyber security enhancements will protect against hackers and occurrences like animal intrusions and vandalism. This will help prevent outages, especially during storms, and provide faster restoration when outages occur.