Duncan Brewer remembers his father as a hardworking man who seemed to be in pretty good physical shape.

Despite this, Harry Brewer died from sudden cardiac arrest in February 1975 at age 55.

Today, his legacy lives on through his two sons, Duncan and Ed Brewer, both of whom work for Duke Energy.

Duncan and Ed, who were 18 and 13, respectively, at the time of their father’s death, were visiting their paternal grandmother at her home in rural Chatham County, N.C., with their father when he collapsed. As Ed scrambled to call the ambulance (there was no 911 system at that time), Duncan attempted to perform CPR on his father.

Harry Brewer had performed a variety of tasks on the coal crew at the Roxboro Plant in Semora, N.C., as an employee of legacy company Carolina Power & Light. He also maintained the family’s farm.

“He did physical labor at the plant and when he was at home, he was working on the farm,” Duncan Brewer said, “so he had a pretty active lifestyle.”

Unfortunately, Harry Brewer wasn’t the only family member who would die from a heart attack. Ed’s father-in-law, James “PawPaw” Meacham, died in February 1989 at age 56. He was a smoker who had quit cold turkey in 1980 at the urging of his daughter. 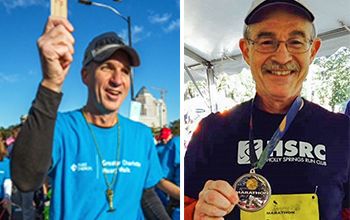 From left, Ed and Duncan Brewer

Both of these men died in the month of February, which also happens to be American Heart Month. The Center for Disease Control (CDC) says heart disease is the leading cause of death for men and women.

With an older workforce across the nation, the prevalence of cardiovascular disease is increasing.

So February is a great time to commit to a healthy lifestyle and make small changes that can lead to a lifetime of heart health.

Although the month is filled with somber reflection for Duncan and Ed, the brothers have taken away some heart health tips from their heartbreak.

Duncan tries to stay active and has run several marathons. He said the exercise is easy for him but admits that he has had some struggles maintaining a healthy diet. He took advantage of one of the programs that the company provides, Weight Watchers at Work, and it “helped me better maintain a healthy weight.”

Ed has served as a Duke Energy team lead for the Greater Charlotte Heart Walk and enjoys using his Apple Watch to compete in some of the company’s many wellness challenges.

“Life is precious and family is very special,” Ed Brewer said, “and you want to be with those family members as long as you can. So I’ve tried pretty hard to stay fit and stay active and watch my diet.”

His oldest son, Zach, was four when his grandfather died in 1989. Zach is now a cardiothoracic surgeon at Stanford University Hospital. Ed does not think it is a coincidence that Zach chose the profession he did – “he still misses his PawPaw.”

The CDC recommends taking the following actions to maintain a healthy heart: