They bike across U.S. to support trees

Tour des Trees bikers traversed 600 miles across NC and SC, leaving a trail of trees along the way

Urban trees bring something natural to nature-starved cities, but those trees have hard lives.

People dig up the soil around the trees and surround them with concrete and asphalt. And then the tall buildings deny them the sunlight they need. Even though trees provide health benefits for people and add to the life of the city, they are threatened. 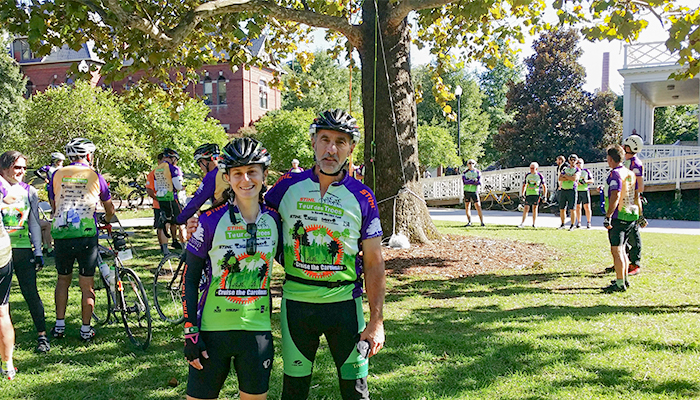 That’s why Tom Ordway gets on his bicycle and rides 600 miles every year in the annual STIHL Tour des Trees. His goal and the tour's goal is to promote the importance of urban trees.

Ordway, a Duke Energy forester in Noblesville, Ind., and Emily Faas, a fossil chemistry tech at Duke Energy’s Rogers Energy Complex in Mooresboro, N.C., were among 100 riders from around the country who rode through the Carolinas in the 24th annual STIHL Tour des Trees in mid-October. This was Faas’ first ride; Ordway has pedaled in the tour every year since 2004.

“This is not a race,” Ordway said. “There’s nothing competitive about it. It’s designed to educate people, especially children.”

The money raised is put into research. One way the funds are used is to improve methods for growing strong, healthy, urban trees. Growing trees near paved areas is a tremendous challenge. “Researchers partially funded by the TREE Fund (Tree Research and Education Endowment) have made great strides in developing soil mixtures and paving technology that allow [urban] trees to grow healthy root systems,” according to the Tour des Trees website.

The tour raises money for the TREE Fund and is the organization’s largest fundraiser. Each rider commits to raising at least $3,500. So far, this year’s ride, sponsored by Duke Energy and other companies, has raised more than $390,000. Donations are still being accepted.

The money is also used to develop tools and methods to identify hazardous trees, which “have the greatest potential to cause property damage, electrical outages,” the website said.

For the safety of cyclists, the ride goes mostly through less-traveled roads. But because the purpose of the event is to raise money and awareness, the tour also winds its way through major media markets (Charlotte, Greensboro, Raleigh) to get the message out. 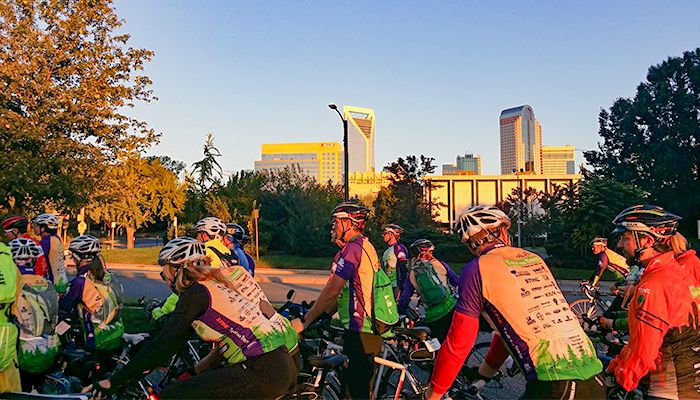 Like modern-day Johnny Appleseeds, the riders plant trees everywhere they go. And they plant in front of an audience.

One of the cyclists dressed (and biked) in a crazy professor’s costume. The fifth-graders at Stokes County’s Walnut Cove Elementary School (did organizers purposely pick a school named for a tree?) loved the “professor” and the pep rally he led.

When you plant a tree, Ordway said, you’re investing in the future: “You’re planting for the grandkids you don’t have yet.” Ordway said he is concerned about that future.

Faas, whose husband rode the tour two years ago, said she was riding for future generations. She has three sons (ages 4, 2 and 9 months) and wants them to be able to enjoy trees.

“Trees,” Ordway said, “are supposed to last for hundreds of years.”