These scientists have a lake for an office

From an airboat, Brett Hartis and Eryn Molloy show us what it’s like to be a Duke Energy aquatic plant scientist slowing the spread of invasive plants

With a souped-up fish finder and an airboat, Brett Hartis and Eryn Molloy spend the summer on the Catawba and Wateree rivers looking for plants that could cause problems. They’re scientists for Duke Energy’s aquatic plant management program, and the sooner they find plants that could crowd waterways, the better it is for those who depend on the water. 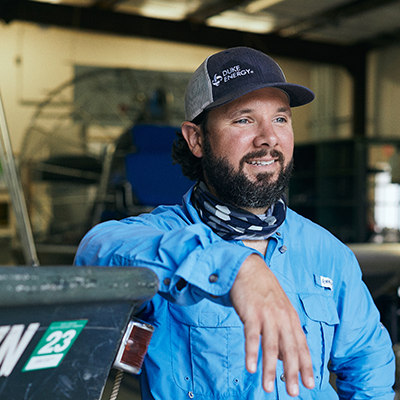 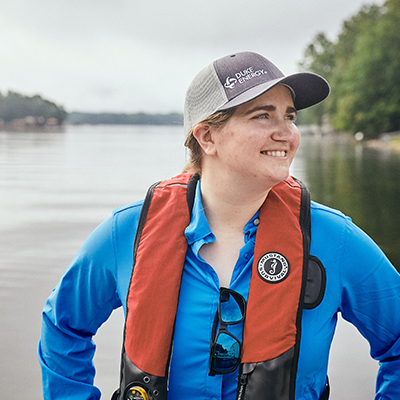 From June to October, they survey nearly 1,800 miles of shoreline from Lake James in western North Carolina to Lake Wateree in South Carolina for invasive plant species – like hydrilla – that spread quickly and stifle plants. If it spreads enough, the growth can affect water flow to power plants, restrict access to boat ramps and swim beaches, threaten our drinking water and harm wildlife habitat.

The key to combatting invasive species, Hartis said, is early detection. That’s why they need the airboat. It allows them to access shallow, backwater parts of the river. They inspect areas that many never see, identify new growth early and work with state and local agencies to develop a management plan and educate property owners.

Hartis and Molloy took over Duke Energy’s Instagram (@duke_energy) to show us what a day is like for a scientist on Mountain Island Lake north of Charlotte. 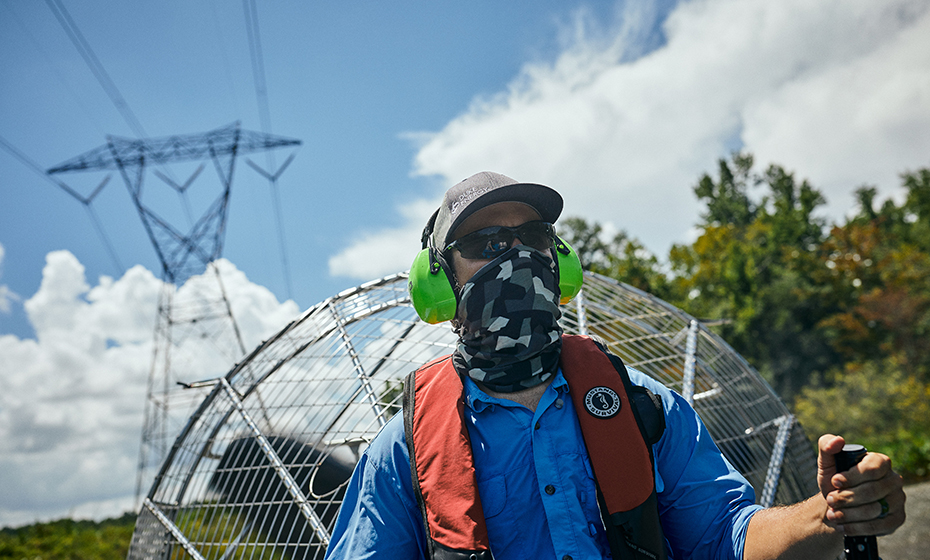 After prepping the boat, they head to the water and start searching. Hartis drives and Molloy points out little purple flowers and leaf patterns to identify native species like water willow that provide shelter for young fish and food for pollinators. In between the beneficial, native plants, they’re looking for signs of invasive species. What they don’t spot, technology catches with a sonar unit that finds submerged plants and records their location.

Hartis has managed aquatic plant programs for utilities for five years, and Molloy joined Duke Energy’s program after graduating from North Carolina State University in 2019. Both have advanced degrees from the university – Hartis a Ph.D. and Molloy a master’s degree – in fisheries, wildlife, and conservation biology specializing in aquatic invasive species.

In addition to inspecting the Duke Energy reservoirs on the Catawba-Wateree each year per federal requirements, the scientists monitor all 40 of the company’s reservoirs in the Carolinas. If a landowner’s boat ramp is suddenly covered in weeds or an algal bloom pops up at a park, Hartis and Molloy check it out. They respond to hundreds of requests each year.

“We’re the ones people call when they see something weird,” he said. 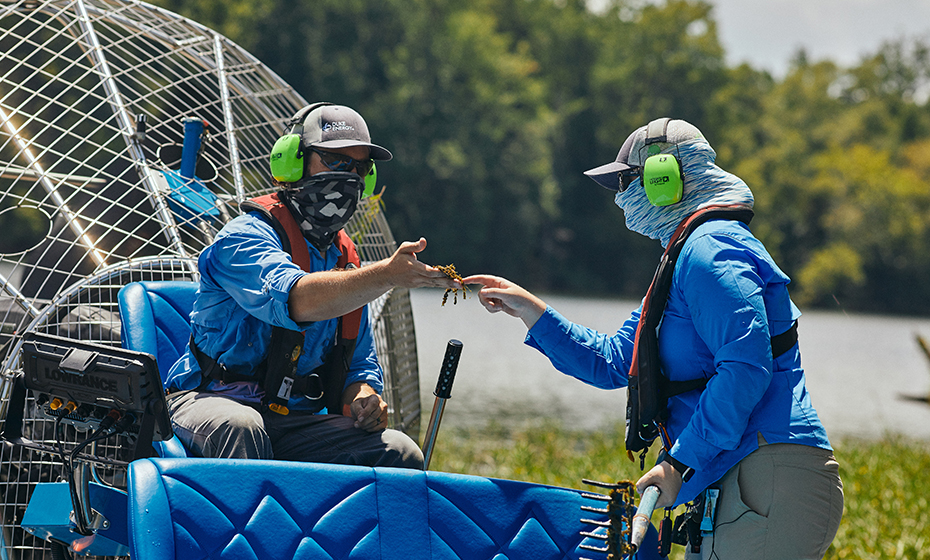 Sometimes, he said, people think they’re out to get rid of all the aquatic plants, but that’s not the case. Their goal is to restore a balanced ecosystem that supports a variety of plant and animal species.

Because these reservoirs are man-made and warmed by the Southeast’s plentiful sunlight, they are the perfect places for invasive species to take hold.

“When an invasive comes in,” Hartis said, “this is an open playing field for it to take off and run amuck.” 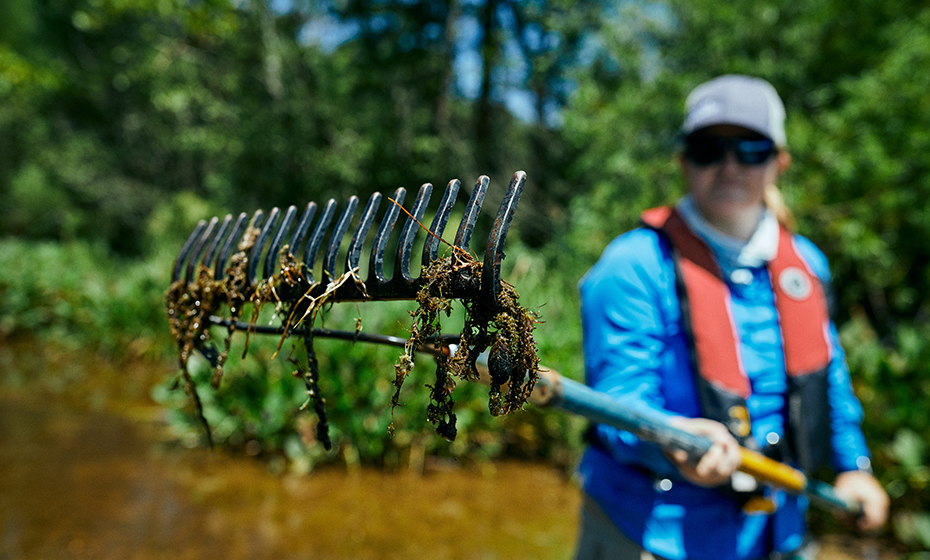 One of the most prolific invasive aquatic plants is hydrilla. Hartis said it’s like kudzu, a well-known, land-based invasive species that spread across the Southeast. Hydrilla grows quickly and has few predators.

Millions of dollars are spent annually across the United States to slow its spread.

Since hydrilla appeared in Duke Energy reservoirs in the 1990s, the company has worked with management agencies to eradicate the plant by introducing predators like sterile grass carp, applying herbicides and removing the vines by hand. The least expensive and easiest way to stop hydrilla, though, is to prevent it from taking hold – that’s why they spend much of their time educating lake-front property owners about invasive species. 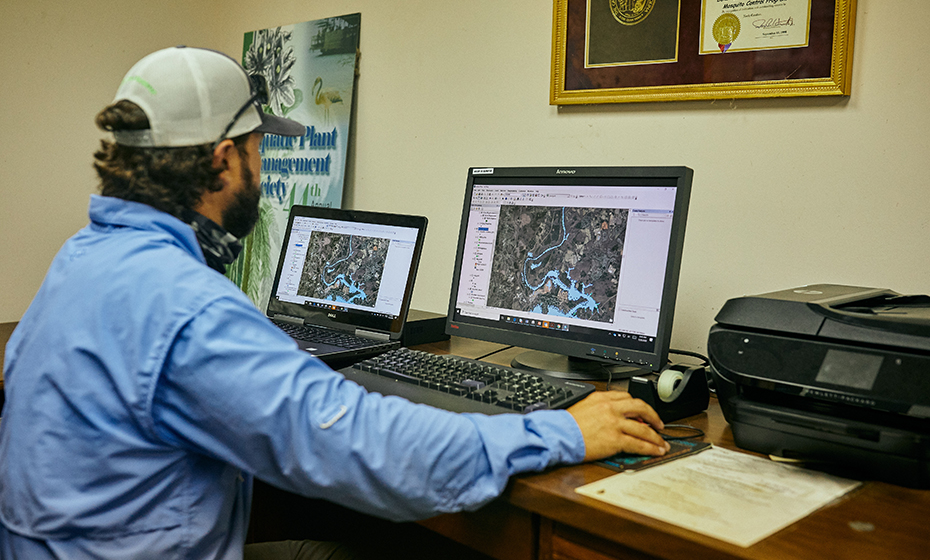 After surveying a reservoir, the scientists return to the office and look at the data they collected. The boat’s sonar unit works like most fish finders that anglers use – it’s continuously sending a sound wave toward the lake floor, and when it hits a fish, rock or patch of vegetation, it bounces back to the unit and records the depth. By using this technology, they can record hundreds of thousands of data points each trip and get a better idea of how widespread underwater plants are across the lake.

“We get a better overall view of just how big the issue might be,” Hartis said. “If we find these things at 1, 2, 5 or 10 acres, we can keep it from being hundreds or thousands of acres.” 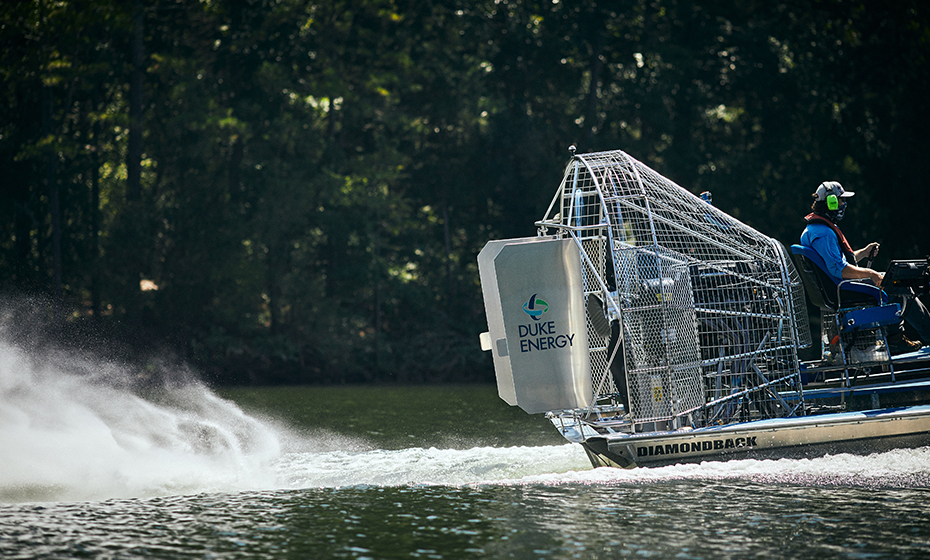 Neither scientist thought they’d work for a utility when they decided to study fisheries, but they both said they recognize the value they provide in working with state and local partners to develop management plans that protect natural resources and benefit everyone. Managing invasive species, Hartis said, touches everything from the environment to economics.

“Things you might not think about,” Hartis said. “Yeah, it might block a boat ramp, but if it takes hold in a community that thrives on the lake economy, you can imagine what that would mean indirectly for the entire community if these species aren’t managed.”

Molloy said she loves being able to support that effort, too.

“And,” she said, “I love that I get to call these lakes my office.” 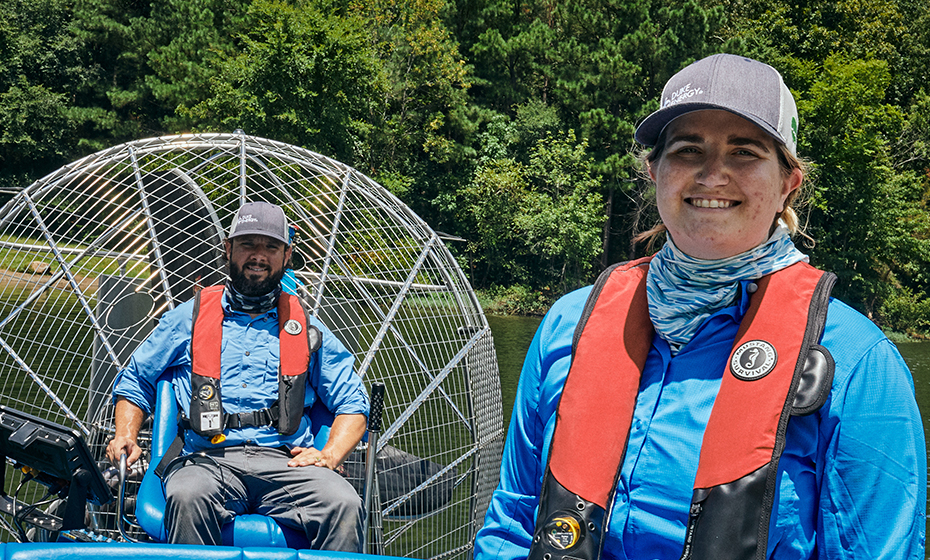