Their green house is an emerald in the woods

Early in their marriage, Bill Hicks promised his wife that he’d buy her a new house. Some day.

In the four decades following that vow, the couple raised their two children in a one-story 1950s brick veneer house with small rooms, a choppy floor plan and not enough sunlight. While it was sturdy and serviceable, they envisioned what their new house might look like.

Many years later, their environmentally focused son, Lloyd, told them it needed to be green. And when the couple bought a piece of land in rural Troutman, N.C., north of Charlotte, he sketched out a multitude of ways to make a new house energy efficient and environmentally friendly.

“On a cold day, when the sun is shining, the house gets to be 74 without the heat pump turning on,” Bill Hicks said. “We have hot biscuits for every supper, and our power bill averages about $112 a month.” 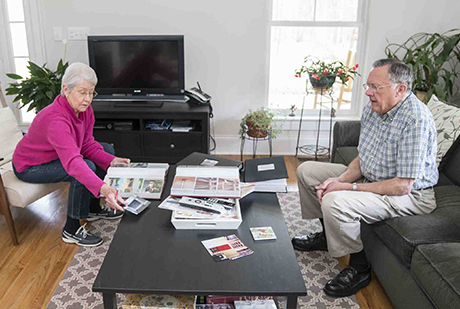 Ellar and Bill Hicks shows off one of several albums of photos the couple made and collected during the construction process.

The couple built their home in 2011, and it became one of the first in the region to carry a National Green Building Standard’s Emerald rating. At the time, their builder, Kelly-McArdle, became one of just 400 in the U.S. to achieve the Department of Energy’s Builders Challenge. Getting that rating comes with mandates in everything from site development to water conservation. Builders use recycled, locally sourced materials such as bricks, and install features like low-flow water faucets. The houses must also have high indoor air quality and use at least 30 percent less energy than a standard new home built to code.

Their first good environmental deed came when they cleaned up the land, which had become a dumping ground for appliances, tires and trash. They took their son’s sketches to an architect who designed their home to comply with building codes.

Charlotte builder Danny Kelly, co-owner of Kelly-McArdle, said he’s encouraged when people want green homes. He says that while it may cost a little more upfront, the long-term  benefits—lower utility bills and being earth-friendly—make it worthwhile. 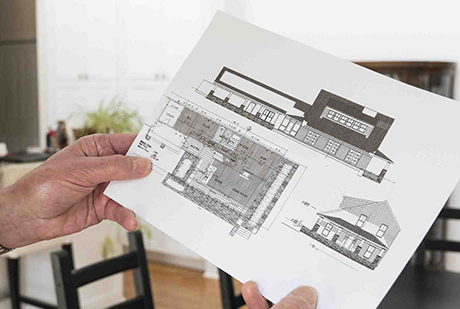 While high energy efficiency has often been limited to custom homes such as the Hickses’, some builders, from Habitat for Humanity to upscale developments, are incorporating features to achieve that.

Kelly said he wishes more people would make this a priority. Many who build or renovate homes, he said, get so engrossed with decisions about everything from appliances to countertops to colors that they overlook energy efficiency.

“You want to build a house that lasts. You want it to be tighter and more energy efficient,” Kelly said. “We try to educate them through the process.”

The house his company built for the Hickses came after a lot of planning.

The Hickses and their architect used a Boy Scout compass to figure out where the sun would be brightest in winter so they could angle the house to capture its warming rays. Conversely, they figured out how to keep it shaded and naturally cool in the summer.

The placement of windows and three sets of French doors maximizes winter sunlight. A partially tiled wall retains the sun’s heat and keeps the house warm on cold days. An overhang keeps summer sunshine from heating the house. 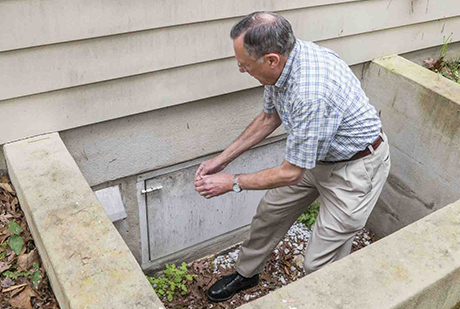 Bill Hicks shows the entrance to a crawl space beneath the house.

Thick walls help insulate the house, an Energy Recovery Ventilation system brings fresh air in and shoos old air out. They designed the gutters to catch the roof’s water during rain, then pipe it down to their raised-bed gardens.

The house also has the light, open floor plan that Ellar Hicks always wished for. The couple spends most of their time on the main floor, which includes their bedroom. A partial second story has two bedrooms and a bath for company, including their children.

They wanted the home to look like an old-fashioned farmhouse outside. Inside, high ceilings, gleaming hardwood floors and light shades of white and gray add a modern, airy feel.

Bill Hicks, who spent his career as an engineer at Marshall Steam Station, says he was OK with their old home, but pleased with the way things turned out in their new one. Plus, he had that promise to fulfill to his wife.

He said his energy-efficient home also helps his former employer: “I figure I’m doing my part on less power consumption and avoiding Duke’s having to build more generation.”

Ellar Hicks especially loves her kitchen, where she makes the biscuits her husband says made him fall in love with her so many years ago.

“Most people downsize when they retire,” Ellar Hicks said. “We just built what we wanted, and it’s something good.”

Bill and Ellar Hicks built their dream house after his retirement from Duke Energy. Their son helped them turn it into a green home, with plenty of natural light, perched on land shared with wildlife.