This crew in Cleveland County, NC, is building a solar site that can provide more than 12,000 homes with carbon-free energy

Michael McDonald wakes up every day at 4:30 a.m. to make it to his construction site by 6. As one of the foremen at Duke Energy’s Broad River Solar project in Cleveland County, N.C., he supports the site superintendent by making sure the 130-person team has the equipment and tools they need and leading the crews who install solar panels.

The 50-megawatt solar installation can power 12,500 homes, and it’s the latest of many that McDonald has built since starting his career in solar construction in 2010.

Solar has grown from a tenth of a percent of the nation’s electric generation in 2010 to 3 percent today. The industry was in its infancy then, but McDonald said, we’re still in the beginning. The United States has enough solar installations to power more than 18.6 million homes. Projections show that will triple in the next 10 years.

“There are a lot of career opportunities in this field,” he said. “Everywhere you look, you see a solar field. The growth of this industry is at the beginning, so right now is a good time to get in.”

Solar installer is one of the nation’s fastest growing careers as homeowners, companies and utilities generate more renewable energy. Duke Energy has more than 10,000 megawatts of wind and solar – enough to power more than 2.4 million homes and businesses. By 2050, the company expects to reach net-zero carbon emissions, and renewables will be its largest generation source supported by an upgraded grid, natural gas and nuclear power to keep electricity affordable and reliable.

Here’s a look at how McDonald is helping build renewable energy. 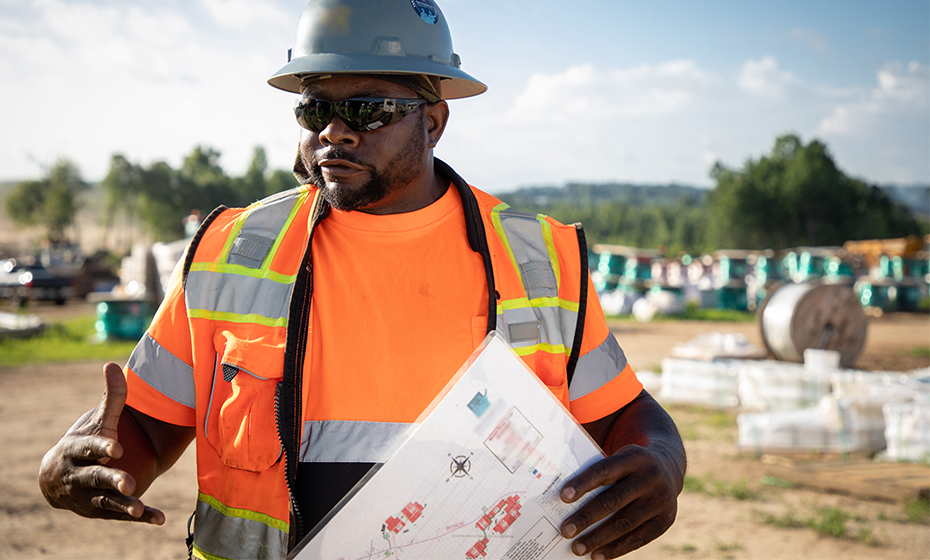 By 7 a.m. hundreds of vehicles have rolled into the construction site’s gravel lot beside portable offices. Dozens of workers in yellow safety gear and hard hats meet with their work groups as their foreman gives them the day’s assignments and safety briefings.

McDonald is responsible for about 30 of the workers who will install panels or unload and organize equipment deliveries. The other workers will focus on other stages of the project like clearing land, driving steel beams or stringing electrical wiring.

Like building a house, each phase of construction must be complete before moving on to the next. 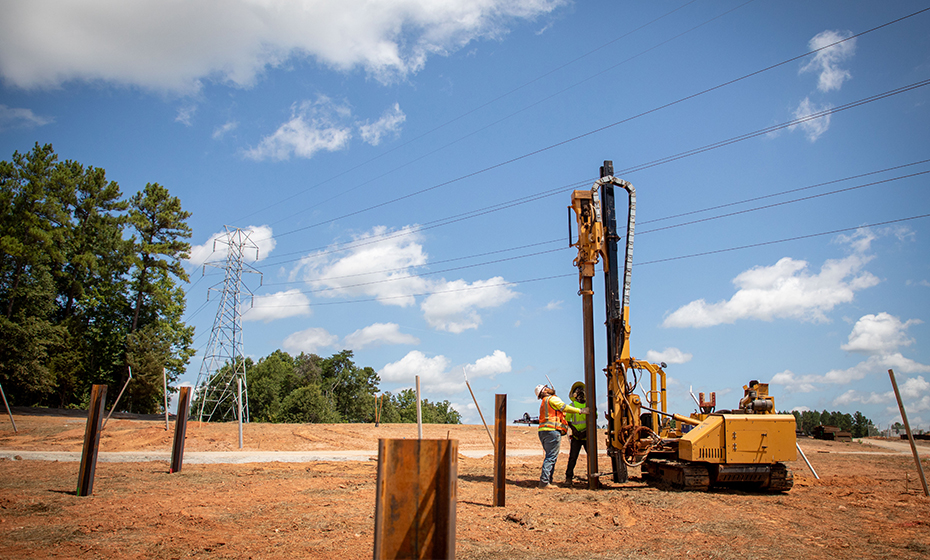 Broad River Solar has about 170,000 solar panels on 500 acres near Duke Energy’s Rogers Energy Complex, where retired coal plants were replaced with natural gas plants to reduce carbon dioxide emissions by about 40 percent per megawatt-hour.

Duke Energy’s solar sites have a roughly 35-year lifespan. When it’s time to decommission the site, Duke Energy will restore the site to its original condition and recycle as much as 90 percent of the equipment.

For construction, the site is separated into 18 sections based on the hilly terrain. When trucks deliver equipment, McDonald’s team unloads them and organizes them so each section has the correct equipment for each phase of construction. The laydown yard has shipping containers full of supplies, from metal components that can fit in the palm of your hand to solar panel mounts that weigh 100 pounds.

Once a section’s land is cleared and the equipment is staged, the team begins installing steel beams, called piles, in a grid. 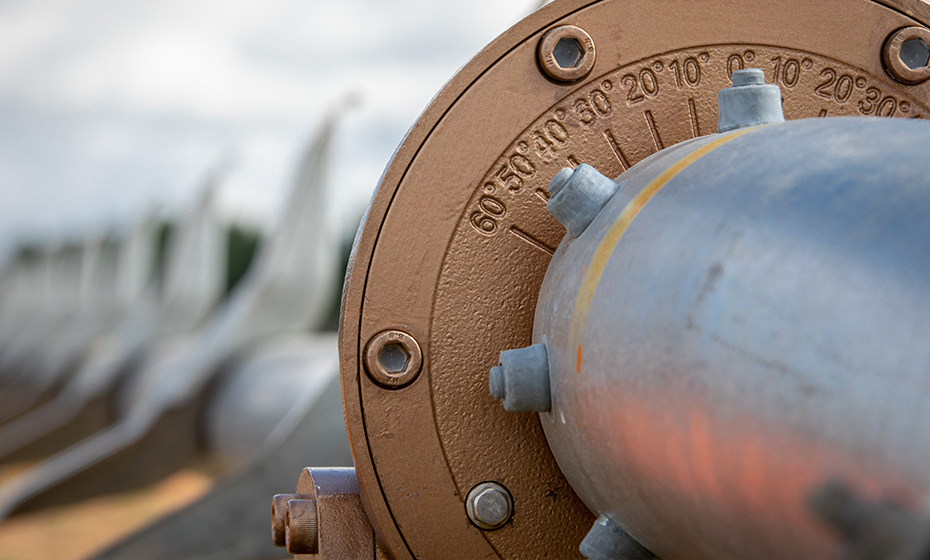 Because the land at Broad River is not flat, the crew used equipment that allowed them to construct the site without leveling the land completely. This speeds the process and is less invasive.

Using a pile driver, a two-person crew attaches the steel beam and drives it into the ground. When they’ve confirmed that each beam is installed correctly, another crew will begin attaching the panels’ mounting system, called racking, to the beams.

At Broad River, unlike many early solar sites, the team installed mounts and technology that allows the solar panels to tilt with the sun.

“It’s rotating to capture every bit of the sun,” McDonald said, “which helps produce more power.” 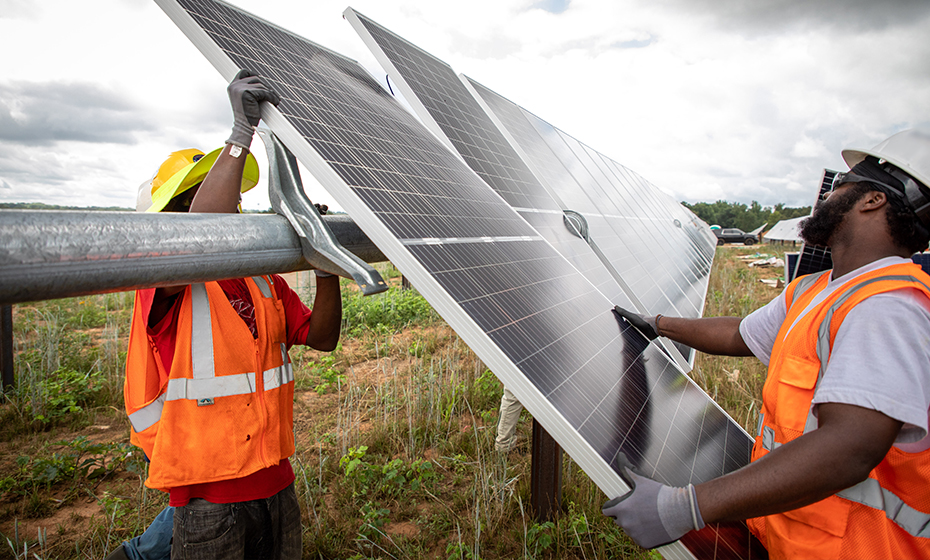 This is one of the technology advancements that have made solar more efficient since its beginning. The cost of solar has fallen 70 percent in the last 10 years, and panels are better at converting light to electricity, too.

The panels at Broad River weigh about 50 pounds each. A team of four works in pairs to lift the panels from their cardboard boxes and place them on brackets attached to the racking. They work quickly to complete a row, which has about 84 panels, but they also have to make sure they install them so the positive and negative terminals are aligned to work once wiring is complete.

Most of the people working in solar construction are hired locally, so they have to be trained. That’s part of McDonald’s job, too. When he started, his job was placing panels, and he said he likes passing on what he’s learned. It helps the project, McDonald said, and he wants workers to advance in their careers. 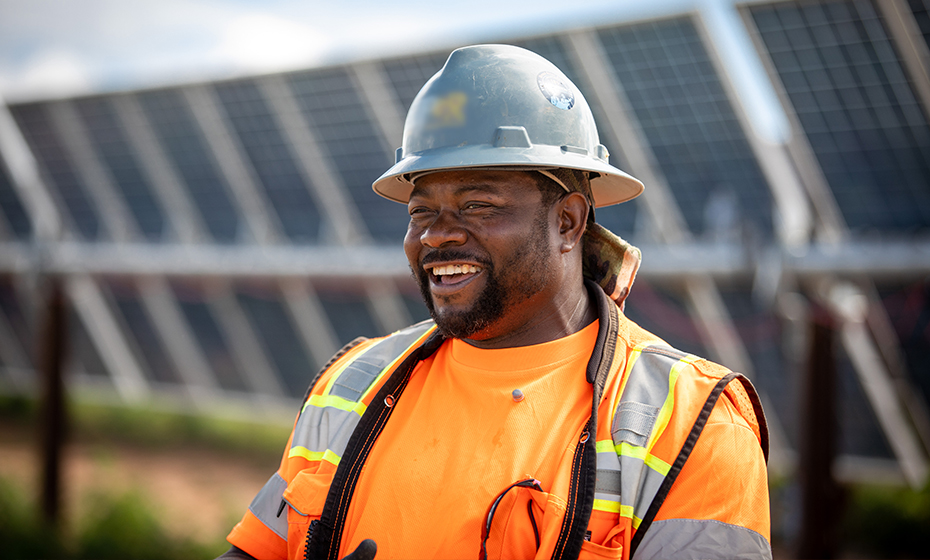 At the start of his career, he said it was just a job, but he has come to love traveling around the state to build the renewable energy sites that will power the future.

“I love getting up every morning coming into work,” McDonald said. “It's very uplifting to know that you are leading the way in producing clean energy for not just local people but for the world.”