Carving out a woodworking niche

Mike Hughes creates works of art, one piece at a time

The woodworking talents of Mike Hughes are proof positive that sometimes the apple really does fall far from the tree.

Hughes, Duke Energy's vice president of community relations in North Carolina, says his father was “an amazing man, but no handyman at all.” That fact makes the amazing work Hughes creates in the 250-square- foot shop behind his house even more remarkable. 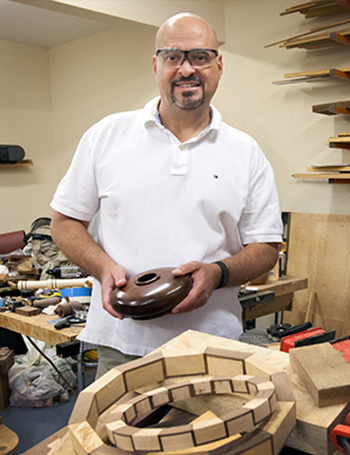 And his creations are legendary, not only in his own Raleigh home, where he has built nearly every piece of furniture, but in the halls of the North Carolina Regional Headquarters, where he has garnered numerous fans during his 23-year career at the company.

Many employees wear his bracelets and necklaces, but he’s also well-known for other fine pieces, such as bowls and vases of all shapes and sizes.

"His handiwork has been prized by many Duke Energy employees over the years,” said Edie Webb, corporate communications account manager, who has seven Hughes-made bracelets and has given even more as gifts. “Mike's craftsmanship is superb and so artistic.”

Debbie Giachini, a contractor in creative services and an artist herself, agrees. “I have 35 of his bracelets, and no two are alike. The wood he uses is gorgeous and his designs are simple and clean. I love them,” she said. When asked how much Hughes’ bracelets cost, Giachini quickly replies, “Not enough,” referring to the reasonable prices he charges. In reality, bracelets range from $20-$40 each, depending on the wood used. 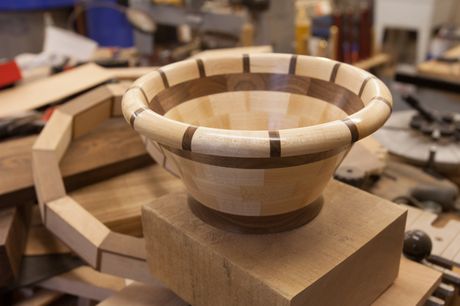 Hughes’ journey to expert craftsman began when he was a cub reporter in eastern North Carolina during his first job fresh out of college. “I had no money and no furniture. So for me, necessity really was the mother of invention,” he said.

Inspired by his brother, who also enjoyed making things with his hands, Hughes started spending more and more time with tools and experimenting with wood projects.

Through trial and error, he began to make all sorts of pieces, from ice cream scoops and wine stoppers to eventually book cases, beds, tables and china cabinets.

And while some may relieve stress with sports or social activities, for Hughes it often means retreating to his workshop.

“I’ve got a very forgiving wife who lets me stay down there till midnight when I’ve had a tough day or week,” he said. “She even lets me put some of the results in the house.”