Duke Energy’s Oconee Nuclear Station has a new dog. “Spot” can sit, lie down and roll over. Unlike your average Rover, Spot is also trained to perform inspections of hard-to-access areas at the plant on Lake Keowee near Seneca, S.C.

Spot, purchased in 2021, is the newest inspector gadget to join Oconee and the company’s growing pack of robotic technology. Duke Energy’s nuclear plants are operating even more reliably and efficiently because employees are using new technology while producing carbon-free energy 24 hours a day. Nuclear power is a key component as Duke Energy works toward achieving net-zero carbon emissions by 2050. 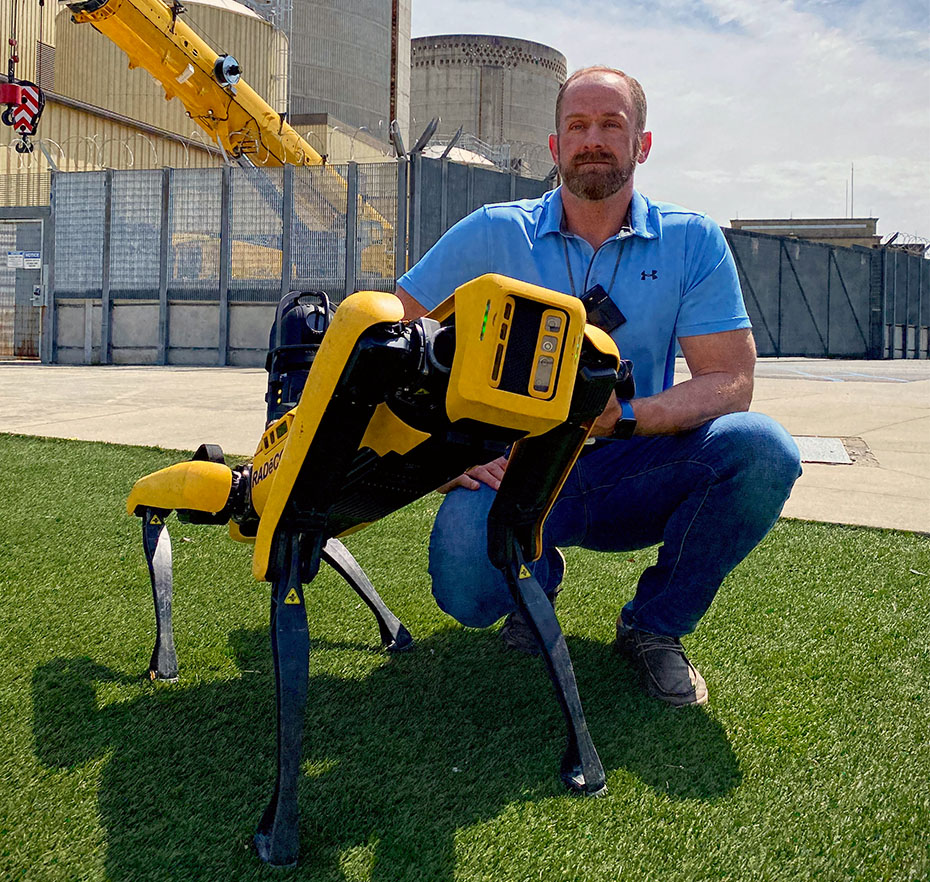 If there's an object in its path, it will figure out how to move around it without a controller’s manipulation. Typically, the robot is led by a technician with a remote control, similar to a gaming device equipped with a camera and audio controls.

"It's extremely easy to operate, even up and down stairs," Meldrum said. "It has a mounted high-definition camera and has the strength and balancing ability to carry other payloads, such as monitoring equipment and laser scanners."

At Oconee, Spot’s abilities allow employees to perform inspections safely. Spot can enter a nuclear containment building while the unit is online producing electricity for nearly 2 million customers. The site, which has three units, is also considering how Spot can help inspect confined spaces and underground piping. 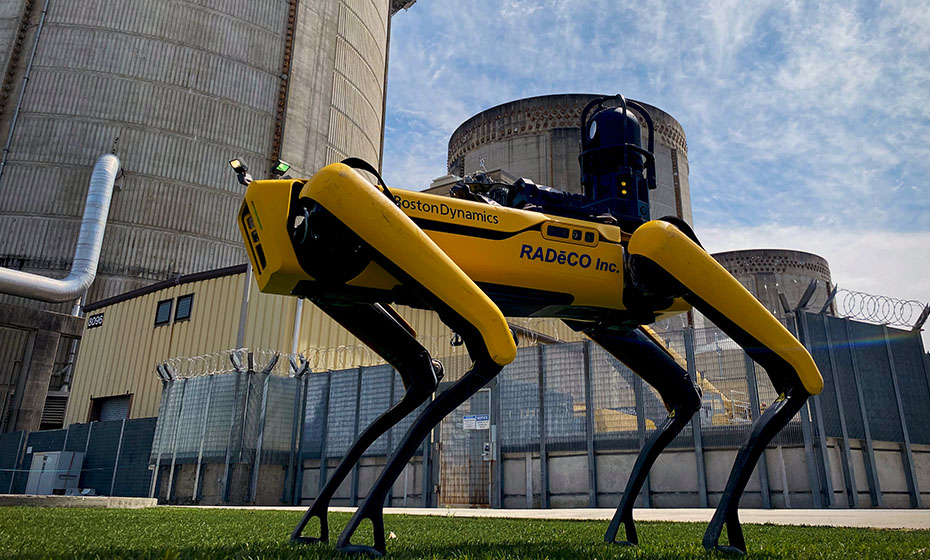 Spot is the first of its kind among Duke Energy’s six nuclear plants, but he’s one of several robotic technologies that Duke Energy Nuclear is using to develop modern tools and innovative strategies to support operations.

In Duke Energy’s Emerging Technologies organization, Spot’s “cousins” are being evaluated for a variety of cases across the company, including work at electrical substations.

“Our team has two Spot robots,” said Duke Energy Technology Development Manager Rodney James. “At our Emerging Technologies facility in Mt. Holly, N.C., our team is looking at Spot’s capabilities with a 360-degree camera, as well as an infrared camera that has LiDAR detection (remote sensing that uses laser pulses to generate 3D surface information).

At a substation, for instance, the robot could enter the area to manipulate controls, James said. 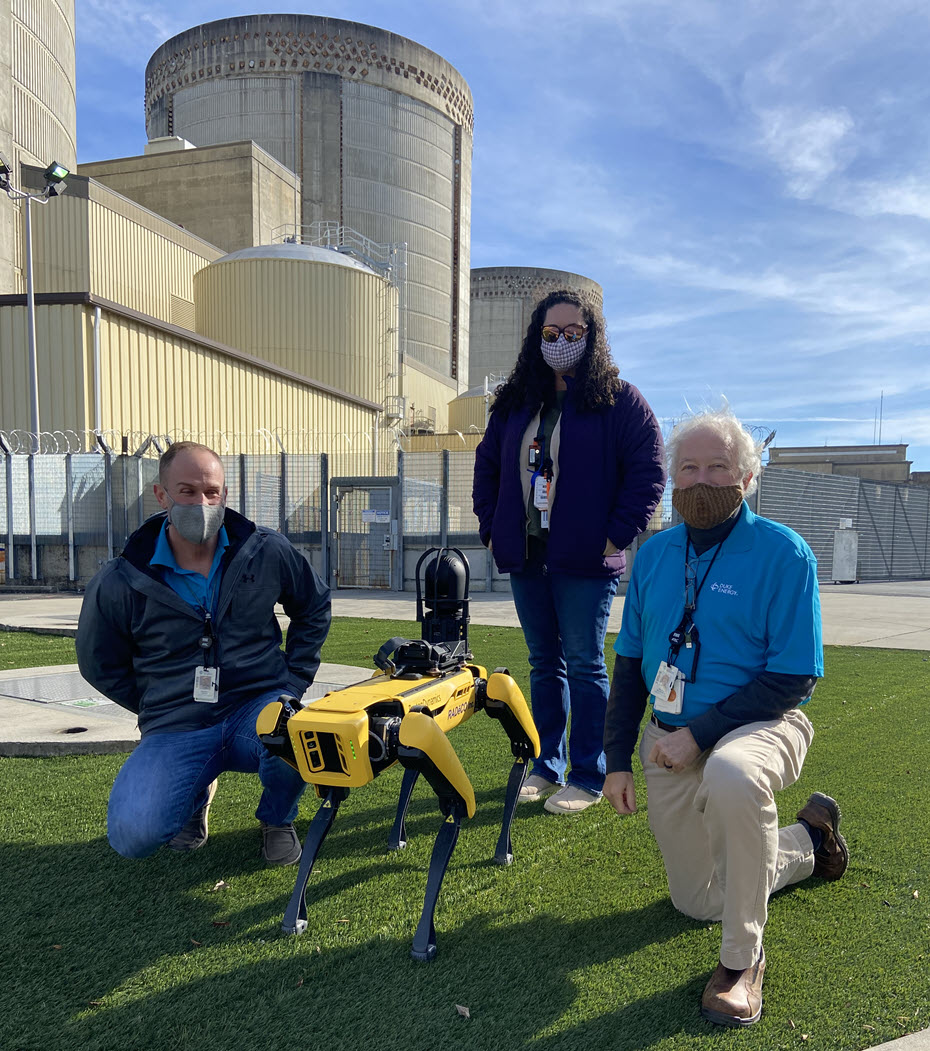 “Whether at a substation or a nuclear plant, this technology is about allowing our teammates to work even safer,” he said. “It lets the robot assume the risk and puts our employees in a safe zone while operating the controls.”

James and the Emerging Technologies organization, 11 teammates across the Duke Energy service area, research and develop new and innovative technologies that can solve problems for a variety of business units across the company.

“We have been testing these robots and demonstrating them to interested groups, like nuclear,” James said. “We allow teams to interface with the robot to test out capabilities and work with them to figure out their team’s needs. This show-and-tell approach allows them to figure out if Spot (or another technology) is worth their investment, and we’re here to help them along the way.”

“Innovation is wide and vast – we are continuously looking across the industry to bring solutions to the company based on what makes sense,” James said. “Now that we have our hands on some awesome technology, we can do so many different things.”

Spot's best trick? When it's time to replace his batteries, he really does roll over for a belly rub. The battery pack is located on his undercarriage.