Soaring with eagles to protect their habitat 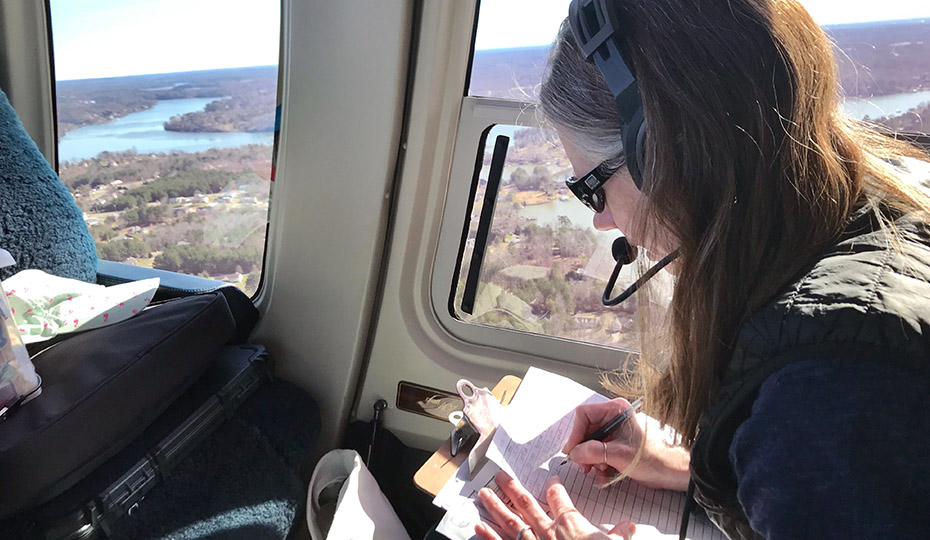 Sporer can be excused for back-seat driving – protecting bald eagles is one of the most important parts of her job. She quickly took notes, sharing her discovery with the others on board: “One chick, one egg, one adult.”

From up front, environmental scientist Will Ricks logged coordinates, which will be included in the report Duke Energy produces for state and federal wildlife officials.

The helicopter peeled off within 30 seconds. “Mama bird was getting agitated, we don’t want her unhappy,” Sporer said. When the eagle starts ruffling wings and glaring at her visitors from one eye and then the other, it’s time to move on.

As certified wildlife biologists, Ricks and Sporer are permitted to observe eagles inside the 1,000-foot aerial buffer. They were conducting Duke Energy’s annual eagle survey, which began in 2016 when the company renewed its federal license for 13 hydroelectric stations in the Catawba-Wateree River basin.

Birdwatching is not an activity most people associate with late winter, but that’s prime time for Duke Energy’s team of environmental scientists. Eagles are easiest to spot when they’re nesting and before deciduous trees begin to leaf out.

No longer endangered, but protected 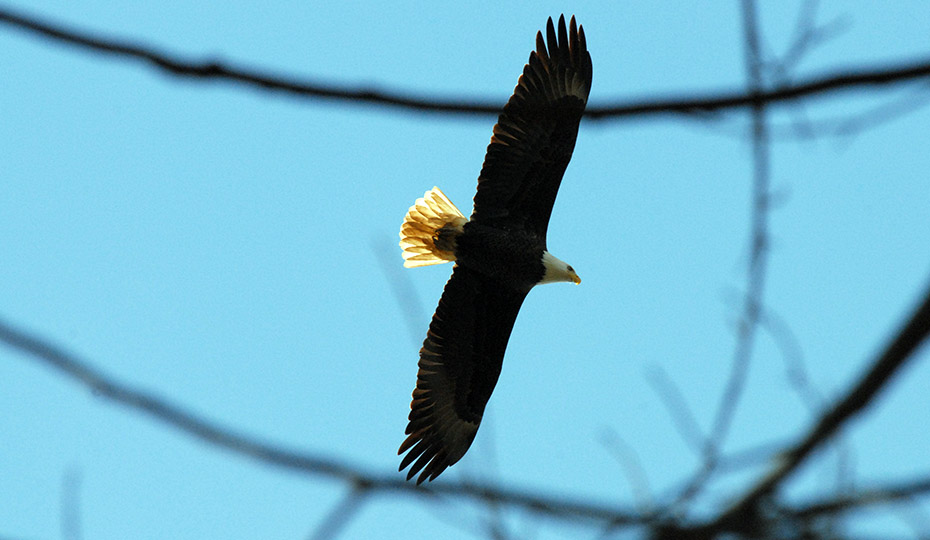 An eagle soars at the Buck plant in Salisbury, N.C.

While bald eagles were removed from the federal list of threatened and endangered species in 2007, they remain covered by the Bald and Golden Eagle Protection Act.

This year’s aerial survey was a three-day tour along the Catawba and Yadkin rivers. Sporer and Ricks found 35 bald eagles on the first day, a 110-mile flight from Lake Wateree in South Carolina to the southern edge of Lake Norman north of Charlotte, N.C. On day two, they saw seven eagles from Lake Norman up to Lake James, while the team sighted 23 eagles on their final run, from Lake Tillery to Blewett Falls Lake in the Yadkin-Pee Dee River basin in North Carolina.

On Lake Norman, the day’s first eagle nest was identified less than a mile from Marshall Steam Station, at the top of a pine facing the power plant. Spotted shortly after 9 a.m., the female was nesting on one egg while the male was away, likely out hunting. Females typically don’t leave the nest until temperatures rise above 55 degrees.

This nest sits on a company-owned peninsula visible from North Carolina Highway 150, behind a submerged wall that separates the public lake from cooler waters near the steam station intake channel. Beyond protecting the forest immediately around the nest, Duke Energy also coordinates all activity on Marshall’s adjacent parcels to ensure the birds remain undisturbed. Eagles have returned to this nest each year since 2016, after moving from across the cove when a nest was damaged during a storm. 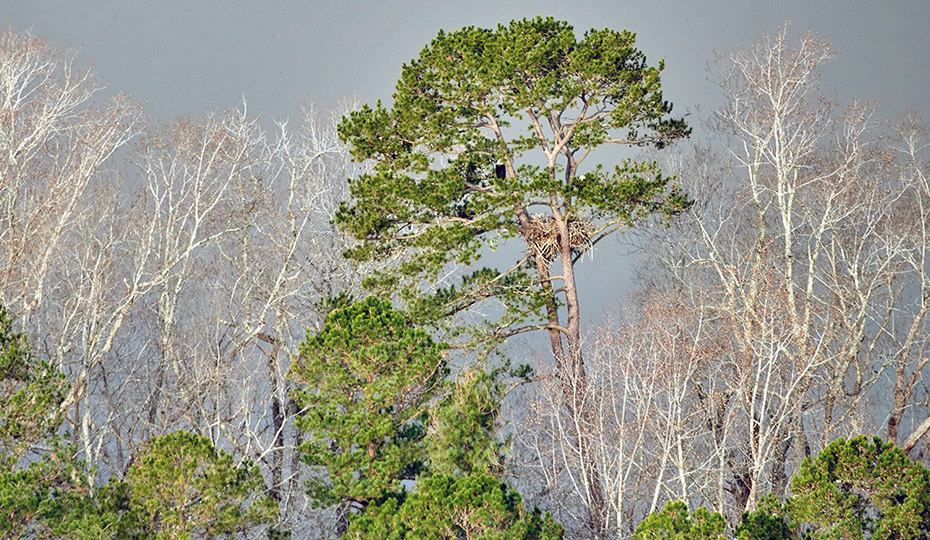 Eagles in the Yadkin-Pee Dee river basin in North Carolina.

The aerial survey is far from the company’s lone method for monitoring eagles. In early March, Sporer visited Buck Steam Station before dawn to set up 50 feet from a nest beside the company’s coal ash basin. Given this nest’s proximity to company operations, Sporer studies its activity from the ground monthly from November to June.

Though the nest is not within the ash basin itself, observing the eagle’s behavior while construction takes place on a nearby coal ash reprocessing facility is a critical way Sporer ensures that one environmental priority – ash recycling – doesn’t adversely affect another. 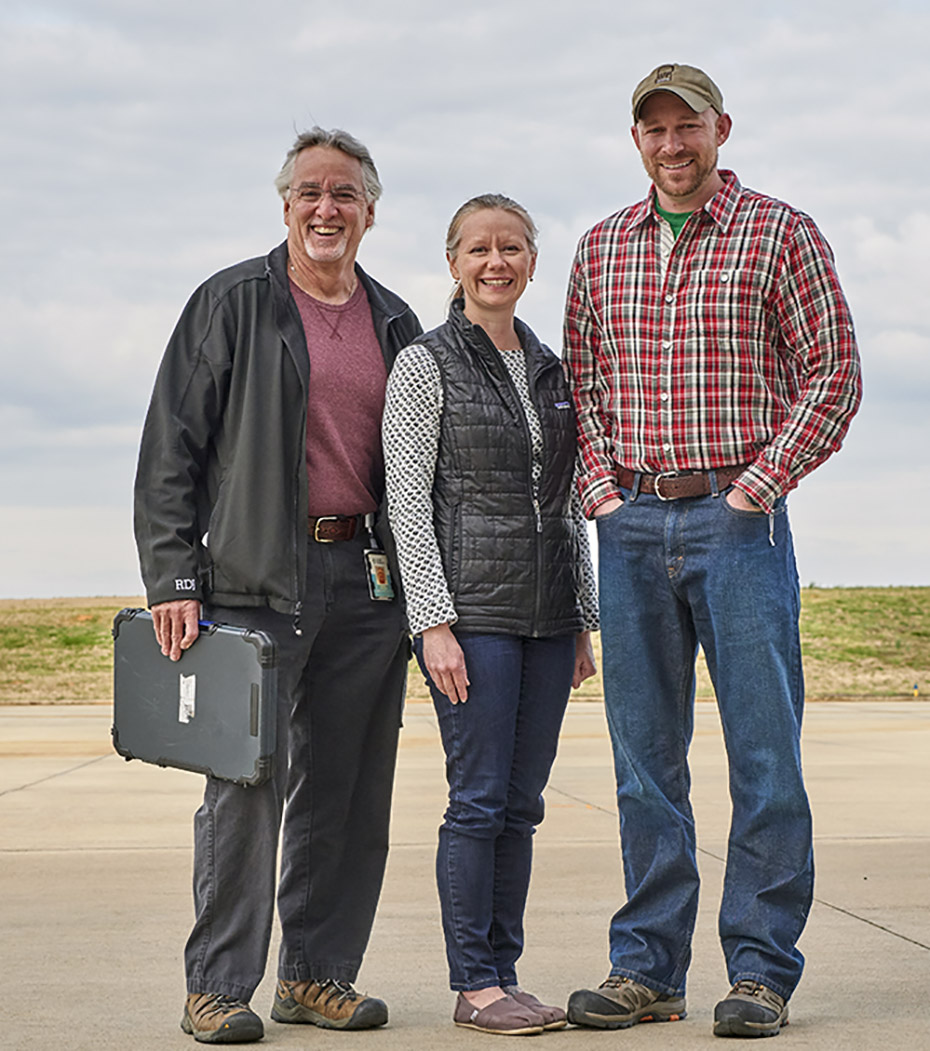 The eagles near Duke Energy facilities continue to thrive. For example, the nest beside Buck’s ash basin has hatched two chicks a year for at least eight years; long-time Buck employees believe eagles have nested there for decades. And the overall eagle count along the Catawba-Wateree basin has grown since aerial surveys began in 2016, from 26 that year to 42 in 2019. But the eagle population from Lake Norman to Lake James is lower than in other areas, primarily due to development.

“The rapid changes around Lake Norman and to the north are obvious when you’re tracking it year to year from the air,” said Sporer. “It’s amazing to see how many eagles are at the lower end of Lake Wateree, for example, and that’s partly because it’s the least-developed land along the 300 miles we survey in that river basin.”

“We know what eagles will tolerate and what has the potential to disturb their habitat, and we build that into our daily operations as well as long-term planning,” said Sporer. “My job is to make sure eagles get to keep doing eagle-y things.”

Duke Energy is committed to environmental stewardship beyond monitoring for eagles along its Catawba-Wateree lakes.

After collaborating with stakeholders, the company developed the Catawba-Wateree Shoreline Management Plan to manage the 11 lakes in the Catawba-Wateree reservoir system. As part of its federal license, Duke Energy oversees permitting for piers, docks landscaping and other vegetation.

Eagles typically choose islands or remote areas far from homes for their nests, so it is unlikely a homeowner’s project would encroach on an eagle’s nest.

Lake neighbors play a critical role in preserving the environmental, recreational and cultural value of these habitats. Before undertaking work along shoreline property at a Duke Energy lake, contact LakeServices@duke-energy.com or call 800.443.5193.