She preaches and teaches reading and writing

If Deanna Cureton’s students at Charlotte Engineering Early College ever feel overwhelmed by the challenge of becoming the first in their families to graduate from college, they know their teacher can empathize.

Cureton was the first in her family to get a degree.

Cureton, who is 38, was born to a teenage mother and for many years her family struggled just to get by. She paid for college and graduate school with scholarships and loans – and didn’t finish paying off her debt until three years ago.

“That debt is crippling,” she said. “This school gives them a jump-start on life.”

Roughly half of the 263 students in the school will be the first in their families to attend college; more than half come from economically disadvantaged households. When they graduate, they will have earned up to 60 hours of transferrable college credit, the equivalent of two years, tuition free.

The accelerated learning school, which began in 2014, is a project of Charlotte-Mecklenburg Schools and UNC Charlotte, and is located at the college campus. It allows students to take college-level courses while completing high school requirements. The curriculum focuses on science, technology, engineering and math (STEM), with an emphasis on energy and engineering. 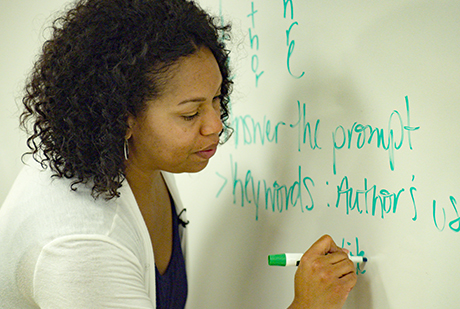 Duke Energy believes in the importance of programs that foster an interest in STEM among students. And so the company announced it will donate $900,000 toward the program, part of a $2 million contribution to UNC Charlotte. The remaining funds will benefit the Women in Computing Initiative, among other programs.

Cureton doesn’t teach any STEM classes. She joined the school in 2015 as an English Honors teacher. But whether students aspire to become engineers, football players or artists, she is “constantly preaching and teaching the importance of reading and writing.”

“How are you going to understand your football contract if you don’t know how to read?” she asks her students.

Zoey paraphrased advice Cureton offers when students fall behind on assignments, what Cureton calls her “Come to Jesus Meeting.” “You’ve got to get a head start,” Zoey said. “If you don’t learn how to do it now, you’re not going to know how to do it later.”

When Cureton was Zoey’s age, studying at South Mecklenburg High, she thought that to be successful she needed to become a doctor or lawyer. She doesn’t like blood so that left law.

She earned her bachelor’s degree from Winston-Salem State University and met her future husband while studying for the Law School Admission Test. Donald Cureton Jr. is now a district court judge. But Deanna Cureton realized that teaching – not litigating – better suited her personality. She got her master’s degree in English with a concentration in African American literature from North Carolina Agricultural and Technical University in 2001.

In the years since, she has found success in teaching. Charlotte-Mecklenburg Schools named her its Teacher of the Year for 2016-2017. 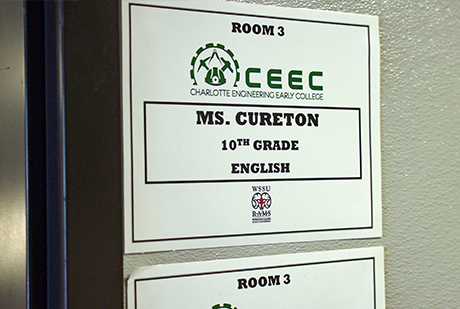 “She’s not just a great person, she really cares about the kids,” said Principal Will Leach. “She came back from maternity leave and embraced new concepts of teaching. Being a teacher here, she’s not on stage. She’s a facilitator.”

Said Cureton: “I want my students to be able to think beyond their own personal experiences, sympathize with others, interact in a diverse population and excel in a community.”

And be debt free after college.

In her classroom, you’ll find no individual desks. Students collaborate in groups around tables. Meera Brennan, 16, said she’s learned as much about working with other people as she has about reading and writing, and that’s a good thing.

Cureton will teach the same students English Honors from ninth through 12th grade – they’ll be juniors next year – and the bond between the students and their teacher keeps growing.

After the final bell sounded on the last day of school, Cureton stood outside her classroom, a radiant smile on her face and Adidas athletic shoes peeking out from beneath her long black and white dress. She was looking forward to spending the summer with her daughter, Dea, who is 4. But she would miss her students, and was there to wish them all goodbye.

One by one, boys and girls from her class broke free of the departing stream. They had one last thing to do before summer vacation: Hug “Momma Cureton.”