On cold winter days, Jayna Grassel will crochet a hat to sell, but sometimes puts it on her own head instead.

Her creations often help her combat the chill in a Pittsburgh apartment that can get quite drafty. In 20 minutes she can stitch a pair of mittens; a scarf takes her 30, and a sweater, about six hours. She's about four times faster than the average crocheter, so that sweater would take an average crocheter about 24 hours. 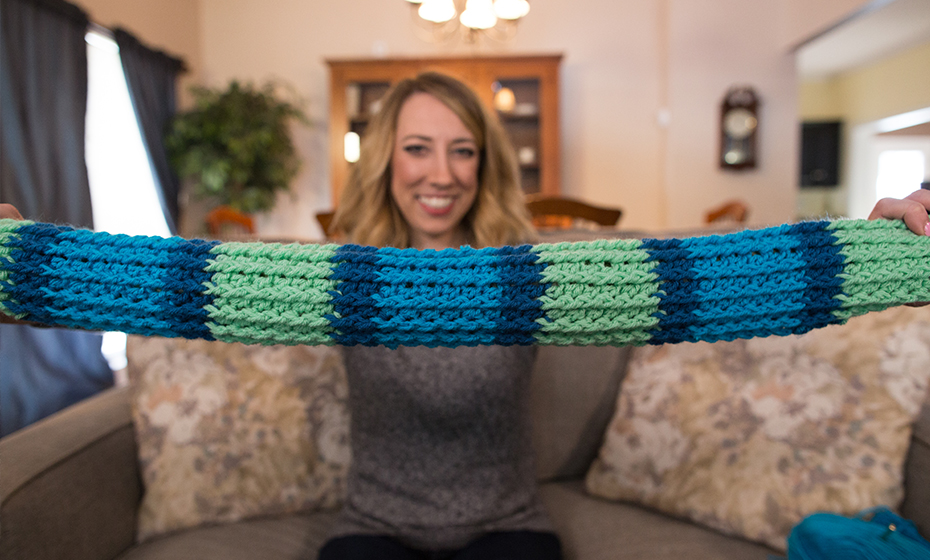 Grassel, 28, whose skill and speed makes her an elite crocheter, is sharing her talents for a Duke Energy campaign designed to help customers conserve their energy use – and keep costs down – during a winter of excruciatingly frigid temperatures.

The new public awareness video she stars in is a light-hearted take on how a little creativity and a few simple changes can go a long way. It should resonate especially with parents.

She plays a mom who counteracts her child’s energy use excesses with her speedy crocheting. When the boy comes in from outside and leaves the door open, she quickly closes it, then crochets a door slip to keep drafts out. When he flickers smart lightbulbs controlled by a tablet, she whips up a pair of mittens so he can’t use the touch screen. Then she crochets an engulfing sweater that makes him unable to touch the actual thermostat.

Education: Bachelor’s degree with a major in entrepreneurship from Grove City College in western Pennsylvania.

Volunteer work: Teaches crochet classes at the public library, serves as secretary and webmaster for the annual Delmont Apple and Arts festival, and in 2013 participated in “Knit the Bridge Pittsburgh,” a community-building exercise where hundreds covered the Andy Warhol Bridge with colorful knitted and crocheted blankets.

“It makes people more aware of how to keep the heat in and the cold out,” said Grassel, who was recently in Boston during a bone-chilling blizzard and at times kept her mittens on even indoors. “It’s one small way people can be conscious of saving energy: Bundle up, add an extra layer and lower the thermostat.”

She started crocheting at age 8, learning the craft from a family friend. At 14 she perfected the techniques and became much faster during a summer of bed rest after surgery to correct scoliosis.

She has met Lily Chin, who once famously crocheted a sweater on national TV for talk show host David Letterman. She has corresponded with Lisa Gentry, who holds the Guinness World Record as the fastest crocheter, with 170 stitches a minute.

Like Chin and Gentry, Grassel is a star of the crocheting world. In a 2013 YouTube video, she attempted to beat Gentry’s record and came up short by just a stitch but has since attracted more than 76,000 viewers.

By day, Grassel works in an office job and teaches a college course on the side. In her spare time she offers free crocheting classes at her library, and makes apparel to sell.

As a child learning the craft, most of Grassel’s crotchet pals were older women. She says that’s changing as crocheters connect with each other locally during community events and nationally through social media.

“It’s a very communal craft, you can sit and talk while you do it. I think it’s starting to get a lot more popular for younger people, especially because of all the interest in DIY projects,” Grassel said. “It’s cool to be a crocheter.”

She says that like many people, her energy use awareness started at a young age, when she and her siblings would leave the front door open on cold days and her father would close them.

“I’m not paying to heat the whole neighborhood!” he’d say.

The family still laughs at some of his methods – including when he removed a few overhead lightbulbs during a fantasy football draft party to save on the electric bill. As a joke, someone at the yearly event will put a dollar or two into a cup with a plea for him to lighten the room up a little more.

Bill Grassel said Jayna’s methods may even top his. 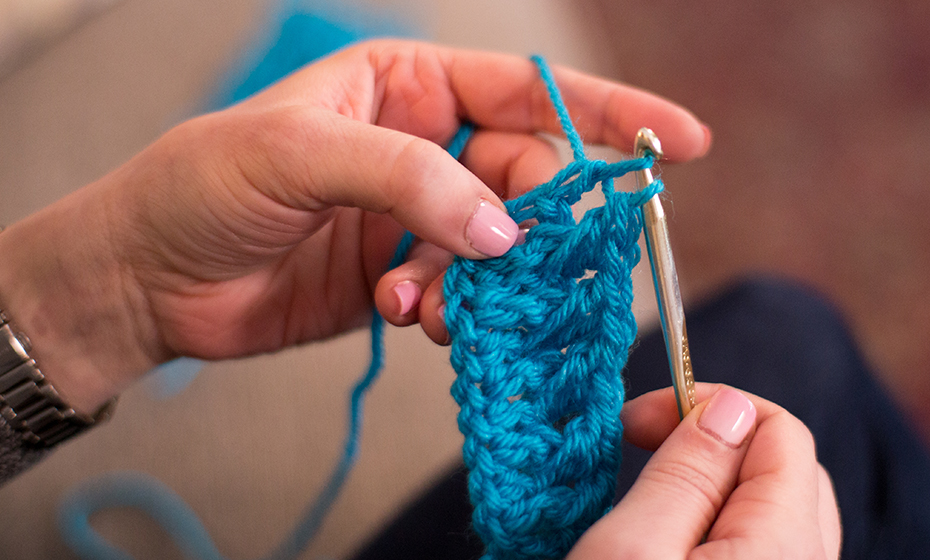 “She was a quick study … and even mastered the art of turning out lights when leaving a room,” he said. “Jayna’s the most like me when it comes to saving money on energy use. Besides having a great understanding about the correlation between household temperature and cost, she makes fantastic crochet items that help retain body heat. This is an unbeatable combination.”

Jayna Grassel is single but wants to get married and have her own children some day. As a parent, she said, she’ll stress the importance of conserving energy.

She is well on the path already. Take her apartment, where she sets the thermostat to 57 degrees during winter days. Just recently, she had guests coming over after work and realized that some of them might be chilly. She told her dad that she’d just ask them to do a few jumping jacks to warm up.

Besides crocheting, here are some tips for keeping warm in winter: