For Women’s History Month, she gives this student a behind-the-scenes look at her job 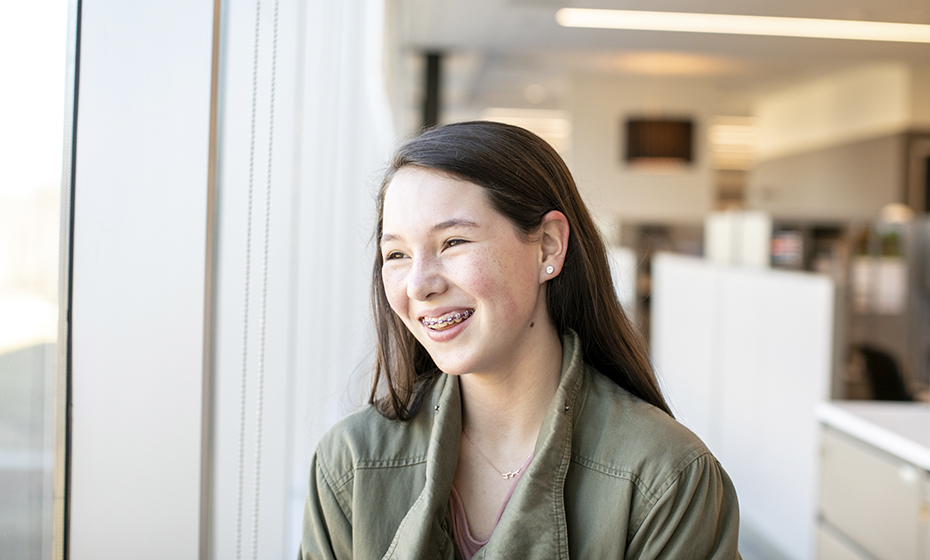 Eighth-grader Nina Cancro walked into Duke Energy’s Distribution Control Center not sure what to expect. That’s understandable because people rarely see this side of energy delivery, but Sharene Pierce was ready to give her a tour.

Inside the Distribution Control Center, employees monitor the energy grid 24/7 and correct any issues that affect energy generation and delivery. Pierce is the general manager of grid management. She’s responsible for about 60 engineers and technicians who monitor the substations, power poles and lines that make up the distribution system in seven states. 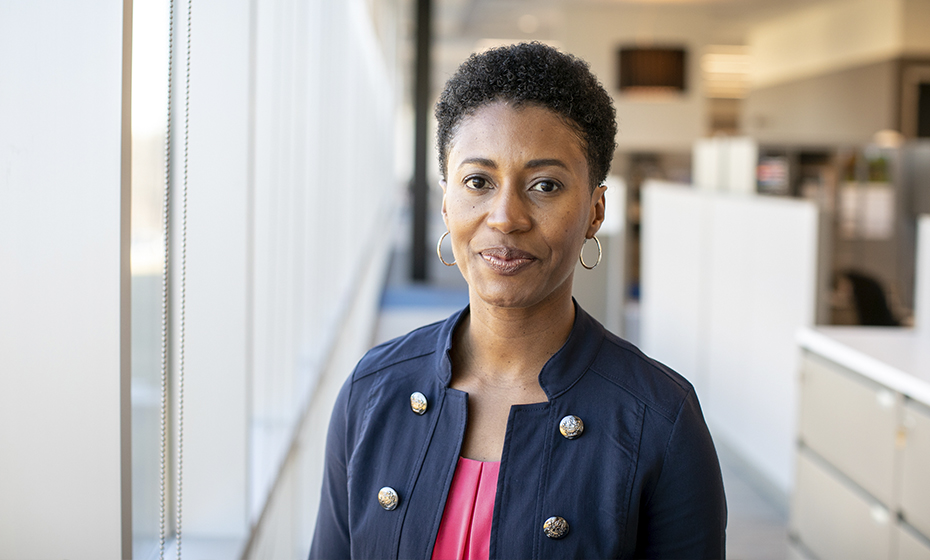 Before starting the tour, Pierce asked if Nina thought about electricity often.

No, Nina said, but she uses it every day.

“That’s actually a good thing,” Pierce said. “We want electricity to be like oxygen – you just breathe. You don’t think about oxygen on a daily basis, but our job is to be sure that, just like oxygen, your electricity is always there.” 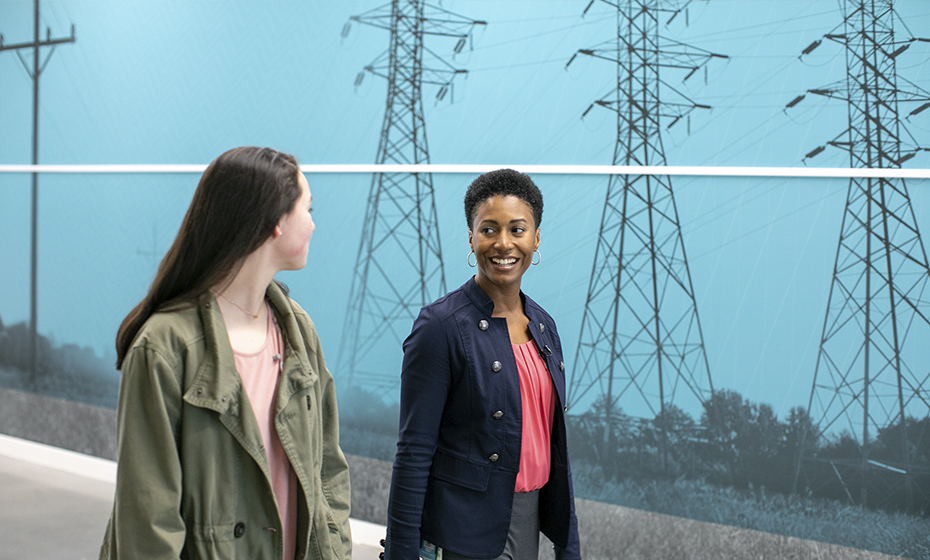 The Distribution Control Center opened last year. The employees can see energy being transmitted in real time and spot issues as they emerge. With new technologies being installed, they can fix some problems remotely and more quickly than ever, which means fewer and shorter outages for customers.

Pierce, who has worked at Duke Energy since she was a student at NC State University 19 years ago, said with all the advancements in technology, it’s hard to believe this work used to be done manually or on paper.

“We’ve gotten to the point now, that every power line that we have – the ones you usually ignore when you’re driving down the street,” she said, “are actually depicted in the software that we have.” 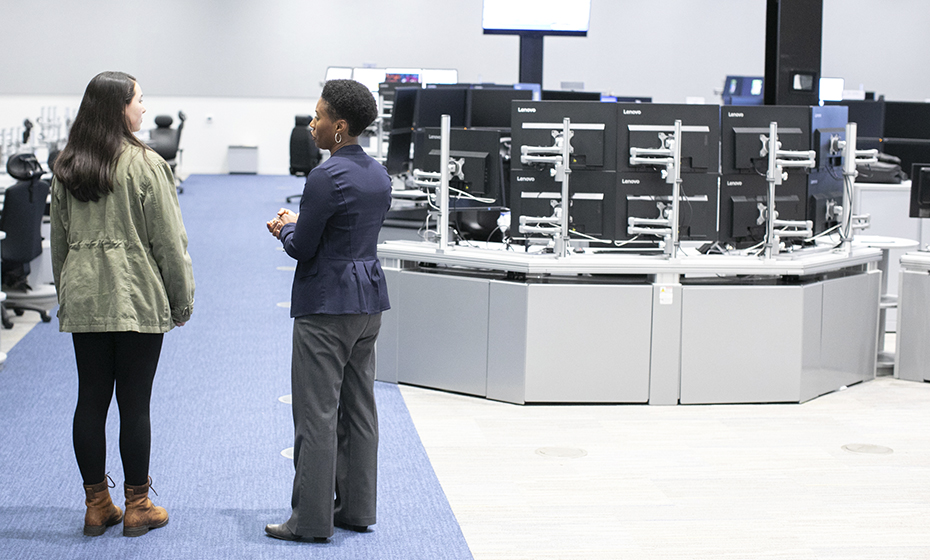 The employees here work 12-hour shifts, so their sit-to-stand desks get a lot of use. Each employee has eight monitors to keep tabs on applications and conditions including weather, current outages, customer demand and energy production, and systems that remotely control breakers and other equipment.

Operators sit on one side of the room, and they’re responsible for several things. They might see where a tree has fallen on a line and dispatch a team to fix it. They also talk to customers. Smart meters allow information to flow back-and-forth between your house and Duke Energy, so when you call in to report a problem, operators can look up your meter and determine if the problem is at your house or with power delivery. During storms, Pierce said, they’re busy trying to restore power as quickly and safely as possible, too.

“We know people want to get everything back to normal,” she said, “so, we give it everything we’ve got to get the power back on.” 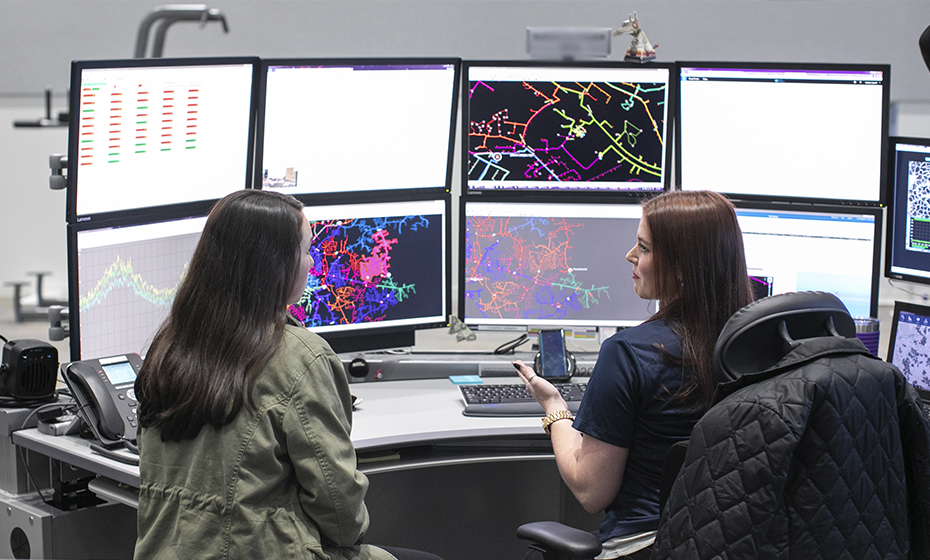 On the other side of the room, Pierce’s team of technicians and engineers are grouped together. Nina met Sarah Kutcher, who graduated from Clemson University as an electrical engineer in 2010 and has worked at Duke Energy since. As a grid engineer, Kutcher studies how to reroute power using switches and circuit breakers during unplanned outages or when crews need to de-energize a portion of the grid to work safely.

She’s also optimizing self-healing technology, an automated network that will shorten outages. The technology is installed between substations, so when a car hits a pole for example, the self-healing devices will automatically sense the disruption and isolate the damaged section of the grid. Then, the electricity will be rerouted from an alternate source and fewer people will be without power.

“It’s cool to see behind the scenes of how everything works,” Nina said, “and how energy is transported from one place to another.” 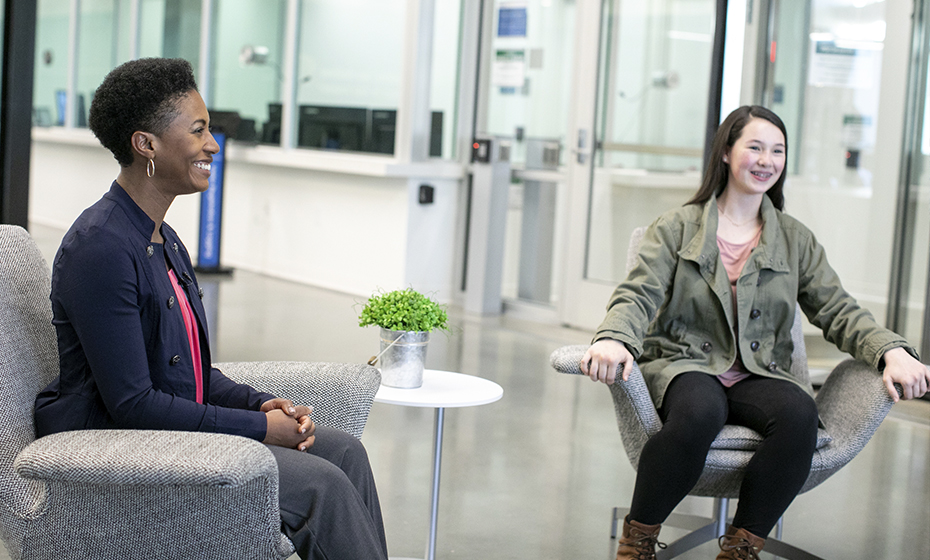 Kutcher said she loves her career in engineering – it relates to what she studied in college and allows her to do what she’s always wanted: solve problems and help people. Pierce agrees that it’s a meaningful career.

“We touch a lot of lives,” she said. “When I go home at night I can say, ‘I ensured that 24 million people had electricity. That’s pretty important.’”

“It’s motivational to hear that as a woman,” Nina said, “you can do exactly what you want.”

Have fun. You’ve gotta study, but it’s also important to have fun because you have several more years of school and work, so fun is just as important.

Explore. There’s so many options in terms of what you can do for your career. It doesn’t matter if you’re a girl, or a boy, what your skin color is, or where you come from. We have a society now where you can do whatever you want to. There might be something out there that you don’t know about yet.

Don’t try to do it by yourself. I’ve always had the support I needed to be successful starting from the first day that I walked in as a student. I’ve had mentors -- male and female -- who said, “if you want to learn, I’ll teach you.”

This is the first in a series for Women’s History Month where female students met with women who work at Duke Energy to tour each employee’s workplace and learn about careers in the energy industry. By showing the girls careers they were unaware of, we hope to inspire them to cast aside gender roles and set their own path.