Bruce Wood of Sunstore Solar at a job site in Campobello, S.C.

Inverters and other equipment installed on the side of a home in Campobello, S.C. that has solar panels on the roof.

Keith Murlless uses his cell phone to watch electricity production from the solar panels installed on two sides of the roof  of his home in Lyman, S.C.

Since 2014, Duke Energy’s Solar Rebate Program has paid almost $50 million to South Carolina customers who have invested in solar power at their residences or businesses. The rebates help pay the cost of installing solar panels, making the technology more accessible to the company’s 730,000 customers.

One of those customers is Keith Murlless, who recently installed solar panels on top of his home in Lyman in Spartanburg County.

Murlless said he believes in renewable energy and is proud to participate in the program. “Lower power bills are nice, too,” he said.

He said he expects to save thousands of dollars over 25 years. “Without the Duke rebate and the state and federal tax incentives,” he said, “the project would not be cost effective.”

The rebate of $1 per installed kilowatt, he said, amounts to almost $10,000 at their home.

South Carolina is not among the national leaders for solar energy but that could change.

In 2014, the state passed an innovative renewable energy law – Act 236 – that established a road map for the technology. A joint effort between energy companies, solar businesses and environmental groups, it was passed unanimously by the legislature and signed by Gov. Nikki Haley. 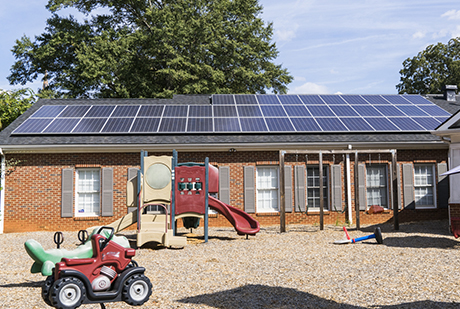 “Act 236 opened the door for us to offer a variety of solar programs that were attractive to the customer, made good business sense for the company, the solar industry and customers,” said Clark Gillespy, Duke Energy South Carolina state president. "Solar can be good for our business when we’ve got the right policies in place.”

In many states, agreeing on renewable energy policies can be controversial.

Battles have taken place in Arizona, Nevada and Maine (just to name a few). But South Carolina managed to avoid that. It crafted a law that’s been widely supported, even by environmental groups such as the Southern Alliance for Clean Energy.

“South Carolina has been accused of being slow to embrace solar,” wrote Gillespy in a column in 2014. “On the contrary, I prefer to think the state has been very methodical and intentional in embracing solar – so much so, South Carolina may now be the model other states will want to follow.”

South Carolina Electric & Gas, which has more than 700,000 customers, also offers residential and business solar rebates. Its residential customers used all of their allocation of solar incentives by mid-2016, according to cleanenergy.org.

With more than 30 megawatts-ac of solar power scheduled to come on line, Duke Energy is more than halfway to the 53-megawatt goal cited by the law. 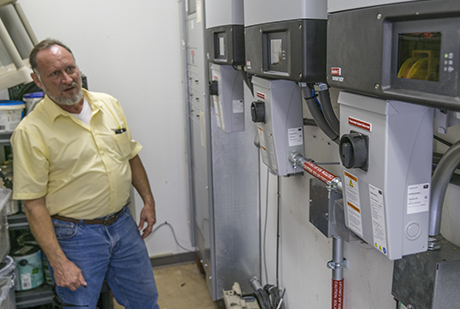 Bruce Wood of Sunstore Solar shows off the interior installation that control the solar panels.
Others are happy, too. More than 750 residential customers and more than 35 business customers have applied for solar rebates. The rebate provides $1 per watt-direct current for qualified residential customers who install systems up to 20 kilowatts-ac on their property; and for business customers who install systems up to 1 megawatt-alternating current on their property.

Once the program is fully subscribed, customers can continue to install solar power using tax credits through the state and federal government. Customers may choose to use solar power on-site through private solar credits – or sell it to the company under Duke Energy’s approved tariffs.

“We are proud to showcase green energy production,” said Murlless, the Duke customer who installed panels at his home in Lyman. “Our rooftop installation is attractive, and it’s fun to watch our actual energy production by day, week, month and year with convenient online applications.”