Bats get an undeserved bad rap, in Tim Hayes’ opinion.

The Duke Energy biologist believes the sharp-toothed, pointy-eared creatures are some of the most misunderstood and useful animals on earth.

“I can't think of another wildlife species that does more good things for people than bats,” he said. “One benefit is they consume enormous amounts of insects, but they've got a bad image and most people think they’re creepy. There’s not another critter I can think of that provides more value to people.” 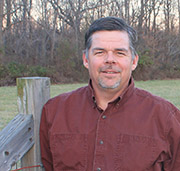 Why are bats attracted to wind turbines?

Hayes, environmental director for Duke Energy Renewables, has such a keen interest in bats that he spent months on a national committee charged with finding ways to prevent wind turbines from accidentally killing them. He’s excited the wind energy industry recently adopted operating procedures his group proposed to curb the unintentional deaths.

“Wind energy is clean, with no emissions, and it doesn’t use any water,” Hayes said. “However, there is no free lunch, and every form of generation has an impact on the environment. We’ve got to figure out how to deal with the issues we have.”

Although estimates vary, scientists generally agree that wind turbines kill hundreds of thousands of bats each year in the United States and Canada.

No one knows exactly why bats are attracted to turbines. Though not entirely blind, as some believe, bats do have poor vision, leading some scientists to theorize the animals mistake the wind turbines for large trees. It’s a problem that's plagued the wind power industry for years. The bats affected the most are the tree-roosting type, but turbines occasionally kill cave-dwelling bats, including some endangered species.

In fact, recent infrared thermal imaging video shows bats “swarming” around turbines, where they eventually collide with the blades.

Turbines kill the most bats in the late summer and early fall, which coincides with their fall migration and breeding season. Some scientists believe the attraction to wind turbines is related to mating or heavy feeding behaviors, or both.

Hayes worked on a committee the American Wind Energy Association, a trade group, appointed to study the bat problem.

Under this new operating practice, known as “feathering,” the turbine control software is changed so that the pitch of the turbine blades is feathered to slow down the turbine rotor rotation speed to one or two revolutions per minute during low-wind conditions in late summer and early fall. Research has shown bats are most at risk of collision during such times. Slowing down rotor speeds reduces the risk of injury and death. The new protocols are based on over 10 years of research by the Bats and Wind Energy Cooperative. The group proposed new voluntary operating procedures that went into effect in the fall of 2015 and are expected to reduce bat deaths by as much as 40 percent.

“Our industry values all wildlife and habitat,” John Anderson, a senior director for the American Wind Energy Association, said in a statement recently. “By proactively employing this measure to reduce our already low environmental impacts further, consumers can have even more confidence in buying clean, affordable, and carbon-free wind energy.” 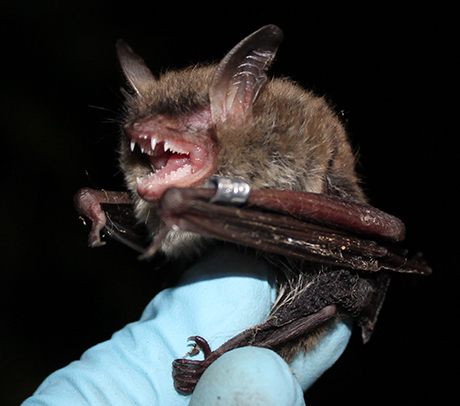 Hayes expects the business impact of the new measures will be minimal. “Our engineers haven’t seen any equipment issues and loss of generation is negligible,” he said. “You're not producing electricity anyway during these low-wind conditions, so you're not losing revenue.”

Duke’s wind farms have fully implemented the new procedures at 11 sites and work is continuing at other sites to adopt the new practices. In fact, when the company builds a new wind site, these new operating parameters are programmed into the turbines.

“We’re on the leading edge of addressing this,” Hayes said. “Whatever the environmental issue, Duke prides itself in meeting it head-on.”

As a self-professed “bat man,” that means a lot to Hayes and also to his 22-year-old daughter, Hannah. She shares her father’s fascination with bats and is studying their habits in her master’s degree program in Arkansas. She spends her nights hunting for the homely mammals and pings her dad on his cellphone when she makes an especially interesting find, often waking him.