Houses at Cliffside Village in 1939.

Houses at Cliffside Village in 1940.

Workers at the Catawba railroad branch at Cliffside in 1939.

Digging a foundation at Cliffside Village in 1939.

Temporary mess hall at Cliffside in 1939 during construction of the power plant.

In this 1939 photo, houses at Cliffside Village are visible on the top of the hill.

As Duke Energy demolished one of the last vestiges of the historic Cliffside Steam Station in Rutherford County, N.C., Reno and Betty Bailey quietly worked in their home to preserve the history of the community the plant helped build.

The couple has worked most weekdays for 13 years at their home in Charlotte more than 70 miles east of Cliffside on remembercliffside.com, a site dedicated to preserving the memory of the community.

Thousands of photos, historic records and essays live on the website. Each memory of the town is submitted by Reno's former neighbors who lived in one of two company villages: Cliffside Mill village and Duke Power village. These submissions – filed, transcribed and edited by Betty – are filled with correspondence of a bygone era. 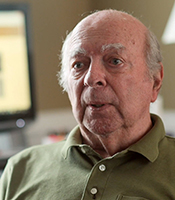 Duke Energy demolished the station’s old powerhouse as part of the company’s decommissioning program to update its power plants and dismantle older coal-fired plants no longer in use. Duke has completed six implosions in the Carolinas since 2013. The Baileys and others who lived in the community have done their best to preserve a time when life was simpler and neighbors were closer. So hearing about the implosion of the historic powerhouse in October 2015 surprised them.

The Cliffside station began operating in 1940. Its original four units were closed in 2011 and replaced with cleaner, more efficient units. The company added unit 5 in 1972 and unit 6 in 2012. Both make up the James E. Rogers Energy Complex.

The powerhouse, which once contained the boilers and other equipment, was one of the last traces of the village.

Decades ago, it was the center of a thriving village of employees.

Without today’s modern roads and communication tools, Duke Energy had to offer housing to recruit employees to move to the rural North Carolina foothills in the 1940s.

Reno Bailey talks about preserving the legacy of Cliffside

Bernice Padgett was one of the first kids to move to the village when her father, T.C. Raines, transferred from Buck Steam Station in Rowan County, N.C., to Cliffside in 1939. For their home, her mother picked a big red clay lot under two sycamore trees. Months later, Bernice, four of her siblings and her parents moved in before the lawn had a chance to grow.
Padgett’s childhood neighbor, Jim Cauble Jr., recently published a map and list of village residents to remembercliffside.com. He started with telephone records but relied on Padgett and other neighbors’ memories to document who lived there. Cauble, whose father started as plant foreman and became chief operator, delivered newspapers in Cliffside for The Charlotte News. During construction of two power-generating units, he was living large, making $10 a week as he pedaled his bike and slung newspapers to the transient workers living in small wood-frame structures covered in tar paper and nicknamed “construction shacks.”
Duke kids, like Cauble and Padgett, were bused from their village to attend schools with children of cotton mill families, like Reno, whose father hopped between jobs at farms and the mill. Reno remembers when they came.

“We had six-man football teams and three of them were usually Duke Power kids,” said Reno. “They changed expectations and made us think about things bigger than working at Cliffside Mill, like college.”

Kids from both villages spent summer days barefoot, riding train boxcars to the swimming hole, hitchhiking to nearby towns and playing baseball. It was just part of growing up then but it would terrify parents today.

“A few years ago my daughter-in-law asked how I felt about growing up in this old town, and I said it was a pretty damn good place to grow up,” said Cauble.

Change came to the village

When Cauble graduated from Cliffside High School and started attending North Carolina State University in 1949, Duke Power village began to change. He remembers watching his childhood babysitter's six-room house get plucked from its yard, hauled away on a steel platform and dropped on a 5-acre plot in the countryside about 3 miles away.

As roads and telephone lines improved, more station employees began commuting to work, and the company offered village residents the opportunity to own the homes they’d rented for years. Other employees slowly bought – usually for about $1,000 – and moved the homes until only the village clubhouse remained.

Through the years, the clubhouse hosted countless potluck gatherings, ice cream socials and square dances. Today, after being restored by the company and moved half a mile, it’s used as meeting space.

A labor of love

Until the village site was graded in 2008, you could still walk along a few gravel streets. Concrete steps that used to lead up to village homes still stood.

“It’s another landmark going away,” he said. “I’m sure that the people who worked over there hate more than I to see it go.”

With most of the two villages gone, Reno said his digital artifacts are all that's left. Reno wants to move the site to a more modern platform but needs help. Although the Renos are in their 80s and experiencing health issues, they still work tirelessly to preserve a period in history that strengthened family life and forged new opportunities for generations.