Driving through the patchwork of cattle pasture and brush at Duke Energy’s Los Vientos Windpower Project, Sara Weaver explained why south Texas was the perfect location to find a way for bats and wind energy to coexist, but it wouldn’t be easy.

The Rio Grande Valley has more bats than many parts of the country and an unexpected number were passing through Los Vientos, but many were killed flying into the wind turbines that cover thousands of acres near Brownsville. To earn her doctorate in biology from Texas State University, Weaver led a two-year study that proved a new technology could significantly reduce the number of bat deaths. 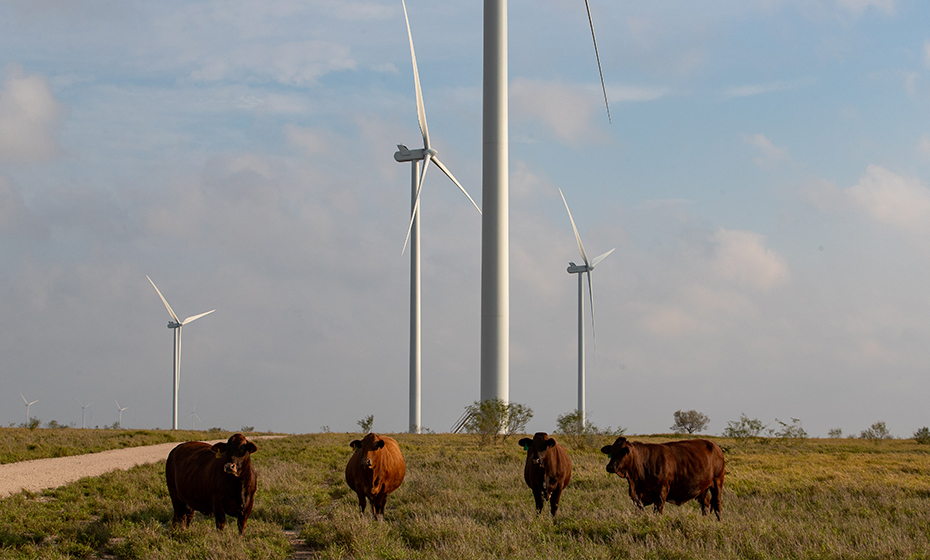 The Los Vientos Windpower Project covers thousands of acres in south Texas, where bats are plentiful. It was the perfect location for Sara Weaver to study how bats and wind energy can coexist.

The Bat Deterrent System, an ultrasonic acoustic device developed by NRG Systems, reduced overall bat fatalities by 50 percent with reductions of nearly 80 percent in some species. The study, published in May, was so successful, that Duke Energy will equip 255 wind turbines at Los Vientos with the device. It will be the first commercial-scale installation in the continental United States.

Hundreds of thousands of bats die each year at North American wind farms, and it can be difficult to predict when bats will be affected at a site. Pre-construction surveys at Los Vientos showed little bat habitat, and Duke Energy along with state and federal wildlife agencies expected little impact to bats. However, once the site began generating power, surveys showed higher-than-expected bat fatalities.

This suggests bats may be attracted to the turbines, and researchers have many theories as to why. Bats may think the turbines are tall trees good for roosting. The critters might also think the turbine’s reflective surface is drinking water, or maybe bats are just curious and want to inspect the new structures. 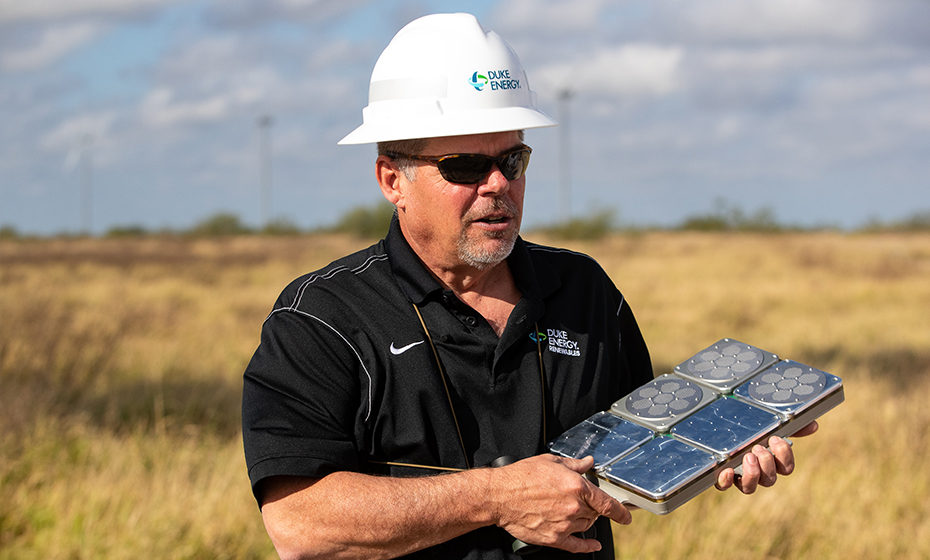 Tim Hayes holds the Bat Deterrent System, designed by NRG Systems. It's a set of six speakers that emits a high frequency from the top of a wind turbine to discourage bats from approaching.

Fatalities at this rate could cause population declines for some species. Bats, unlike birds, are mammals that live for many years and reproduce slowly – most bats have one or two pups per year. Tim Hayes, environmental development director for Duke Energy’s commercial renewable sites, admits bats have a reputation problem – many people find them creepy – but they’re an important part of the ecosystem. They pollinate, disperse seeds and eat thousands of insects every night. Scientists estimate bats in the United States provide more than $3.7 billion a year in reduced crop damage and pesticide use.

The issues facing bats are complex. Bats are small, they migrate and fly at night, so it’s difficult to learn how many are out there. Some species are struggling with the deadly White Nose Syndrome, while many others face habitat loss, pesticides and the challenges associated with climate change. Wind energy is an additional hurdle. 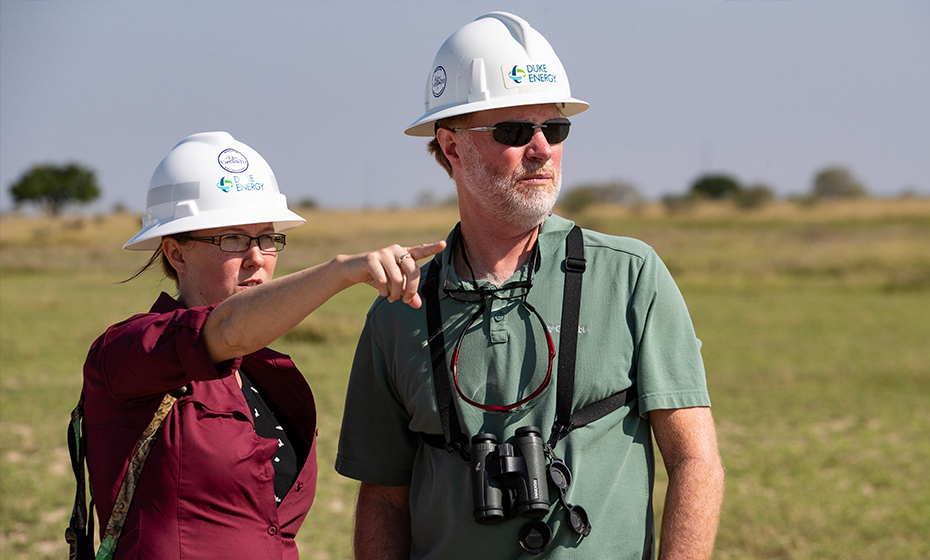 “We have to step up,” Hayes said, “and figure out ways to reduce our impacts as bats try to work through all the other challenges they have.”

When Hayes and Greg Aldrich, a Duke Energy lead environmental scientist who worked closely with Weaver on the study, noticed more bat fatalities than expected, they knew something had to be done. Through Bat Conservation International, Duke Energy was paired with Weaver, who needed a wind farm for her study. Texas Parks and Wildlife Department recognized the potential and funded her study.

The Bat Deterrent System is now one of the most promising devices available for preventing bat fatalities. Weaver, wearing a black shirt dotted with white bats, explained how it works.

The bat deterrent system, inspired by the tiger moth, floods the area with a frequency that makes it difficult for bats to echolocate, so they leave in search of a better place to hunt. Photo credit: NRG Systems

Bats use echolocation to find food, socialize, and navigate. They emit a high-frequency ultrasound that bounces off nearby objects to create a picture of the environment. Bats can determine how far away objects are based on how long it takes the sound to return. Some insects, like the tiger moth, have evolved to emit their own ultrasound as a defense against hungry bats. With the moth’s frequency filling the air, it’s too noisy for the bat to tell where the moth is, so the bat will leave and look for a quieter place to hunt.

Turns out scientists could. NRG Systems created a device – made of six speakers – that mounts to the top of the wind turbine and floods the area surrounding the blades with a high-frequency ultrasound to discourage bats from approaching. The sound does not hurt bats or nearby wildlife, and humans can’t hear it.

How Duke Energy is protecting eagles

Like bats, wind energy affects some birds. After 14 golden eagles were killed at Top of the World Windpower Projects in Wyoming, Duke Energy implemented IdentiFlight, a technology that quickly detects eagles and slows the turbine to prevent collisions.

Duke Energy was part of the technology’s early testing and was the first wind operator to commercially install it.

NRG Systems designs and builds instruments like anemometers and sensors that can withstand the strong winds, extreme heat and ice at the top of wind turbines. The rectangular device weighs about as much as a small laptop and five are attached to the turbine’s nacelle (the powerhouse at the top of the turbine.)

For Weaver’s study, the team installed the Bat Deterrent System on 16 random turbines. Each night of the study, half of the turbines had devices turned on and half were off. Field technicians, who didn’t know which turbines were on the night before, would search beneath the turbines every morning and record how many and what species of bats they found.

The study showed an overall reduction in bat fatalities of 50 percent. The technology proved more effective for some species, like the hoary bat, a species suspected to have declining populations nationwide. It showed a 78 percent reduction, and the Brazilian free-tailed bat, which made up most of the fatalities at Los Vientos, showed a 55 percent reduction.

“It’s not enough to just say this technology works, we have to take it a step further and actually use it,” Weaver said, “and that’s what Duke is doing.” 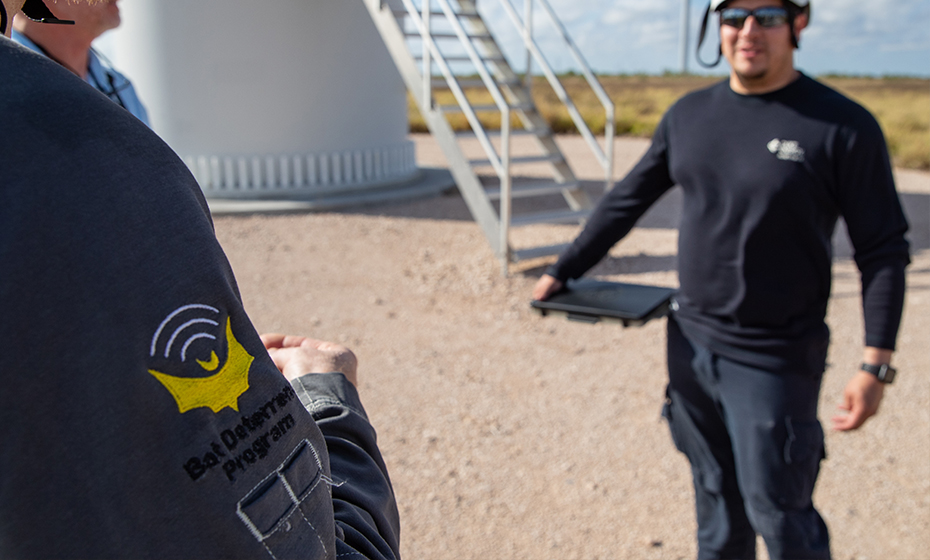 NRG Systems’ Drew Lepple and Duke Energy wind technician Jacob Noriega going up the turbine to the nacelle, where the device will be installed. Over the next four years, Duke Energy will install 255 bat deterrent systems at Los Vientos.

By 2030, the U.S. Department of Energy estimates wind will supply 20 percent of the nation’s energy – up from 6.5 percent in 2018. Texas already leads the nation in wind production, and Duke Energy plans to double its renewable energy portfolio by 2025. It’s part of the company’s goal to achieve net-zero carbon emissions by 2050, so Hayes said, it’s important they help find ways for wildlife and wind to coexist. Duke Energy was not required to install the devices, and Hayes hopes that by voluntarily taking steps to reduce bat fatalities, other wind companies will do the same.

Aldrich said as they install the devices on the rest of the turbines, Los Vientos will be like a laboratory for studying how the technology will work.

“We need more companies like this – more people – who want to get ahead of the problem and prevent it from getting to the point where we need regulations,” Weaver said. “We got positive results, but I don’t think this is the limit.”

More to be done 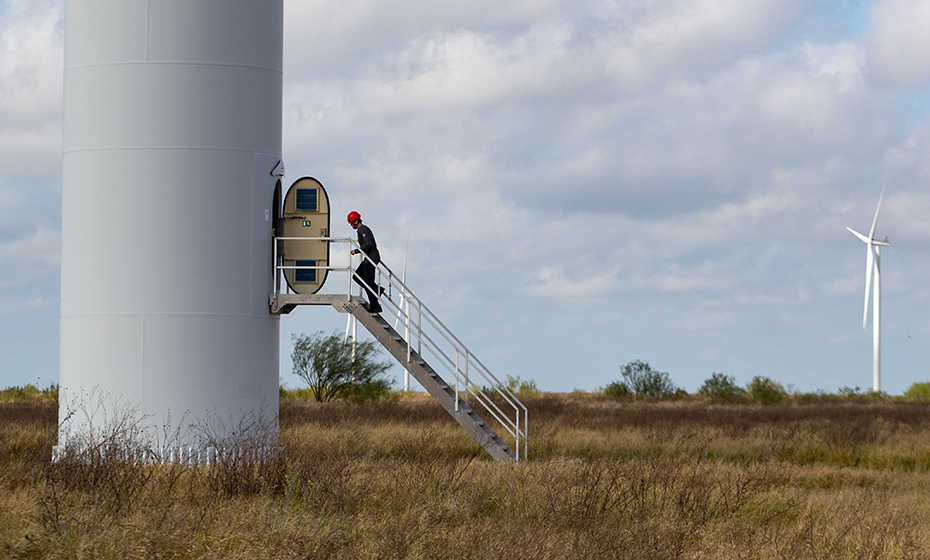 While Weaver said she’s thrilled bats are still alive because of this technology, there’s more work to be done. Some species in the study showed reductions, and others, like the northern yellow bat, did not. To find out why, researchers at Texas State University are using a special flight cage to study how different species react to the deterrent.

And, then there’s the challenge of physics. As wind turbines get taller and blades get longer to produce more power per turbine, how can we amplify the sound levels to cover the length of the blades? Are there other configurations of the speakers or placements on the turbine that would make the Bat Deterrent System even more powerful?

Weaver hopes to find out.

Walk through a forest of light at the U.S. National Whitewater Center

Utilities collaborate to expand 5G networks across the country