Duke Energy, Bayer and Integrated Vegetation Management Partners (IVM) are creating new homes for you, where you can settle in and grab all the pollen and nectar you want. 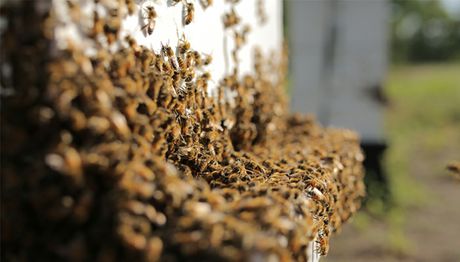 Keeping pollinators busy and healthy is important for the ecosystem. So important, that June 20 marks the start of National Pollinator Week, a time aimed at increasing awareness of the hardworking insects whose paths from plant to plant help supply the world with food.

Colony Collapse Disorder has been blamed for the loss of bees for the last 10 years. The number of bees in the U.S. has declined more than 30 percent in the last five years, a University of Maryland study found. And beekeepers in Europe in 2015 reported a 17 percent decline in colonies.

Creating pollinator-friendly habitats has become a natural outgrowth of newer, improved methods of clearing power-line rights of way. In the past, workers would mow an entire area to remove potential obstructions. What often happened was the unwanted vines and woody brush would return with multiple stems sprouting, creating thicker brush, said Jeff Racey, a Duke Energy forester. 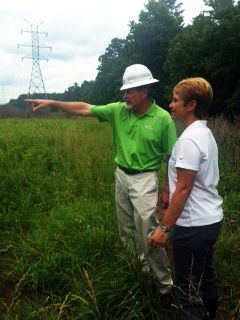 Jeff Racey of Duke Energy and Becky Langer of Bayer inspect the site in Durham, N.C.

The outcome benefits customers by reducing the likelihood of damage to power lines and is environmentally friendly, said Korey Meadows, another Duke Energy forester.

“We’re not only maintaining our reliability,” Meadows said, "but we’re increasing the number of good habitats for pollinators.”

Residents of a Clearwater, Fla., neighborhood were upset in 2015 when Duke Energy workers removed tall-growing shrubs and trimmed trees away from power lines near their homes. Some thought the workers cleared too much. In response, Duke Energy partnered with Pinellas County to replant small trees, shrubs and flowers, which have sprouted into an attractive landscape for butterflies and bees.

Beekeepers say Duke Energy, which maintains thousands of miles of rights of way in the Carolinas, Florida and the Midwest, has a unique opportunity.

“It’s a program that would have a tangible impact on pollinating insects,” said Rick Coor, president of the North Carolina State Beekeepers Association. “Utility rights of way can extend for miles. Local insect colonies would follow the plant sources. Anything that would create additional foliage for bees and other pollinators should be beneficial.” 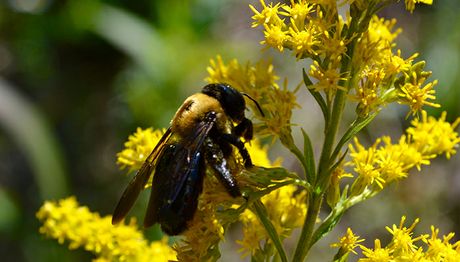 Racey and Becky Langer, of Bayer’s Crop Science Division, recently visited the Durham site and were encouraged by what they saw. “Blooming milkweed, butterflies, bees – we did see lots of pollinators,” Langer said.

Bayer is on a quest to plant 50 million flowers as part of its “Feed a Bee” program.

The company will plant 200 seeds each time someone watches its two-minute Feed a Bee video and shares it.

“To get someone as notable as Duke Energy promoting this idea of pollinator-friendly habitats is a great thing for both companies,” Langer said. “If you work on building the habitat for them, pollinators will come.”

Said Rick Johnstone, president of IVM, “Why not manage those millions of acres using techniques that will improve them? All those rights of way provide pollinator habitats the world needs. You work with nature instead of fighting it.”

You can feed a bee